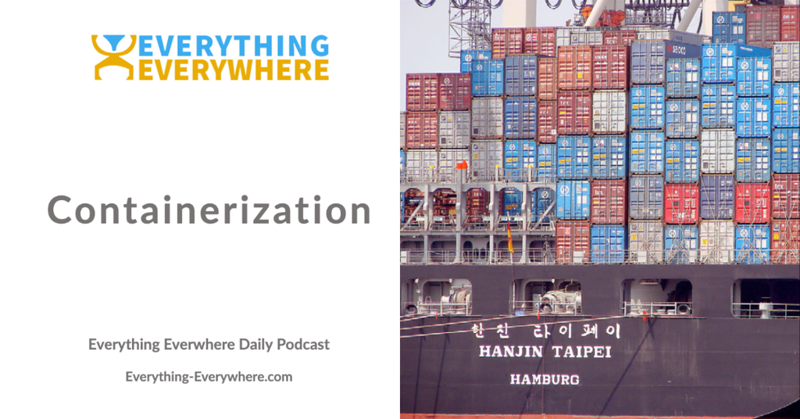 Sometimes the smallest things can make the biggest impact. There is no better example of this in the modern world than the Intermodal Container, aka the shipping container.

You’ve probably seen them on ships, trains, and trucks, and believe it or not, these rectangular metal boxes are responsible for the entire modern economy.

Learn more about shipping containers on this episode of Everything Everywhere Daily.

And, Scottevest solves the problem that so many women face with not having pockets in their clothes. All Scottevest clothes and jackets have ample pockets for both men and women. Best of all, the pockets are so well integrated into the clothes than most people won’t even know you are carrying anything.

For thousands of years, humans shipped goods by sea. For that entire time, while ships improved and got larger, the process of loading, storing, and transporting goods never really changed.

Romans would ship wine or olive oil in clay containers known as amphorae. These were usually longish containers with a pointy end, and they usually couldn’t stand on their own. When they find Roman shipwrecks today, the one thing they usually find in mass are amphorae.

Each one of these had to be loaded and unloaded onto a ship one at a time. This was known as break bulk shipping.

Other items such as ceramics, or metals might be packed in crates, but they too had to be handled one at a time.

The result was that a ship would often spend more time in port than they did at sea because loading and unloading a ship was so labor-intensive and inefficient.

Even well into the 20th Century, it still took days or even weeks to load or unload a ship with break bulk cargo. That was because everything was in a separate crate, box, barrel, or bundle.

You had to haul everything out individually, usually with a team of hundreds of people, put it in a warehouse, before it was then put on trucks or trains individually, and shipped off.

Even the use of pallets and cranes to help load and unload didn’t really make the process super-efficient.

There were moves towards containerization throughout the early 20th century.

Most of the containers were built on a company by company basis. There was no consistency between companies, and often within companies. The containers would often be made out of wood or other cheap metal, and sometimes didn’t even have a top. They would often more like bins than containers.

The first real advance towards a standard, modular system for shipping occurred in 1947 just after Word War II by the American Transportation Corps. They created something called a “transporter” which was a metal box used by the military.

They expanded this in 1952 with the creation of the CONtainer EXpress, or ConEx box system. At first glance, the ConEx box looks very similar to modern shipping containers. They were modular, could be stacked, and they were sealed.

However, the real advance, and the creation of the system we have today, came in 1955 from the owner of an American trucking company named Malcolm McLean.

McLean had no knowledge of the shipping industry. He was a truck guy.  1955 was before the Interstate Highway system was built and he was concerned that increased traffic was going to make it difficult for him to transport goods via roads. His company mostly transported goods along the east coast.

He thought that most of the long haul portion of a route could be done by ship, with just the last section handled by truck. He envisioned putting the trailer of a truck on to the ship, and then sailing with the trailer, and then offloading the trailer again where another truck would take it to the final destination.

He also realized it would be much easier and more efficient if he could separate the box part of a truck trailer from the wheels.

On 26 April 1956, McLean’s converted a World War II tanker, the Ideal X, loaded it with 58 metal containers, and shipped them from Newark to Houston. It was the first use of what we would call today’s shipping containers.

The size of the containers he used was determined by the laws in the State of New Jersey for tractor-trailers. The original containers were 8 feet, by 8 feet six inches tall, by 35 feet long.

Two years later, another company, Matson, made their own shipping container, except these were 24 feet long.

In 1968, McLean won a contract with the US Military to ship goods to Vietnam via shipping containers. In the contract, the military paid for the round trip of the ships, however, the goods only went to Vietnam. On the return trip, all of the containers were empty.

McLean found an eager buyer for his ships and containers going back to the United States in Japan, which at the time was just starting to expand its manufacturing industry. This cheap shipping to the United States was a huge reason for the increase in Japanese exports and the growth of their economy.

We were moving in the right direction, but we still needed to nail down a standard. Between 1969 and 1970, the International Maritime Organization published standards for shipping containers, so there would be standard sizes for containers, which meant that ships and port facilities could be built for standard units.

The patents held by Malcolm McLean were released made royalty-free so his system could become a global standard.

The vast majority of shipping containers conformed to these standards. They are 8 feet wide, by 8.5 feet high, with a length of either 20 or 40 feet.  Although, today many containers are now 9.5 feet high.

They are made of corrugated steel, with locking casting on each of the eight corners. These castings allow the containers to be stacked and locked to each other, or locked to the bed of a train or a truck.

One of the biggest challenges of early shipping containers were unions. Break bulk shipping was very labor-intensive. Container shipping needs far fewer people to handle far more cargo. They renegotiate contracts with most of the dockworkers in the United States and that included negotiating pay increases to compensate for the fact that locked containers couldn’t be pilfered, which was considered part of the compensation package for many dock workers.

Over 90% of all manufactured goods in the world are transported at some point in a shipping container.

The time it takes to process the largest container ships is now about 24 hours, which is far less time than it took to unload far smaller ships 60 years ago.

Other advancements in shipping containers include refrigerated containers that allow for produce and foodstuffs to be shipped cheaply.

As more and more containers were built, people began finding more use for them. In the 1980s, the first buildings were made out of shipping containers, and this is something you can now find in many cities around the world. There are companies now offering premade offices which are the same dimensions as a shipping container, allowing these buildings to be sent onsite almost anywhere in the world.

Las Vegas has a container park with restaurants, bars, and stores which are all located in shipping containers.

So where does container shipping go from here?

There is actually a lot of innovation still ongoing in container shipping.

One company has developed a foldable shipping container so it doesn’t take up as much space when it is not being used, and you can return more empty containers on ships in fewer trips.

Ships keep getting larger, and they also have smaller and smaller crews. One goal is to eventually have ships that are automated and can sail from port to port without any crew or a very small skeleton staff.

Likewise, ports are becoming more and more automated as well. A fully automated port is not far off and many aspects of port processing are already automated.

Improved customs processing would also be a huge improvement, and it is estimated that streaming lining customs and developing global standards could facilitate trade as much as another round of global trade negotiations would.

It is hard to state just how important shipping containers are to the modern world economy.

Malcolm McLean was named the Man of the Century by the International Maritime Hall of Fame. When he passed away in 2001, obituaries said he was as important as Robert Fulton, inventor of the steamboat, was to international shipping.

Former US Transportation Secretary Norman gave this eulogy to McLean,

Malcom revolutionized the maritime industry in the 20th century. His idea for modernizing the loading and unloading of ships, which was previously conducted in much the same way the ancient Phoenicians did 3,000 years ago, has resulted in much safer and less-expensive transport of goods, faster delivery, and better service. We owe so much to a man of vision, “the father of containerization,” Malcolm P. McLean.