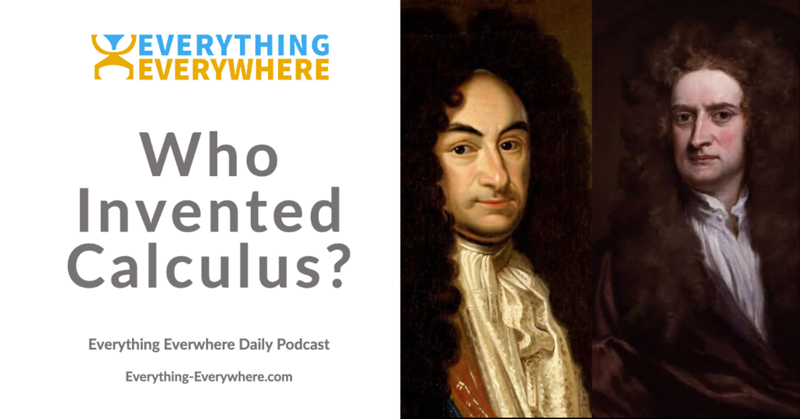 For the last 300 years, a debate has raged between mathematicians about who should be credited with the invention of calculus: Sir Isaac Newton or Gottfried Wilhelm Leibniz.

The sides of the debate have mostly been based on geography with English mathematicians advocating for Newton, and Continental Europeans siding with Leibniz.

Learn more about the war over calculus, even if you’ve never taken a calculus course in your life, on this episode of Everything Everywhere Daily.

If you want to understand calculus at a layman’s level, the audiobook I would recommend is Infinite Powers: How Calculus Reveals the Secrets of the Universe by Steven Strogatz.

Though many of us were scared away from this essential, engrossing subject in high school and college, Steven Strogatz’s brilliantly creative, down-to-earth history shows that calculus is not about complexity; it’s about simplicity. It harnesses an unreal number – infinity – to tackle real-world problems.

For those of you who may not have taken a calculus course, fear not. I’m not going to be getting into the weeds of equations, and given that this is an audio show, it would be hard to do anyhow.

It does this by harnessing the power of infinity. For example, if you wanted to find the shape of an irregular object, you could add up an infinite number of squares.

It was figuring out how to make a system that allowed for the use of infinity, which is the real trick behind calculus.

Calculus is the reason behind modern engineering and science. Everything and I do mean literally everything, from computers to buildings, to cars, is dependent on calculus.

Figuring this out was no small accomplishment and if attribution in mathematics and science means anything, it would mean something in giving attribution in calculus.

We’ll start with the case for Isaac Newton.

Newton was a really smart guy. In fact, he single-handedly probably did more for the advancement of science than any other person in history. He figured out the laws of motion, gravity, and light. Any one of those things would put him into the pantheon of science greats, let alone figuring out all three.

And on top of that, we are talking about him discovering one of the most important entire branches of mathematics.

Newton’s work began when he was 23 years old and working on the problems of physics. In order to solve the problems he was working on, he had to develop a new system of mathematics to go with it.

The system he invented he called “fluxions”.

In 1671 he wrote a book called a “Method of Fluxions” which described his new system.

The problem was that Newton never published his work. Other than himself and a few of his colleagues, no one knew about the system he had developed.

Had Newton published his work and made it public, this entire controversy would never have erupted.

In 1674, Leibnitz began working on his system of calculus. 10 years later, in 1684 he published his system in a paper called  “Nova Methodus pro Maximis et Minimis” or “A New Method of Maximums and Minimums”.

Newton later did publish his work fully, in 1704 as an appendix to his book on optics.

Newton and his supporters in England were adamant that Leibnitz plagiarized calculus from Newton.

Their argument starts with a trip that Leibnitz took to England in 1673, the year before he began work on calculus.

He didn’t meet with Newton during his trip, but he did spend time with two of Newton’s associates in the Royal Academy, Henry Oldenburg and John Collins, and during the trip he might have learned second hand about what Newton was doing.

After his trip to England he kept up a correspondence with Oldenburg Collins where they discussed mathematics.

He then had a similar controversy when he came up with a solution to a problem with infinite series which had already been published, which added fuel to the case of him being a plagiarist.

Before 1677, Leibnitz never mentioned anything about calculus to anyone. A year before in 1676, he supposedly received a package of letters which included a 1672 letter from Newton to Collins which explained his fluxion calculus.  So, according to the Newton supporters, he had a full year to study Newton’s system and claim it has his own.

All of this seems pretty damning.

So what about the defense for Leibnitz?

Most of the accusations towards Leibnitz are circumstantial. Yes, he was in England twice and met with mathematicians, but there is no evidence he really learned anything or spoke with anyone who would be in the know about Newton’s calculus. Also, on his first trip he was quite young and hadn’t even started a serious study of mathematics.

There really isn’t a smoking gun.

The letters which Leibnitz received from his colleagues in England which did mention parts calculus were mostly overviews and didn’t go into any detail.

Moreover, the system which Leibnitz developed was different from Newton. Yes, the core of it was the same, but the system of notation he developed was far easier to use than Newton’s and it became the basis of the calculus we use today.

Researchers haven’t really found any evidence to prove, or even insinuate, that Leibnitz stole the idea from Newton.

If this were to be brought to a court of law, there might be enough suspicion to bring a case, but there wouldn’t be enough evidence to convict.

So, it can be documented that Newton definitely figured out his system first, but he never told the world about it or published it. Leibnitz discovered his system later, but he definitely published it whereas Newton didn’t, and there is no evidence to prove that he took the idea from Newton. If someone were to prove that he did, he improved on the Newtonian calculus to create a system that we use today.

The consensus today is that the two developed calculus independently.

Most of the written works from antiquity have been lost to history. Fires like the library of Alexandria, and other events over time have resulted in the vast majority of works from the distant past to be lost.

Every once in a great while, such a document is rediscovered. Such a document was discovered several years ago. It was erased from the pages of an ancient Byzantine manuscript to reuse the parchment for a prayer book, but with modern techniques, it was possible to read the test.

The book is called the Archimedes Palimpsest, and it contains one of the lost works of one of the few people who could rival Newton for the title of greatest mathematician/scientists in history: Archimedes.

In this, there is a section titled “The Method of Mechanical Theorems” where Archimedes describes how to calculate the area of curved shapes by using a technique which closely resembles what we now call integral calculus. He figured out how to calculate areas using an infinite number of small triangles.

The technique was very limited with what it could do, it wasn’t a fully developed system of calculus, and he hadn’t discovered a system for doing differentiation. That being said, Archimedes laid the foundation one thousand eight hundred years before Newton or Leibnitz.

If the work hadn’t been lost for centuries, calculus and all the science which stems from it could have been discovered hundreds of years earlier.