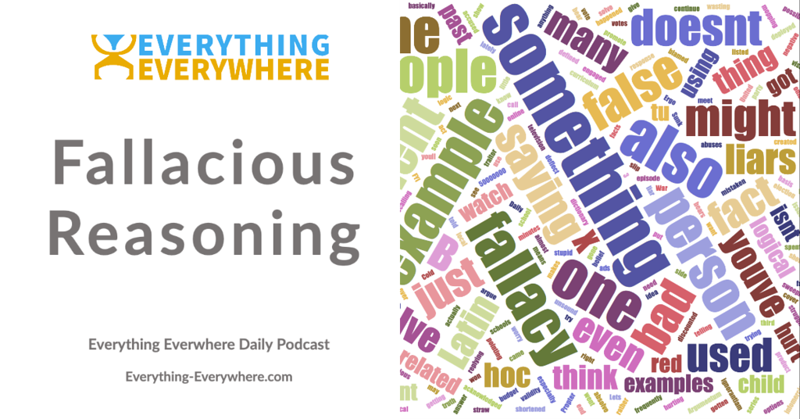 We are often told that schools are where you learn how to think, not what to think. Sadly, almost no school curriculum deals directly with logic and the closely related subject of logical fallacies.

Fallacies are all around us. Just read something online or watch a few minutes of television and you’ll probably encounter examples of people using fallacious reasoning and logical fallacies. In fact, you’ve probably engaged in it yourself. We’re all guilty of it.

Learn more about some of the common logical fallacies on this episode of Everything Everywhere Daily.

If you are looking to learn how to think more logically, the audiobook I would recommend is Mastering Logical Fallacies: The Definitive Guide to Flawless Rhetoric and Bulletproof Logic by: Michael Withey and Henry Zhang.

I know that the argumentation and logic classes I took in college were some of the most useful classes I ever took, and learning even the basics could do wonders for anyone.

The dictionary defines a fallacy as “a mistaken belief, especially one based on unsound argument.” There are actually dozens of acknowledged fallacies, and once you know what they are you see them everywhere.

Here is a list of well-known fallacies and some examples of what to watch out for. FYI, many of these are known by their Latin names.

Ad hominem is Latin for “to the man”. In a nutshell, it is saying something about the person making the argument, not the argument itself.

This happens all the time and it is probably the most common fallacy which most people slip into.

This could be as simple as name-calling or pointing out facts about the person making an argument, not the argument itself.

For example if someone were to call someone dumb, crazy, stupid, a liar, a traitor, or any number of other insults, they would be engaging in Ad hominem attacks.

There are several variants of this, including our next fallacy:

From the Latin for “you too”, tu quoque is also known as an appeal to hypocrisy.

For example, someone could say that you shouldn’t eat junk food. In response to that,  you could say that the person making the claim is overweight and therefore what they are saying should be discounted.

The person might be overweight, but it doesn’t mean that their weight makes their argument wrong. Junk food can still be bad for you, even if the person who says it is overweight.

This is a closely related fallacy where you bring up another subject to deflect criticism. The problem with whataboutism is that it doesn’t really answer the claim being made.

A common use of this will be when politician A from one side is accused of something, and their defenders will say “what about politician B who did the same thing?”

This was a common tactic of the Soviet Union during the Cold War who would bring up problems with the United States whenever they were confronted with rights abuses in their country.

This is Latin for “after this, therefore because of this”. It is often shortened to just “post hoc”.

Just because something happened doesn’t mean that the election of someone had anything to do with it.

This has recently been used with people trying to link the adoption of 5G wireless networks with COVID-19. The argument is that because COVID-19 appeared soon after 5G networks were being deployed, that one caused the other.

Likewise, Homer Simpson created a bear patrol and used its existence to justify the lack of bears.

A hasty generalization is using insufficient data to make a much larger sweeping claim. It is the illogical basis for stereotyping.

An example of this would be saying that aliens are real because no one has ever shown that aliens haven’t visited Earth.

Of course, you can’t prove a negative in this case.  It would only take one example to show that aliens have visited Earth, but there are no number of counterexamples that could possibly prove it false.

This is basically creating a false representation of an opposition position so you can argue against that.

I’ve been seeing this all the time in political ads lately where one candidate will attack a caricature of another candidate’s position, rather than their position itself.

They will say that their opposition wants to hurt the economy or hurt the country, which is just a strawman. No one runs on a platform of hurting the economy, yet many political campaign commercials will act as if that was the platform.

This is also often used on infomercials where they portray someone struggling to do something simple like mopping or chopping an onion, and their product will solve the problem which most people don’t really have.

This fallacy creates a false distinction of there being only two options, or that not supporting one position implies that you must support another position.

The common phrase, “either you are with us or against us”, presents a fallacy of a false dichotomy.

This is also known as throwing good money after bad. People will advocate spending more money on something based on how much money they have previously spent on it.

Many projects which have gone over budget will justify spending more money on it because of how much money has already been invested.

In reality, past investment has little to do with the rationale behind future investments. Most decisions which take into consideration past investments are based on emotion, because the person or group making the decisions may have made the previous decision and don’t want to be proven wrong.

You might engage in this when you’ve decided to finish a book because you’ve gotten halfway through it or if you continue watching a TV series because of the time you’ve invested.

A red herring argument is similar to a straw man. It is bringing up a subject totally unrelated to the issue at hand to draw attention away.

Let’s say you got a ticket for speeding and when your spouse asked you about it, you try to change the subject to some tragedy on the news. Another example would be bringing up a subject and then asking “how can someone worry about that when there is some other larger problem in the world.” The fact that there are larger problems, doesn’t mean that something else isn’t also a problem.

Also known as begging the question, this is making a premise that assumes the truth of the conclusion.

Likewise, “voting for a third party is wasting your vote because they can’t win.” Well, the reason they can’t win is that no one votes for them.

This fallacy assumes that because someone said something, it is therefore true.

Someone who is an expert in their field could still be wrong, or they might not have any relevance in the field in which they are being cited.

An example would be a famous actor being used to promote a smartphone. Being an actor has nothing to do with being an expert on smartphones.

Likewise, a Nobel Laureate like Linus Pauling made a lot of claims about vitamin C, and many people believe it because he won a noble prize, even though that had nothing to do with vitamin C.

Finally, I’ll end with the

This is assuming that something is true because it is popular. This is seen often in advertising when the number of customers is given as a selling point. As one famous album cover put it, “50,000,000 Elvis fans can’t be wrong.” Well….actually, they can.

McDonald’s also used to advertise the number of hamburgers they’ve sold on their signs,

There is also an anti-bandwagon fallacy which says that you shouldn’t do something or that something is bad because everyone else is doing it. This would be like saying a band isn’t any good anymore once they’ve become popular.

There are many more fallacies out there, some of which are only subtle differences from the ones I’ve listed here. However, this list should give you a good starting point for what to look out for when you hear anyone make a claim.