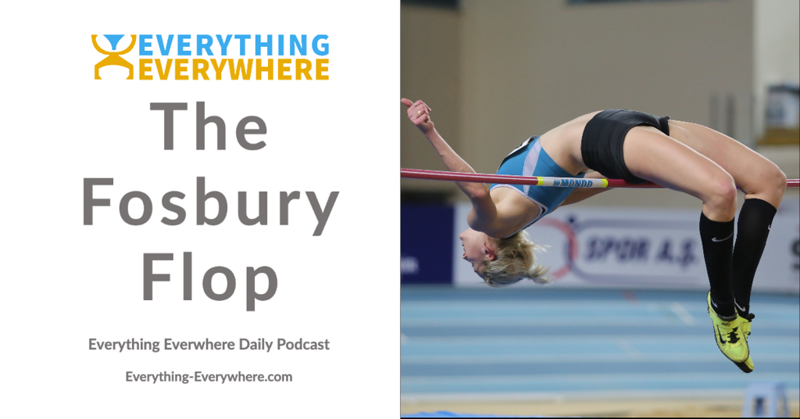 At the 1968 Olympics in Mexico City, Dick Fosbury won the Gold Medal in the men’s high jump.

He did it by jumping an Olympic record 2.24 meters or 7 feet, four inches.

What was remarkable about his accomplishment wasn’t the height he jumped, but how it did it.

He didn’t just win a gold medal, he revolutionized the sport of high jumping.

Learn more about the Fosbury Flop on this episode of Everything Everywhere Daily.

This episode is brought to you by CuriosityStream.

This podcast gives you a wide array of subjects and things to learn about every day. However, sometimes you might want to go more in-depth on a subject than what you might get on a daily podcast.

CuriosityStream has over 2,500 documentaries about a wide variety of subjects, including shows like The Olympic Games: A Mirror To Society.

High jumping is a very simple sport. There is a bar and you must jump over it without knocking the bar down. That’s it.

For something so simple, it is surprising that there has been so much innovation. Over time there have been several styles and techniques used in the high jump. The scissors jump, the straddle jump, the Western Roll, and the Eastern cut-off were all different variations of how competitors managed to leap over the bar.

Most of them were like a glorified leap or hurdle over the bar. If you go and watch a youtube video showing any previously mentioned techniques, it probably looks very different from how you may have seen people do the high jump.

That is because the way almost every single high jumper in the world jumps today was influenced by Dick Fosbury and the technique he developed: The Fosbury Flop.

Dick Fosbury began high jumping in high school in Medford, Oregon. As a 16-year-old he began experimenting with new techniques to compete in the high jump because he was having difficulty with the current popular technique, the straddle jump. With this jump, you would have your body face down and kick your legs over the bar sequentially.

Fosbury just couldn’t do it and couldn’t even meet the qualifying level of 5 feet, or 1.5 meters, at his high school track meets. He went back to the scissor jump which was considered outdated.

Then at one meet, he had a breakthrough. He lowered his shoulders and lifted his hips, and managed to get a personal best of 6 feet.

Fosbury kept doing his unique style of high jump and improving the technique. He had to figure out everything himself. As he noted in an interview:

“Quite honestly, there was no model, nothing similar to what I was doing, they really didn’t have anything to help guide me, only to encourage me.”

His early attempts were described as an “airborne seizure”.

The name Fosbury Flop came from a local newspaper that ran a photo of him with the caption “Fosbury Flops Over Bar,” and in a corresponding article, the writer said he looked like “a fish flopping in a boat”.

By his senior year, he had changed the technique to going over the bar backward, head first, and curling his feet over the bar.

He was able to do this because this was also the same time that they switched the high jump landing area to foam rubber. The foam allowed him to land on his back. Prior to this, almost all high jumpers landed on their feet as there was only a pile of sand in the landing area.

It looked weird, but it worked. As a senior, he set his school record, took second at the state tournament, and later won a national tournament in Houston.

After graduation, he attended Oregon State University where his coach tried to get him to jump like everyone else.

The debate on how he should jump ended his sophomore year when he crushed the school record by jumping 6 feet 10 inches or 2.08 meters. His technique had clearly proven itself and his coach agreed to go all in.

They began filming him jumping this way to analyze and improve his technique.

Other people began taking notice too.

In 1968 he made the cover of Track and Field News, won the NCAA championship, and won the US Olympic Trials….all using his crazy jumping technique.

Even though he won the Olympic trials in Los Angeles, the US Olympic Committee wasn’t sure that results at sea level would be the same as results at altitude in Mexico City, so they had a second trial in Lake Tahoe where Fosbury qualified again.

During the Olympics, Fosbury cemented his reputation for doing things differently. He skipped the opening ceremony so he could go and see the pyramids outside of Mexico City, and slept in a van that night.

At the Olympics, he coasted to a gold medal making every single jump up until he had the gold medal clinched and he tried for the world record which he didn’t get. He had to settle for the Olympic and American records.

Fosbury’s success was unique because it didn’t come from enormous strength or speed. Witness Bob Beamon’s incredible performance at the 1968 Olympics which I went over back in episode 31.

Fosbury found success because he dared to do something different and to break the sport’s established norms.

After he won gold, the crazy technique was no longer so crazy and everyone starting doing it. Just four years later at the 1972 Olympics in Munich, 28 of the 40 competitors were using the Fosbury Flop. 1976 marked the last time anyone won an Olympic medal using a technique other than the Fosbury Flop. Every single medalist in the high jump in 46 years has followed in the footsteps of Dick Fosbury.

So what is so special about going over the bar backward? Well, it turns out that Fosbury got his degree in engineering and while they were analyzing his technique in college, they figured out the secret.

Every other style of jumping required putting your whole body over the bar at the same time. In physics terms, they had to put their center of mass above the bar.

Fosbury won the NCAA championship again in 1969 but never competed in the high jump again. He set up an engineering company in Idaho in 1977 and attempted unsuccessfully to run for congress in 2014. Today he is the county commissioner for Blaine County, Idaho.

His name, however, lives on every time a high jumper anywhere in the world flops over a bar backward.