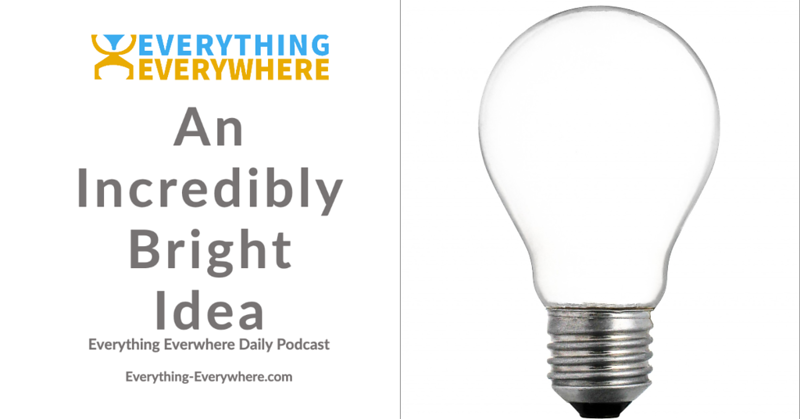 Thomas Edison is often credited with the invention of the light bulb.

Yet, nothing could be further from the truth. If there is any modern invention that really can’t be attributed to a single person, it would be the incandescent lightbulb.

Learn about the history behind the incandescent light bulb, perhaps the most significant invention of the 19th century, on this episode of Everything Everywhere Daily.

This episode is sponsored by CuriositySteam.

CuriosityStream is like health food for television. They have over 2,500 educational programs available for streaming on almost any device, on an incredibly wide variety of subjects, including biographies of Thomas Edison.

I’ve been a Curiosity Stream subscriber since the service was first launched in 2015 and I watch it several times a week.

If you are a curious person and let’s face it, if you are listening to this podcast you are, then to start your subscription visit Everything-Everywhere.com/CuriosityStream or click on the link in the show notes.

Mirriam-Webster defines incandescence as the “emission by a hot body of radiation that makes it visible”.

In that sense, incandescence has been around since we invented fire. The first time we heated something and it glowed, we had started down that path which would take us to the incandescent light bulb.

If you have ever hooked up a wire between the ends of a battery, you will have noticed that the wire got hot and the wire started to glow. The idea of artificial electric light was probably the very first thing people thought of when they started to experiment with electricity.

The first documented case of using electricity to heat a wire to incandescence to create light was by Ebenezer Kinnersley in 1761, which was well over a century before electrical light was available commercially.

The reason why it took so long and so many people took a stab at incandescent light was that when things heat up they tend to burn. If you make something hot enough to produce white light, it is probably going to burn quickly. This is the reason why we say a light bulb “burned out”. The filament in the bulb literally burned.

The first person to put together something which we might recognize as an incandescent lightbulb was British scientist Warren de la Rue in 1840. He put together two ideas which, while they weren’t the ultimate answer, were big steps in solving the problem.

First, he picked platinum as a filament because it had a very high melting temperature. That meant he could reach very high temperatures while retaining the integrity of the filament, which would mean more and better light.

Second, he put the filament inside of a vacuum tube. With less air to interact with, the filament wouldn’t burn because there was no oxygen. A vacuum was the original reason why light bulbs are bulb shaped. They were originally designed to hold a vacuum.

Platinum was a good idea, but totally impractical given the costs involved.

The idea of a curled filament in a vacuum tube was a good idea, however, and people built off of that.

The next big innovation was the use of carbon filaments. Carbon is obviously much cheaper than platinum and it technically has an even higher melting point.

American John Starr received a patent for a carbon filament lamp, but it was never put into production or made practicable.

…and this was the problem. Many inventors had come up with electrical lights but no one could make something which was practical and affordable.

So the invention of the light bulb really wasn’t so much discovering the idea of incandescent light from an electrically heated filament. That idea had been around for a long time. The challenge was making something that worked well and could be deployed.

This is sort of like the iPhone. It wasn’t the first smartphone, but it was the first to really provide a coherent experience that was easy to use.

Here is where we bring in the two main characters in the story.

Joseph Swan was working in England, he began working on incandescent lighting starting in 1850 and returned to the project on and off over the next several decades as equipment improved. In the 1870s, his work went into high gear.

He showed off a light to a crowd of 700 people in 1879 which could last 40 hours, which was a really long time for a light bulb at this time. The bulb had a high vacuum, a carbon filament, and platinum lead wires to the filament to handle the high current which was required.

Between 1879 and 1881 he lit the first homes, theaters, businesses, and streets with electrical incandescent light in London.

At this same time over in the United States, Thomas Edison and his laboratory began working hard on the problem of incandescent lighting and began filing patents. The patents covered everything from creating shaped carbon filaments to the wire supports for filaments.

The problem was, there were a lot of patents floating around for a lot of similar ideas. There was as much or more litigation and buying patents at this time than there was actual innovation in electrical lighting.

In 1883 the US Patent Office invalidated many of Edison’s patents, which led to years of lawsuits and eventually granted him a patent on carbon filaments in 1889.

Edison eventually began buying up patents and had to merge with Joseph Swan’s company in Britain to avoid conflicting patent claims. They created the Edison and Swan United Electric Company, which eventually became known as Ediswan.

By the turn of the century, electrical lighting was a thing, but it wasn’t universal yet, and there were still some major problems. The standard bulb at this time was a carbon based filament in a vacuum enclosed by a glass bulb. The average bulb had a life expectancy of about 40 hours, which was far too short unless you had a use which could generate a lot of revenue.

One thing which people continued to work on was the creation of a metal filament. Both tantalum and osmium were developed, but they proved to be too expensive.

Finally, in 1904 Hungarian inventor Sándor Just and Croatian inventor Franjo Hanaman were awarded a patent for a tungsten filament light bulb. Tungsten made a much brighter light and lasted much longer.

It was Tungsten which became the basis of almost all in incandescent light bulbs going forward.

The other big innovation was getting rid of the vacuum. Vacuums are hard to make and hard to hold. Even a slight weakening of the seal can cause air to seep in and for the filament to burn out.

The biggest innovation here came with filling the bulb with an inert gas. Inert gases such as krypton and xenon allow for brighter bulbs, and reduced blackening which is when the inside of a bulb it’s coated with a black residue, which reduces light.

Once the basics of the incandescent light bulb were established, there was a steady stream of small improvements to the bulb over a period of decades which improved efficiency and lowered costs.

However, no matter what was done, there was still one major problem that could never be overcome because it dealt with incandescence itself: heat.

As I mentioned before, the process of incandescence involves making a heated object glow to produce light. About 95% of the energy which goes into an incandescent bulb ends up turning into heat. This is great if you have an Easy Bake Oven or a lava lamp, both of which depend on the heat of a light bulb, but not great for anything else.

This is why fluorescent bulbs and LED bulbs were created. They can create more light with less heat, and hence save energy. The creation of LED’s is a fascinating story in itself, but that will have to be for another episode.

So, why is Thomas Edison so often credited with the invention of the light bulb? Mostly because his name was on the early bulbs. While Edison didn’t invent the light bulb per se, his lab did do a significant amount of research, and more importantly, his company Edison Electric had the most money, which meant they were able to manufacture and distribute electrical lighting.

One of the funny things is that the symbol for inspiration or a sudden idea is a light bulb which appears over someone’s head, yet the development light bulb was the exact opposite that.

That shows why Edison said genius was 1 inspiration and 99 perspiration.

The executive producer of Everything Everywhere Daily is James Makala.

I want to give a big shout out to the listeners in Italy, Belgium, Poland, Ecuador, and Malta for putting the show in the Apple Podcast charts in those countries. I’ve been to all of your countries, in some cases multiple times, and I’m hoping that we can see the show on the charts in more countries soon.