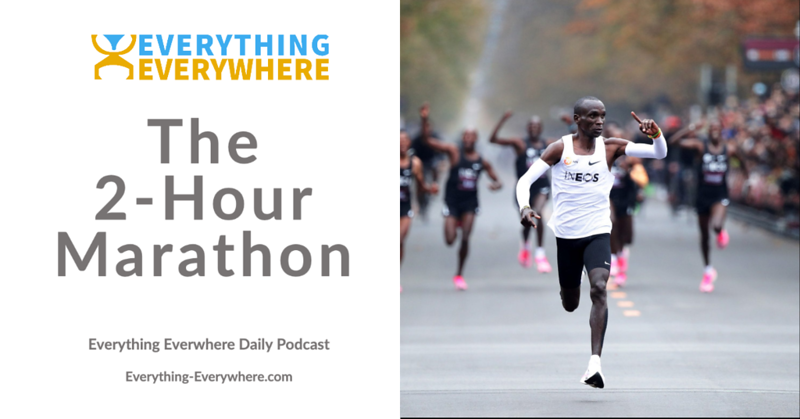 Eliud Kipchoge is unquestionably the greatest marathon runner in history. He’s won an Olympic Gold Medal, holds the world’s record, and has won 12 of the 13 marathons he has ever entered.

However, there was one accomplishment that had been out of reach for Kipchoge and every other marathoner: The 2-hour marathon.

On October 12, 2019, Kipchoge managed to break that barrier under some very special circumstances.

Learn more about when behind the breaking of the 2-hour marathon on this episode of Everything Everywhere Daily.

This episode is sponsored by Curiosity Steam.

Guess what my favorite online streaming service is? It isn’t Netflix, Hulu, or HBO. Its Curiosity Stream.

I’ve been a Curiosity Stream subscriber since the service was first launched in 2015 by the founder of the Discovery Channel. Curiosity Stream is dedicated to quality documentaries and original programming about almost any subject you can think of.

If you are a curious person and let’s face it, if you are listing to this podcast you are, then to start your subscription visit Everything-Everywhere.com/CuriosityStream or click on the link in the show notes.

Likewise, the 10-second 100m dash was a barrier that took decades to break until American Jim Hines did it in 1968. It still remains the level at which someone is considered a world-class sprinter.

One of the last great time barriers was the 2-hour marathon. The world-record time in the marathon has dropped considerably over the last 100 years and it is one of the few events which has seen considerable world record progression in the last 20 years. In most track and field events, there has been a serious lack of advancement in world records.

In 2014, Kenya’s Dennis Kimetto set a new world record at the Berlin Marathon at 2 hours, 2 minutes and 57 seconds.

Four years later, at the 2018 Berlin Marathon, Eliud Kipchoge CRUSHED the world record when he put in a time of 2 hours, 1 minute, and 39 seconds, taking a full minute and 18 seconds off the record.

Perhaps even more importantly, the 2-hour barrier was looking to be in striking distance.

Physiologists had published papers on what the fastest theoretical time could be in the marathon, and most agreed that a two-hour marathon was well within the range of possibility.

Many companies and fans of running had a great deal of interest to see if this could be done.

Here I should explain the difference between a world record time and a world best. The sanctioning body for track and field is World Athletics, formerly the IAAF, the International Amateur Athletic Federation. They set the rules for the sport and keep the records.

For something to be considered a world record to them, it had to have occurred in a competitive race under conditions that meet their rules. This would include most major world marathons, the Olympics, and track meets.

This is very different than the Guinness Book of World Records, which doesn’t really care about rules and competitive races. They just want to know if someone was able to run a distance in a particular time.  This is considered a world best.

They recruited three world-class marathon runners for the attempt: Eliud Kipchoge from Kenya, Lelisa Desisa from Ethiopia, and Zersenay Tadese from Eritrea.

The event took place on May 6, 2017, on an automobile race track outside of Milan. For the attempt, they had a pace car that projected a green laser onto the ground for the runners, a big clock on the back of the car, and runners who would draft for them to reduce wind resistance.

They also had the runners wear their new, ultra engineered Nike “Vapor Fly Elite” shoe, which was supposed to be the best long-distance running shoe in the world.

The attempt didn’t quite work. Kipchoge finished in 2 hours, 25 seconds. The best time ever at that distance, but not quite under 2 hours.

The next attempt was in 2019. Ineos, a UK chemical company, sponsored the attempt called the Ineos 1:59 Challenge. This time, the only competitor would be Kipchoge.

The attempt was similar to what was attempted two years earlier in Milan, but with some changes.

There was again a pace car with a projected laser line behind it. This ensured there was no unnecessary acceleration and that Kipchoge was on time.

There were 41 pacesetters that swapped in and out. They would run in a V-shaped formation ahead of him to reduce drag. All of the pacesetters were accomplished long or middle-distance runners.

A track was set up in Vienna’s Prater Park. A full lap of the track was 4.3-kilometers or 2.7-miles. The track was surrounded by trees to minimize wind.

His shoe was a newer Nike Vaporfly Next% which was supposed to increase performance by 4%.

Hydration during the race was done by people on bicycles who delivered water to him instead of a normal hydration table.

The temperature at the start was a perfect 9 °C or 48 °F, which is exactly what you want for a heat-producing marathon runner. This was several degrees cooler than the 2017 attempt.

Finally, for this attempt, the public was allowed to attend whereas, in Milan, the course was closed. Eliud said he missed having spectators.

One hour, fifty-nine minutes, forty point two seconds, Eliud Klipchoge crossed the finish line becoming the first person ever to run the distance of a marathon in under 2-hours.

As noted above, this is not an official World Athletics record, but he was recognized by the Guinness Book of World Records as being the first person to ever run a marathon distance in less than 2-hours.

There is a lot about this attempt which cannot be replicated in an actual competition, but that wasn’t the point. The point was to show it could be done.

It is possible we might see this too with the marathon. Unfortunately, since Kipchoge’s run, most major marathons have been canceled due to COVID-19, so we will have to wait until 2021 to see if official records are broken.

Kipchoge’s average speed during the record attempt was 13.16mph or 21.18kmph. To put this into perspective, the next time you are at a gym with a treadmill, try running at this speed for ANY length of time. The vast majority of people listing to this will not be able to run at that speed for 1 minute, and most probably might not be able to for even 10 seconds.

Kipchoge ran the equivalent of a 17-second 100m dash…422 times in a row without resting. He would have won most high school 1600m races with his average speed.

Even though it wasn’t done under competitive conditions, Kipchoge’s accomplishment of running a 2-hour marathon has to go down as one of the greatest physical feats in human history.