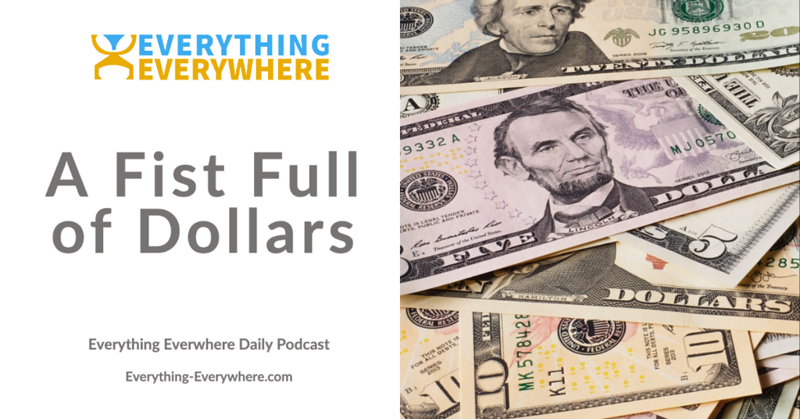 The currency in the United States is the dollar. You probably already knew that.

It is also the name of the currency in over 20 other countries including Canada, Australia, New Zealand, and Singapore.

What is a dollar exactly, and why is that the name of the currency in these countries?

Learn more about the history of the dollar on this episode of Everything Everywhere Daily.

This episode is brought to you by CuriosityStream.

If you want to brush up on your economics, CuriosityStream has a bunch of documentaries to choose from, including shows on the Dutch Tulip Bubble of 1636, and the Great Depression, and also biographies of famous economists such as Adam Smith, Karl Marx, and Milton Friedman.

The rise of money as a fungible means of exchange for goods and services was inexorably tied to the use of precious metals such as silver and gold.

These metals had properties which lent themselves to use as a currency, primarily that they were scarce, easy to divide, and were elements. You could melt silver, for example, to create smaller pieces, or melt them together to make larger ones.

Even though these metals were great as stores of wealth and units of exchange, they weren’t always the same. You could blend less expensive metals to create a coin which looked like a normal coin, but had less of the precious metal in it. Likewise, you could shave down a coin to make it slightly smaller, and take the shavings to make a new coin.

Hence, quality coins which had a guaranteed size and purity were more valued than other coins.

With that, we now turn to the Kingdom of Bohemia in the year 1520, where they began minting coins from silver which was mined in a silver mine in the town of Joachimsthal, today known as Jáchymov in the Czech Republic.  The name of the town is German coming from St. Joachim and “thal” which is German for valley.

The coins which were produced from this mine in Joachimsthal were called Joachimsthalers. Over time, the first part was dropped and they simply began being called thalers.

The thaler was a large silver coin about the size of an American silver dollar to use as a comparison.

As the coins spread, the term thaler became a generic term for a silver coin of that size, and the word morphed as coins spread.

Thaler became dalar in Scandinavia and dolar in England and the Netherlands.

As other countries began circulating silver coins, they were called dollars. The Netherlands issued a silver coin with a lion on it which became known as the lion dollar or the leeuwendaalder.  The first half of that, the lion part, became the basis of currencies in Romania and Bulgaria. The leu and the lev.

Likewise, a Spanish silver coins known as the pieces of eight, were of similar size to the thaler and became known as Spanish dollars.

At this point, you might be asking yourself why did the United States wind up with the word dollar for its currency, when it was a British colony? Wouldn’t it have made more sense for the Americans to use pounds?

Both the Dutch and Spanish dollars were circulated in the early Americas, especially the Spanish Dollar, as Spain produced an enormous amount of silver and had an outsized presence in the western hemisphere.

When the American Revolution happened, the colonies issued paper money which was backed with the silver from Spanish dollars. In Virginia, Spanish dollars were even legal currency used in everyday transactions.

In 1792, the first Secretary of the Treasury, Alexander Hamilton, evaluated the amount of silver found in the Spanish dollar coins which were circulating around the United States.

With this, they created a new United States dollar, based on the silver content of the Spanish dollar.  The US dollar had 371 4/16th grains or 24.057 grams or pure silver.

It was also determined that the accounts of the new United States would be in denomination of dollars.

That is how the United States adopted the term dollar for its currency. It is a German word which was adopted for Spanish coins, which were in use in the early colonies.

The definition of a dollar has changed over time. The amount of silver which makes up a dollar went down, and now it has no set value whatsoever. It is just a fiat currency.

So, if that explains the American use, why do other countries like the ones I listed in the introduction use dollars? Most of them were also British colonies at one point and they didn’t have Spanish coins floating around.

This has to do with decimalization. If you remember back to my earlier episode on why the US doesn’t use the metric system, the United States was actually a very early adopter to decimalized currencies.

The British pound used to be divided into shillings, which was 1/20 of a pound, and pence, which were 1/12 of a shilling. That means there were 20 shilling in a pound and 240 pence in a pound.

The US dollar was the second currency after the Russian Ruble to become decimalised, and in the 19th century the word dollar became associated with a decimalized currency.

When many Commonwealth countries moved to a decimalized currency they chose the name dollar to distinguish their currency from the previous pound.

Britain didn’t decimilize their currency until 1971.

The name of coins have similar histories tied to precious metals.

The word penny comes from the term pennyweight. A pennyweight is  ?1?240 of a troy pound, which is exactly the same as the ratio of a penny to a British pound. Both of them were units of weight of sterling silver.

The American use of the word penny derives from this, but it is not an official term. Officially it is simply a One-Cent coin. There is a huge debate about getting rid of the penny in the US, but I’ll save that for another episode.

The American and Canadian five-cent coin is known as a nickel due to the metal it is composed of. The nickel has been produced since 1866, and it replaced the silver half-dime coin. The US and Canada are the only countries which call five-cent coins “nickels”.

Speaking of dimes, the word dime comes from the French word of the same pronunciation, which means “tithe”, and a tithe of course is 1/10.

The United States and Canada have 25-cent coins, aka a quarter, whereas most of the rest of the world has 20-cent coins. The reason for this dates back to the Spanish dollars which circulated in the early United States. The coins would regularly be split into eight parts, hence them being called pieces of eight. Each eighth was called a “bit”, and 2 bits made up a quarter.

Countries like Australia which decimalized later just skipped the 25-cent coins as they had no history.

The United States is one of the only countries which still has a paper one-dollar note. This is one of those stubborn things like imperial units which just doesn’t seem to go away. The US has tried circulating dollar coins, but people just don’t seem to use them. You can actually find them in regular use if you go to countries which use the US dollar, like in Ecuador.

The problem with the dollar coins is that they were always too close in size to the quarter. The US Mint hasn’t produced dollar coins for general circulation since 2011 because of the lack of demand.

Finally I’ll end with the origin of the dollar sign.

The one lined variant was originally for the Spanish Peso. The large S indicated Spain, a P was used as a superscript. Eventually, the P and the S were written over each other, and then the round part of the P disappeared, leaving a vertical line through the letter S. The dollar sign is also the peso sign today in Mexico.

The double line variant might have been a monogram of the letters U and S superimposed on each other.

Today, the double line version has fallen out of use and it isn’t even available in the unicode character set on computers.

So in summary, the dollar today comes from a German word, popularized by Dutch and Spanish coins, and spread because of American decimalization.