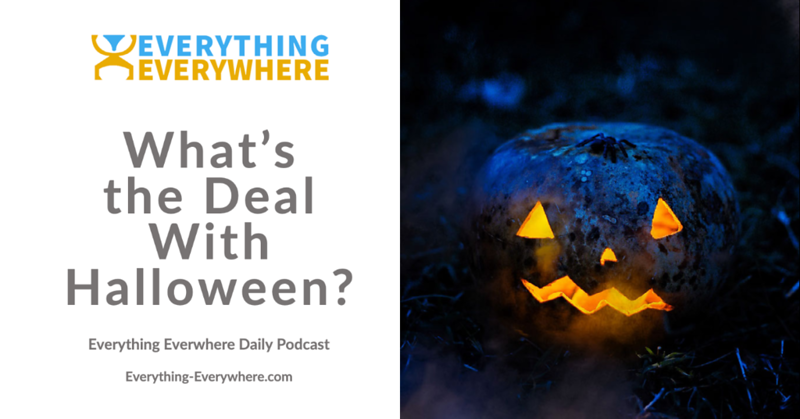 On October 31 every year, we celebrate Halloween. It is especially popular in the United States where we use the holiday as an excuse for kids to dress up and ask for candy, and for adults to dress up and drink.

But why do we dress up, and what’s the deal with pumpkins, how does this have anything to do with witches?

As with pretty much every holiday, the origins of Halloween have an ancient past.

The first thing to address in understanding the holiday would be the word Halloween itself.

November 1 is the Catholic holy day of All Saints Day, which as the name implies, honors all the saints. The older English term for the day was All Hallow’s Day or Hallowmas. The day after All Saints Day is All Souls Day.

Halloween basically means “saints evening” with the -een part coming from a truncated word in Scots for “evening”.

The collection of Hallow’s Eve, All Hallow’s Day, and All Souls Day were collectively known as Allhallowtide.

The first use of the word Halloween was from 1775.

Many of the traditions surrounding this holiday date back to the Celtic pagan festival of Samhain (pronounced “sow-win”). Samhain was celebrated on November 1 with, just like All Saints Day, celebrations starting the night before. Samhain was the end of the harvest season and the start of the winter and was the biggest celebration in the Celtic year.

As Christianity spread, the explicit pagan celebration went away, but the traditions and customs remained and were adapted to the Christian celebrations which occurred at the time time.

Many of the traditions of Halloween in England fell by the wayside as Guy Fawkes Day on November 5 became more popular. However, Halloween remained popular in Scotland and Ireland.

Very early colonists to the Americas brought the traditions of All Saints Day and Halloween with them. Anglican and Catholic settlers both celebrated the holiday, but the Puritans up in New England did not as they were generally against everything.

It was still a pretty minor holiday until the mass migration of Irish to the United States in the 19th Century. It was then that the holiday really took off and adopted many of the unique American attributes.

Because the topic of Halloween is so broad and has so many different traditions, let’s look at several of them individually to see where they came from.

Wearing Costumes and Trick or Treating

I’m lumping these two things together because they are so intertwined that it is hard to talk about them separately.

One of the features of the Samhain festival was the lighting of massive bonfires and also dressing up in the skins of animals. This is believed to be the earliest origins of the tradition of wearing costumes.

At least as early as the 16th century, the practice of mumming and guising was recorded. This was dressing up in costume and going door to door to ask for food.

Mumming was practiced all over Europe and for many other festivals including Shrove Tuesday, Epiphany Eve, and Christmas.

While this was a very early form of trick or treating, it was actually more like Christmas caroling, as the people in costumes would usually recite bible verses, sing hymns, or put on a very short play in exchange for food.

The dressing up as ghosts, ghouls, witches, and monsters ties into the All Saints Day and celebrations of the dead aspect of the holiday.

Costumes had a resurgence in the early 20th Century in the United States as Halloween transitioned from being a religious celebration to being a more secular community celebration.

The wide-scale trick or treating which many of us experienced in the US didn’t really get established until after WWII, when many soldiers coming back from the war established families, and the baby boom generation were children.

Radio and TV shows in the late 40s and early 50s showed trick-or-treating which popularized the activity around the country.

This also was part of a change in costumes from things pertaining to death, to pretty much anything. You could be a robot, an astronaut or a doctor, or whatever.

The phrase “trick or treat” harkens back to the 18th-century tradition of pulling pranks such as tipping over an outhouse, or throwing rotten eggs. In Ireland, the phrase which used to be used instead was “help the Halloween party”, which certainly sounds much less threatening.  Today, a trick might usually involve toilet papering someone’s house.

The tradition of dressing up in costumes and trick or treating has slowly spread outside of the US with its depiction in movies like ET. It has started to appear to a limited extent in other countries, often getting a great deal of resistance to the cultural import.

Not surprisingly, pumpkins come from the harvest festival part of the holiday. Pumpkins are native to North America and were an American contribution. As pumpkins are harvested around the same time as Halloween, it was a natural fit.

Carving pumpkins and putting lights in them probably come from Ireland. There is an atmospheric phenomenon known as will-o-the-wisp, where you can sometimes see a glowing light above bogs. It is the swamp gas that is often confused as UFO.

Another term for will-o-the-wisp was jack-o-lantern which was a reference to Stingy Jack, who was a fictional character who roamed the land with a carved-out turnip.

The use of carved pumpkins was popularized by the Washington Irving story The Legend of Sleepy Hollow”, where the Headless Horseman had a carved pumpkin in place of a head. The story is popular around Halloween due to its subject matter of ghosts and pumpkins, but the story itself doesn’t have anything to do with the holiday.

Because of its harvest connotations, pumpkins and jack-o-lanterns were used during Thanksgiving in the late 19th century.

By the way, the world’s record for the most lit jack-o-lanterns in a single display was set by the town of Keen, New Hampshire which had 30,581 lit at one time.

A quarter of all candy produced in the United States is sold around Halloween.

As I mentioned above, historically when people went door-to-door, they would ask for food. Candy was not that common.

As trick or treating became popular in the 40s and 50s, it also became more commercialized and candy manufacturers took it upon themselves to promote what kids really wanted: candy, not apples or popcorn balls.

I know as a little kid growing up in the 1970s, we took trick or treating VERY seriously. The holy grail was finding the house that gave out regular size candy bars, as opposed to the smaller “fun-sized” candy bars that everyone else gave out.

If I may quote the character Strongbad from the cartoon Homestar Runner,” what is fun about less candy?”

Every year there were always urban legends spread about houses that put needles or razor blades into the candy they gave away. However, there has never been an actual reported case of this, as it would be really easy to identify who did it. The only reported case of a child being poisoned by candy during Halloween occurred in 1974, and it was by their own parent.

At the height of the hysteria, there were actually hospitals that were offering to x-ray bags of candy.

Candy apples or caramel apples or toffee apples are a traditional treat that dates back to the early 20th century. It is believed to have been invented by American candy maker William W. Kolb, originally a treat for Christmas.

Neither of these things really has anything to do with harvest festivals or traditional All Saints Day festivities. They are rather modern adaptations of older beliefs which got linked with Halloween due to the holiday’s association with death and the occult.

While the idea of witches has always been around European culture, the association with Halloween probably came from the Salem witch trials and its unique American history.

The image of a witch flying on a broom actually dates back to the mid 15th century, where a Frenchman by the name of Guillaume Edelin confessed to flying around on a broom. There are illustrations of witches on brooms from the same time period.

The stereotypical image we have of witches wearing a pointy black hat actually comes from L. Frank Baum’s book the Wizard of Oz in 1900. The illustrations of witches in the book were the basis of the Wicked Witch of the West in the Wizard of Oz movie, which became the modern idea of a witch.

There are a few theories on why bats associated with Halloween. The first is that when Samhain bonfires were lit, it would often result in bats flying away from the fire. The other has to do with the old wife’s tale that if a bat is found in a house, it means someone is going to die, and that links up with the Halloween association with death.

Thankfully, the abomination of a food product is only seen around Halloween.

It dates back to the 1880s when George Renninger of the Wonderlee Candy Company created a product which was called “chicken feed”. The white, yellow, and orange pieces are designed to look like kernels of corn.

Originally the candy wasn’t associated with Halloween. It was penny candy that was available year-round. In the second half of the 20th century, other, better candy became more widely available and candy corn became relegated to Halloween because of its harvest connotations.

So, our modern Halloween celebrations are really a grab bag of ancient tradition and modern commercialism, with a mash up of a harvest festival, a pagan celebration, and a Christian holy day for the dead.  The only thing we need to do to really take the holiday to the next level is to get rid of candy corn.