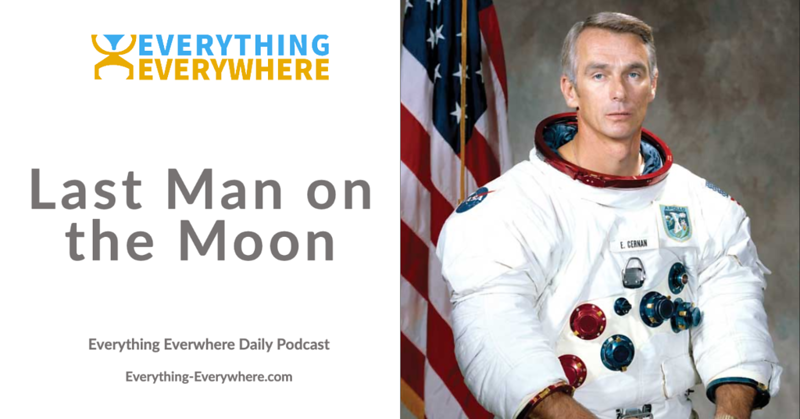 Everyone knows that Neil Armstrong was the first person to step foot on the moon. But who was the last person on the moon?

And why haven’t we ever sent anyone back to the moon?

Learn more about the last person to set foot on the moon and the past, present, and future of lunar exploration, or the lack thereof, on this episode of Everything Everywhere Daily.

If you love to follow the space program, then you need to get a subscription to CuriosityStream. They have tons of documentaries about all aspects of space flight, and they are doing original programming on current space missions. They have shows on the recent OSIRIS-REx Mission which gathered a sample from an asteroid, and from the recent flight of the SpaceX Dragon crew module.

Prices start at a low $2.99 per month or $19.99 per year. That is a whole year of programming for the cost of a month and a half on other streaming services.

Most things in life tend to reach their zenith near their conclusion.

The Apollo program reached its zenith right at the beginning. The moment Neil Armstrong stepped off the lunar lander, in most people’s minds, the Apollo program was complete. John Kennedy set a goal of sending someone to the moon, and Apollo 11 completed it.

However, the plan was for so much more.

In the initial planning stages for the Apollo program, NASA ordered 15 Saturn-V rockets, which would take them through Apollo 20.

Two of the Saturn-V’s were used in unmanned test flights for Apollo 4 and Apollo 6.

Three were used on manned test flights. Apollo 8 and 10 which flew into orbit around the moon, and Apollo 9 which took the first lunar module into Earth orbit.

That left 10 Saturn V rockets for 10 flights to the moon.

The plan was to launch missions about 4 months apart through 1972 which would take them through Apollo 20.

However, on January 4th, 1970, NASA announced the cancellation of Apollo 20 so their Saturn V could be used to launch Skylab, NASA’s first space station.

In Apri 1970, Apollo 13 launched and famously didn’t land on the moon. I’ll refer everyone to the Tom Hanks film of the same name to give you an overview of what happened on that mission.

After the Apollo 13 debacle, people simply lost interest in the moon and congress didn’t see the point in more Apollo mission. They won the space race and there wasn’t any interest in science or further exploration.

In September 1970, NASA announced the two more missions were going to be cut. Apollo 18 and 19 were canceled and the rest of the missions had to be rescheduled and renumbered.

Apollo 14 was already set and that couldn’t really be messed with. It launched in January 1971.

The remaining three missions were fast-tracked. These were going to be what was called the J missions which were scheduled to start with Apollo 16. These would have a lunar rover and allow for longer stays on the moon.

These missions, although most people have forgotten about them, were really the highlight of the Apollo program. If you’ve ever seen large detailed images from the Apollo program or higher quality video, it probably came from one of the J missions.

Apollo 15 launched in July 1971 and it was the first time the lunar rover was used on the moon.

Schmitt was different than all the other astronauts. He wasn’t a test pilot and he wasn’t in the military. He was a civilian with a Ph.D. in Geology who attended Caltech and Harvard. When Apollo 18 was canceled, the scientific community lobbied to get him moved to the last Apollo flight, and he was put on the mission so at least one scientist would make it to the moon.

The commander, Gene Cernan was had a more traditional background for an astronaut. He was a navy pilot who flew in Gemini 9, and he had previously been to the moon on Apollo 10, but didn’t land or walk on the surface. He is one of only three people to have traveled to the moon more than once.

The Apollo 17 mission was the longest Apollo mission yet. They landed on the moon on December 11 and they had 3 extended EVAs. Cernan and Harris spent 23 hours on the surface between the 3 EVAs, which was a record for any Apollo mission.

They traveled over 35 kilometers in their lunar rovers, which was also an Apollo record. Their 110.40 kg of moon rock they brought back was also a record.

At the end of their EVA, Harrison climbed back into the Lunar Module, and Cernan followed behind. Before the climbed the latter he said the following:

… I’m on the surface; and, as I take man’s last step from the surface, back home for some time to come – but we believe not too long into the future – I’d like to just [say] what I believe history will record. That America’s challenge of today has forged man’s destiny of tomorrow. And, as we leave the Moon at Taurus-Littrow, we leave as we came and, God willing, as we shall return, with peace and hope for all mankind. “Godspeed the crew of Apollo 17.”

With that, on December 15, 1972, Gene Cernan became the last person to walk on the moon.

On the way back to Earth, they had a call with the President of the United States, Richard Nixon. Nixon told the astronauts, “This may be the last time in this century that men will walk on the moon.”

This infuriated the astronauts and others back at NASA, but his words were prophetic. Since Apollo 17 48 years ago, no one has gone back to the moon.

Of the 12 men from the six missions which landed on the moon, only four of them remain. They now range in age from 85 to 90. Gene Cernan passed away in 2017 at the age of 82. Harrison Schmidt was elected to the United States Senate from New Mexico, where he still lives today.

The big question is if other people will walk on the moon before we lose the last of the moonwalkers.

China announced a desire to land someone on the moon, but to date, they haven’t really taken any firm steps to make that happen.

NASA announced project Artemis which is supposed to land astronauts back on the moon in 2024. They hope to start launching tests in 2021 and they have already begun work on the development of lunar landers. The plan would be to land a man and the first woman on the moon, somewhere near the lunar south pole.

The big problem, however, is money. Congress just isn’t enthused about sending people to the moon. It is the same problem with plagues NASA back in the 1970s. Without funding, many space observers doubt that the 2024 deadline will be achievable. One solution might be to use private companies like SpaceX to get to orbit at a lower price to save money.