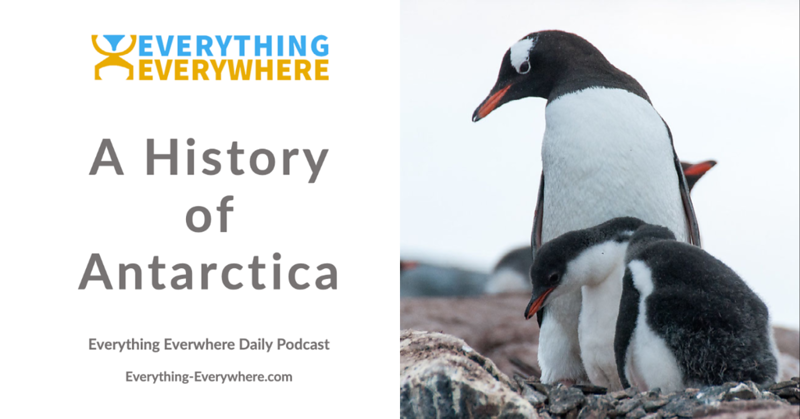 Antarctica has been an object of fascination since it was first discovered by explorers in the early 19th century.

Despite never having had a permanent human population, or as far as we know even a temporary population, Antarctica does have a history. Perhaps not as long and rich a history as Africa or Asia, but a history nonetheless

Learn more about the history of the seventh continent at the bottom world on this episode of Everything Everywhere Daily.

This episode is sponsored by G Adventures.

One of my most memorable moments traveling was getting to visit Antarctica. It was an epic journey that took me to the Falkland Islands, South Georgia Island, and Antarctica. Like thousands of other travelers, I went to Antarctica on the M/S Expedition with G Adventures. It was an experience that I still talk about to this day.  There is nothing quite like the sight, sound, and smell of landing on a beach with a quarter million penguins.

If you would like to plan your dream trip to Antarctica, go to Everything-Everywhere.com/gadventures, or click on the link in the show notes.

The history of Antarctica goes back 175 million years when the Pangea supercontinent broke up and the landmass which became Antarctica separated from its neighbors, Africa, India, and Australia.

At that point, there were actually animals and plants on the land we call Antarctica, but it also wasn’t at the bottom of the world at this time either.

Slowly over millions of years, as Antarctica began to shift south, temperatures dropped, and precipitation piled up. Whatever plans and animals which existed on the landmass died as things got colder and light during the winters disappeared.

As things got colder, the snow and ice began to pile up. Seriously pile up. As moisture in the atmosphere fell as snow, it never left. It piled up so much that today there is over 4.7 kilometers of ice above the surface.

As human civilization arose around the world, no one, to the best of our knowledge, ever visited Antarctica or knew of its existence.

However, there was always speculation that there was some land in the south. No one actually had any evidence of a great southern land, but it was a belief held by a great many people.

Aristotle said, “Now since there must be a region bearing the same relation to the southern pole as the place we live in bears to our pole…” Aristotle, who was wrong about pretty much everything he thought about the natural world, figured that there had to be land masses that balanced each other out on each hemisphere.

The term for this unknown land was Terra Australis Incognita or the unknown southern land.

As European explorers set out in the 15th and 16th centuries, they eventually rounded the Cape of Good Hope in Africa and Cape Horn in South America, and they realized that if there was land to the south, it was separated by an entire ocean.

Captain James Cook, to whom I will dedicate an entire episode at some point in the future, spent the better part of three years from 1772 to 1775 looking for it. His crew even crossed the Antarctic Circle, becoming the southernmost humans at that point. However, they were coming from the southern Pacific, and that part of Antarctica is well below the Antarctic circle.

After his voyage, he wrote in his journal, “I firmly believe that there is a tract of land near the Pole, which is the Source of most of the ice which is spread over this vast Southern Ocean.” He of course would later be proven right.

You might have noticed that the phrase Terra Australis Incognita sounds suspiciously like some other continent, and that is true.

Many people thought that Australia was the great southern land. The name Australia was given to it by Matthew Flinders who circumnavigated it in 1804.

Flinders said, “There is no probability, that any other detached body of land, of nearly equal extent, will ever be found in a more southern latitude; the name Terra Australis will, therefore, remain descriptive of the geographical importance of this country and of its situation on the globe“

However, not everyone thought that Australia was the end of the story as far as southern lands were concerned.

The first human to lay eyes on the continent of Antarctica was probably the Russian expedition led by Fabian Gottlieb von Bellingshausen who on January 27, 1820, saw the great ice shelf in what is today Queen Maud Land.

This was actually only three days before a British expedition lead by Captain Edward Bransfield saw the tip of the Antarctica peninsula. For a long time, everyone thought that the Bransfield expedition found Antarctica first, due to translation issues with Bellingshausen’s diary.

The first person to step foot on Antarctica was John Davis, who was part of an American expedition in 1821 that was looking for sealers.

Once the existence continent was confirmed, the imaginations of explorers wandered to becoming the first person to reach the South Pole. This activity didn’t begin in earnest until the early 20th century.

In 1901, the first real attempt to reach the South Pole took place with the British Discovery Expedition. This expedition was a who’s who of Antarctic explorers with Robert Scott, Ernst Shackleton, Edward Wilson, Frank Wild, Tom Crean, and William Lashly. All of whom would return to Antarctica on future expeditions.

They managed to get to 82 degrees south, which was still over 800 kilometers from the pole.

However, they did prove that an extended trip into the center of the continent was possible.

The next expedition which started in 1910 was the Terra Nova Expedition, lead by the aforementioned Robert Scott. This time, they weren’t just going to see how far they could go, their objective was to reach the pole. Scott didn’t assume that anyone else would be trying for the pole while he was making his attempt.

The North Pole was reached by a team of Americans in 1909. Norwegian explorer Roald Amundsen was going to attempt to reach the North Pole, but when it had been achieved, he quickly pivoted and turned his attention to the South Pole.

The race to the south pole was won by Amundsen who reached it on December 14, 1911. They managed to beat the British by using sled dogs and skis.

Scott and his team reached the South Pole almost a month later on January 17, 1912, and perished on the trip back. Their journals were found later that year, only 12 miles from their rendezvous point where they were going to get supplies.

In 1915, Ernst Shackleton, having missed the opportunity at being the first person to the pole, attempted to do the first crossing of the continent. The expedition was a total failure with their ship having been stuck in ice and destroyed.

It began one of the most remarkable tales of survival in history and ended almost a year and a half later with a harrowing voyage across the southern ocean in a small boat, and all his men surviving.

After this era of exploration, there wasn’t much attention given to Antarctica for decades. There were whaling ships that visited the peninsula and some small whaling stations, but that was about it.

It wasn’t until 1957 that anyone returned to the South Pole since it was reached by Scott and Amundsen in 1911.  Sir Edmond Hillary, one of the first people to summit Mount Everest in 1953, lead the Commonwealth Trans-Antarctic Expedition which crossed the continent overland, completing what Shackleton failed to do over 40 years earlier.

During this period of exploration, countries were staking claims in Antarctica. Britain, Norway, Argentina, Chile, Australia, and France have all made claims to the continent. All of the claims are wedges that meet at the south pole, and many of the claims overlap with each other. Brazil, Peru, the United States, Russia, and South Africa have all reserved the right to make future claims.

All of the claims were suspended in 1959 with the signing of the Antarctic Treaty. Officially, the continent doesn’t belong to anyone so long as the treaty remains in effect.

Currently, there are about 70 permanent research stations in Antarctica from 29 different countries. The largest station is the American McMurdo Station which can house up to 1,200 people during the Antarctic summer. All logistics for the base are done through Christchurch, New Zealand.

There is a permanent base at the South Pole. It is the Amundsen–Scott South Pole Station which is also operated by the American National Science Foundation.

There is actually a 995-mile or 1,6000-kilometer snow road which connects the two bases. The road is just compacted snow with filled in crevasses.

In the summer, the population of Antarctica is approximately 10,000 people, and in the winter it drops to about 1,000.

There have been people born in Antarctica. In 1978, Argentina sent some families there to help establish their claim. Emilio Marcos de Palma became the first person born on the continent on January 7 of that year.

The deadliest disaster in the history of the continent occurred in 1979 when an Air New Zealand sightseeing flight crashed into Mount Erebus, the second highest peak in Antarctica, killing 237 people on board.

The British Base at Port Lockroy runs a post office (again to help establish their claim) which claims to be the southernmost post office in the world. I mention this because I actually sent a postcard from there which took the better part of a year to actually arrive.

Tourism is the only real industry allowed in Antarctica. Each year about 30,000 people will visit the continent, the majority of which are on small expedition ships. The International Association of Antarctica Tour Operators or IAATO regulates about 95% of the operators who visit Antarctica.

While most of the land in Antarctica is covered with ice, there are some areas known as dry valleys which are some of the driest, most desolate places on Earth. The cold weather ensures that there is no humidity. The mountain ranges they lie between blocks snow from falling and forces extreme catabatic winds to blow down the valleys, where speeds can reach up to 200 miles per hour, or 316 miles per hour.

In 1991, scientists discovered Lake Vostok, a lake of liquid water which is 4 kilometers below the surface of the ice. There have been ice cores drilled down almost to the surface of the lake, and at some point, there are plans to send a probe into the lake to see if they can find exotic forms of life, which might indicate that life could be possible below the ice in Jupiter’s moon, Europa.

The future of Antarctica will largely depend on what happens with the ice cap which sits over 98% of the land and contains 70% of the Earth’s fresh water. As the Earth warms, more land may get exposed which could possibly start a race for resources. If that were to happen, the Antarctic Treaty could very well fall apart.

For the time being, Antarctica will continue to be the least populated, driest, highest, and coldest continent on the planet.