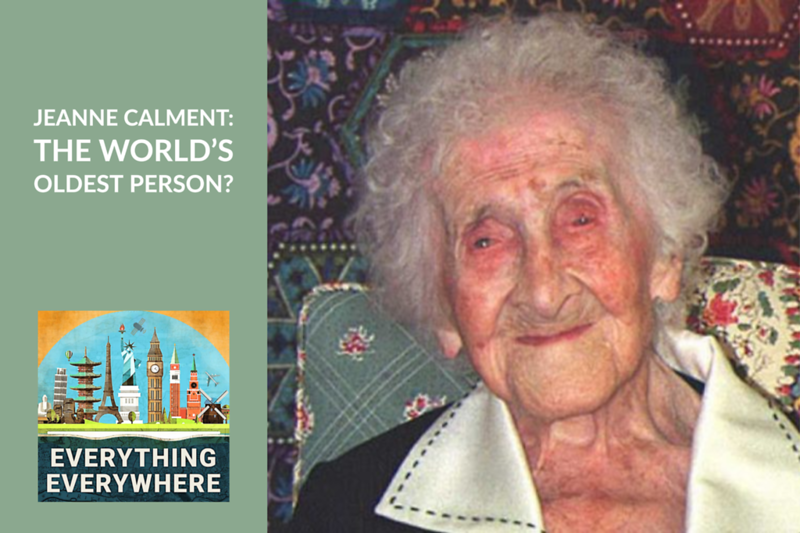 On August 4, 1997, Jeanne Louise Calment passed away in Arles, France. At the time, it was reported that she was 122 years and 164 days old. No one else has ever been verified to have ever even lived to the age of 120.

However, in the years since her passing, many people have begun to question her story. Not only might she not have been a supercentenarian, but she might not have even been a centenarian at all.

Learn more about Jeanne Calment and if in fact, she is the oldest person who ever lived on this episode of Everything Everywhere Daily.

As the story is told, Jeanne Louise Calment was born on February 21, 1875, in Arles, in the south of France.

Longevity was a trait that ran in her family. She had a brother which lived to be 97 and her father lived to be 93.

But for her last decade, her life would have been very unremarkable and there wouldn’t people doing podcasts about it in the 21st Century.

She had by all accounts a normal childhood. Her father was a shipbuilder. She attended primary school. She lived with her parents until she was 21 when she married her first cousin.

The couple only had one child, a daughter named Yvonne who was born in January 1898.

In 1926, Yvonne married an army officer named Joesph Billot, and they had a child named Frédéric that same year.

Her brother died in 1962, and in 1963 both her son-in-law and her grandson died within weeks of each other.  They were her last living heirs.

In 1965, at the age of 90, she signed what turned out to be one of the best deals in history. She sold her apartment in Arles on the condition that she be allowed to live out the remainder of her days in the apartment, and she would receive a monthly stipend which was the equivalent of €380.

She lived in the apartment for 20 years until 1985 when she was 110. She received over twice the value of her apartment.

In 1986, at the age of 111, she began to get on the radar of the media. She was recognized as the oldest person in France. At 112, the Guinness Book of World Records recognized her as the world’s oldest living person.

Finally, she passed away in 1997 at the age of 122. Not just the oldest person who ever lived, but holding that distinction by quite a large margin. Almost three years.

Documenting the age of extremely long-lived people has always been very difficult, especially considering that most of them were born at a time when record-keeping wasn’t very strict.

However, the French government and the Guinness Book did verify that Jeanne Calment was in fact born in 1875.

However, after her death, there were many things about her story which didn’t sit right with many people.

In particular, a Russian doctor of geriatrics Valery Novoselov had some serious issues.

Novoselov looked at photos of Calment and they just didn’t seem right. As a geriatric specialist, he had seen many many patients with advanced age. The photos he saw of a 110-year-old Jeanne Calment looked like someone who was 90.

The photos of her at 70 looked like someone who was 50.

He expressed his concerns online to a Russian mathematician named Nikolay Zak. He calculated the odds of someone reaching the age of 122 to be infinitesimally small. Longevity records are usually set by months or weeks, not years, as with the case with Calment.

There were other discrepancies with her story. She never spoke of the cholera epidemic which ravaged Arles in 1884.

When she moved out of her apartment in 1985, she had a relative burn all of her personal effects.

An ID card from the 1930s had a different color for her eyes. Almost all people shrink in height over time, but according to her listed height, she was almost the same height at 114 as she was at 50.

She told stories about a maid who took her to school, but when the records were checked, the maid was younger than Jeanne Calment.

They started doing an advanced analysis of her photos through the years, looking at particular parts of her face.

Jeanne Calment was actually her daughter, Yvonne, who was born in 1898. She had actually died at the age of 99.

What they believe happened is that Yvonne didn’t die in 1934. Jeanne actually died at the age of 59. Yvonne assumed the identity of her mother to avoid estate taxes.

It explained why Jeanne’s grandson often called her mother. She was his mother. It explains why she continued to live with her son-in-law to the end of his life. He wasn’t her son-in-law, he was her husband.

All of this probably would have gone unnoticed, save for the fact that Jeanne, aka Yvonne, managed to live a long time. Tack on 23 years to an already long life, and suddenly you have something which makes news all over the world.

Supposedly in 2007, a book about the French insurance industry was published which claimed that her real identity was uncovered in the 1990s before she died, but it wasn’t released because they didn’t want to tarnish her reputation.

There have been other claims of extreme longevity around the world, and almost all of them have been proven to be false or fraudulent.

Detailed studies have found that supercentenarians, people who lived to the age of 110, drop off dramatically in areas where there was proper record keeping of births. In many cases, the incentive for fraud is usually tax avoidance and government benefits.

In one study a full 65% of people who have claimed to be 110 are either wrong or lying.

I should note that none of the facts brought forward by the Russian researchers is a smoking gun. None of it can disprove anything. However, when put together, they do make a pretty damning case, and much of the evidence points towards the theory of Yvonne assumed the identity of her mother.

A group of French researchers has defended Calment’s true age as being 122, but then again, there is no way they can really prove it either, and they also can’t really explain all the discrepancies in the story. Also, they have a strong incentive to defend their results just to save face.

So, was Jeanne Calment the oldest person in world history? There is no way to know for certain. I do tend to agree with the words of Norris McWhirter, the co-founder of Guinness World Records, who said, “No single subject is more obscured by vanity, deceit, falsehood, and deliberate fraud than the extremes of human longevity.”