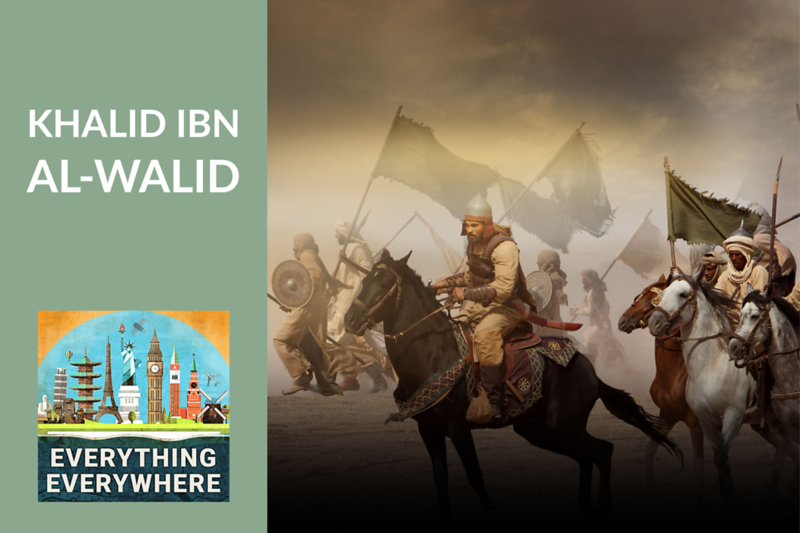 In the 7th century, the world saw the rise of one of the most important religious and political forces in history: Islam. Springing forth from the Arabian Peninsula, within a matter of years, the Islamic Caliphate had become one of the largest empires on Earth.

Much of that growth was due to one man. He wasn’t a religious leader, and he wasn’t the head of the empire. He was one of the greatest military leaders in history.

Learn more about Khalid Ibn al-Walid, the Sword of Allah, on this episode of Everything Everywhere Daily.

My audiobook recommendation today is In God’s Path: The Arab Conquests and the Creation of an Islamic Empire by Robert G. Hoyland.

In just over a hundred years – from the death of Muhammad to the beginning of the Abbasid Caliphate – the followers of the Prophet swept across the whole of the Middle East, North Africa, and Spain. Their armies threatened states as far-flung as Western Europe and China.

The conquered territory was larger than the Roman Empire at its greatest expansion, and it was claimed for the Arabs in roughly half the time.

How this collection of Arabian tribes was able to engulf so many empires, states, and armies in such a short period has perplexed historians for centuries.

Robert Hoyland’s groundbreaking new history assimilates not only the rich biographical information of the early Muslim sources but also the many non-Arabic sources, contemporaneous or near-contemporaneous with the conquests.

Khalid was born Khalid ibn al-Walid ibn al-Mughira al-Makhzumi in the town of Mecca in what is today Saudi Arabia.

There isn’t a lot we know about his early life other than where he was born and his family. He was probably born sometime around the year 585.

He was born into the Banu Makhzum clan, which was one of the elite clans in the Quraysh tribe. His father was the local equivalent of a judge and ruled on matters brought before him.

His grandfather introduced foreign trade to Mecca bringing goods from Yemen and Ethiopia. His uncle was the lord of Mecca and the Makhzum was consider noble and wealthy.

When the prophet Mohammed began preaching and spreading his new religion in the early 7th century, the Makhzum were the primary opponents of Mohammed. Mohammed was also a Quraysh tribe but in the Hashim clan.  The Makhzum saw Mohammed and his new religion as a threat to their power and control over Mecca and the greater Hejaz, which today is the western part of Saudi Arabia bordering the Red Sea. The Makhzum lead the Quraysh against Mohammed and his followers.

There were several military confrontations between the Quraysh and followers of Mohammed, and for the most part, the Muslims won all of them, save for the battle of Uhud in the year 625.

At the Battle of Uhud, one of the Quraysh leaders was Khalid, who brought his units to the rear of Mohammed’s forces, resulting in a route.

This was the first battle which he led, and shockingly enough, it was against Mohammed. Nonetheless, he won.

After that, the Quraysh and the Muslims signed the Treaty of Hudaybiyyah, which created a peace between Mecca and Mohammed’s forces in Medina, and also allowed Mohammed’s followers to make a pilgrimage to Mecca.

In the year 629, Khalid converted to Islam and moved to Medina. There, he put all of his energy into Islam and the creation of a Muslim state.

You can sort of make an analogy between Khalid and Saint Paul. Both of them persecuted members of the religion to which they eventually converted, and both of them were instrumental in the growth of that religion.

I don’t want to make too much about the comparison, however, because, beyond those two facts, their lives and how they went about spreading their religion were very different.

In 629, Khalid took part in the conquest of Mecca, which resulted in most of the citizens of the city converting to Islam.

He also saved an ill-fated Islamic expedition that had traveled north to what is today the country of Jordan. There, the Muslims clashed with the largest power in the region for the first time, the Romans, aka the Byzantine Empire.

He managed to get the Romans to retreat through the use of subterfuge and deception, to make it seem as if the Muslim forces were larger than they actually were.

When he returned to Mecca, he was given the title “Sayf Allah” by Mohammed, which means the “Sword of God”.

He then was given responsibility for converting other towns in the vicinity of Mecca, in the Hejaz. He was highly successful, if at times a bit overzealous. In one case, he executed the leaders of one tribe, even though they had already converted.

When the prophet Mohammed died in 632, many of the clans and towns which had pledged allegiance to Mohammed broke their allegiances and ceased paying tribute.

He was given command of an army by the new leader of Mecca, Abu Bakr, and was sent to bring the wayward tribes back into the fold.

Known as the Ridda Wars, Khalid spent the next year moving through the central Arabian peninsula. Everywhere he went, he was victorious. Within the span of a little over a year, he brought the bulk of the Arabian Peninsula under the control of Mecca.

Gathering troops, he then took an unauthorized detour into modern Iraq and marched up the Euphrates River. He met the Persians in what is today Kuwait and defeated them.

He marched his troops up the western bank of the Euphrates River conquering and converting towns along the way. He eventually met a combined Roman and Persian army of 60,000 men at Firaz. Despite being vastly outnumbered, he managed to flank the Romans at a river crossing and surrounded them in a pincer movement.  Their defeat ensured Muslim control of Mesopotamia.

In 634, he was then ordered to Abu Bakr to send relief to a Muslim force that had become bogged down in Syria.

He famously led 800 men into the desert to get to Syria. There was one stretch where they had to cross a desert which was six days between watering holes. His men didn’t have enough storage for that much water, so he took camels which he slaughtered every day to access the stored water in their humps.

This desert crossing is probably the most famous story of Khalid Ibn al-Walid in Islamic literature.

Syria was firmly in control of the Byzantines.

He won several smaller engagements with smaller towns, and then in August of 635, laid siege to and conquered the city of Damascus. According to legend, he received intelligence about the city celebrating the birthday of the Emperor’s son, and use that to attack the weakest gate in the city while everyone inside was occupied.

This was all was a lead-up to what would be the most significant battle in the career of Khalid, and one of the most important battles in world history. The Battle of Yarmouk in 636.

If you haven’t heard of the Battle of Yarmouk, you probably should. I’m definitely going to devote a full episode to it in the future. This was the showdown that pitted Byzantines against Arabs, and more importantly Christians against Muslims.

The battle took place near what is today where the Syrian, Jordanian, and Israeli borders all meet, southeast of the Sea of Galilee, near the Yarmuk River.

The combined Muslim forces were around 25,000 to 40,000 men. According to contemporary sources at the time, the Byzantines with their Persian allies had about 140,000 men, although some modern historians only put the number at about 40,000.

Either way, Khalid and his men were outnumbered.

Over a period of six days, Khalid defeated the larger Byzantine force through a series of brilliant tactical decisions, whereas the Byzantines tried to succeed with their larger numbers, and using traditional military doctrine.

He used the speed of his mounted forces to compensate for his lack of numbers and never allowed the enemy to amass their larger force.

After the Battle of Yarmuk, in 638, he dismissed Khalid as the supreme military leader.  There isn’t a consensus among historians as to why he did this, but there are several reasons offered. He was concerned about how Khalid would often disregard orders and act independently, there were several issues in his past regarding morality, and probably most importantly, Khalid was extremely popular, especially amongst the soldiers.

Khalid was the biggest potential threat to Omar, so he relieved him, but did so in a way that allowed him to keep most of his military honors.

Khalid died in 642, but the details surrounding his death are vague. He died either in Medina or in Homs, Syria.  Homs is the place that claims to have his tomb, and it has been the site of a large mosque since the 12th century.

The legacy of Khalid Ibn al-Walid has only grown over time. He is widely considered to be the greatest Muslim general in history. His techniques were later used by Islamic armies after him to expand throughout the Middle East, Central Asia, and North Africa.

It is believed that Khalid was the commander in 100 battles, and never lost a single one.

This makes Khalid Ibn al-Walid not just one of the most successful generals in Islamic history, but in world history.