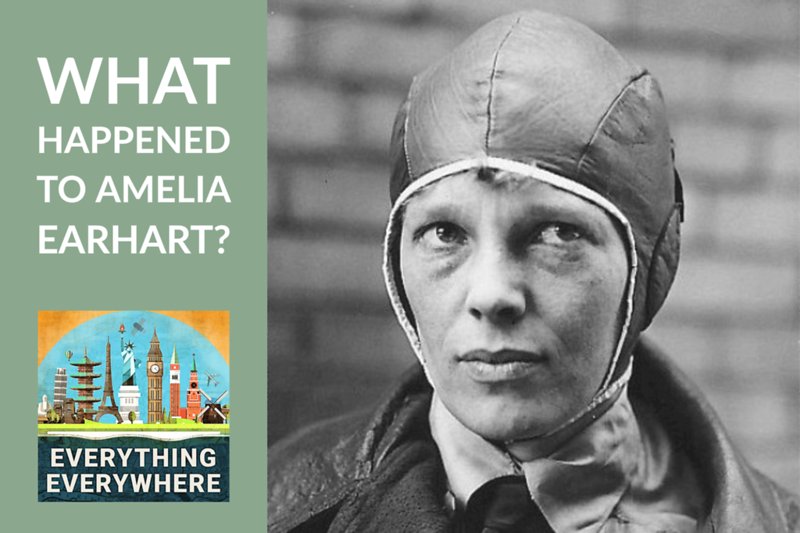 Amelia Earheart was a pioneer in the early days of aviation. She became the first woman to fly solo across the Atlantic. She was the first person to fly solo from Hawaii to California.

In 1937, she set out on her greatest adventure ever. It would be the longest single flight in history and it would take her around the world.

However, on July 2, 1937, she took off from Papua New Guinea and was never seen again.

Learn more about the disappearance of Amelia Earheart, and what probably happened to her, on this episode of Everything Everywhere Daily.

Here is a question: What is the best time of year to buy a snowblower? Answer: In the summer, when you don’t need it. When a blizzard hits, everything will be sold out.

By the same measure, the summer is a great time to buy clothing for the fall and winter. Don’t wait until you need it. Get it beforehand.

Scottevest has a great collection of men’s and women’s clothing and jackets for fall and winter. Not only will it keep you warm, but it also can store all of your gear and technology that you carry with you.

I’ve been wearing Scottevest clothing almost every day for years and I can attest to its comfort, practicality, and style.

Even if Amelia Earhart hadn’t so famously disappeared, she would still have been remembered as one of the pioneers of aviation, and one of the most significant figures of the 1920s and 1930s.

She grew up in Abeline, Kansas, and later moved with her parents to St. Paul, Minnesota, and then to Chicago. She picked her high school in Chicago based on their science labs.

She worked as a nurse in 1917 in Toronto, coming down the Spanish Flu, and then in 1919 enrolled in Columbia University for a year. She initially intended to study medicine.

However, her life changed forever on December 28, 1920, when in Long Beach, California, she flew in an airplane for the first time with noted air racer Frank Hawks.

That 10-minute, $10 dollar flight set her on a course that would change history.

She immediately knew that flying was what she wanted to do, and she set out to learn how to fly.

She took a series of odd jobs to save up the $1,000 needed for her to take flying lessons.

She arrived at the Kinner Airfield near Long Beach and was taught by another female aviation pioneer, Mary “Neta” Snook.

She began setting records almost immediately. In 1921 she purchased a used biplane. In 1922, she used it to fly to 14,000 feet, setting a women’s altitude record.

In 1923, she became only the 16th woman in the United States to receive a pilot’s license.

In 1924, she briefly returned to Columbia and was going to attend MIT, when her family’s financial problems prevented her from further study.

She moved to Boston with her mother where she remained active in local aviation.

In 1927, Charles Lindbergh captured the world’s attention by becoming the first person to fly across the Atlantic Ocean solo.

The next year, a team wanted to have the first woman fly across the Atlantic. They selected Earheart as the right woman who could handle the media attention and had the necessary skills.

She accompanied pilot Wilmer Stultz and co-pilot/mechanic, Louis Gordon, on the flight in June 1928. Because of the nature of the aircraft, she hadn’t been trained on the instruments, so she was literally just a passenger.

When she landed in Wales, she told the press, “Stultz did all the flying—had to. I was just baggage, like a sack of potatoes.”

Then she added the prophetic statement, “… maybe someday I’ll try it alone.”

When Earheart and the crew returned to the United States, they received a ticker-tape parade and met the president. Earhart became an instant celebrity. She became known as “Lady Lindy”.

She embarked on a nationwide lecture tour, which is what you did back then to capitalize on fame. She published a book, was given endorsement deals and became an associate editor at Cosmopolitan magazine. Almost all of this was arranged by publisher and publicist George Putnam.

Despite all her fame, there was one thing that nagged at her. Her record of crossing the Atlantic wasn’t really her own. She was just a passenger. She wanted to set her own records.

In August 1928, just two months after her transatlantic flight, she became the first woman to fly solo across North American and back.

She began competitively air racing. She sat on the board of the National Aeronautic Association.

In 1931, she set a world altitude record of 18,415 feet. She also married the aforementioned George Putnam, and she did something which was almost unheard of at the time. She kept her last name.

On May 20, 1932, she fulfilled the prediction she made four years earlier by becoming the first woman to fly across the Atlantic solo.

By the end of 1935, she had held no fewer than seven world speed and altitude records.

However, she had something much bigger planned. She wanted to take the longest flight in history, circumnavigating the Earth while staying as close to the equator as possible.

She began planning the flight in 1936. It would require a lot of planning. She had a customized plane built. She had to also plan a route with fuel stops, which was not trivial at that time.

In March 1937, she made her first attempt, flying westward, but the flight never got past Honolulu due to mechanical issues

Later that year, she tried again. This time, however, she was going to fly going east instead of west. Her only crew member was Fred Noonan, her navigator.

Beginning in Oakland, they flew to Miami. From there, they went to Venezuela, Brazil, crossed the Atlantic to Africa, flew across the Sahara, the Arabian Peninsula, India, down Southeast Asia, to northern Australia and Papua New Guinea.

In Papua New Guinea they were set to tackle the most dangerous and challenging part of the voyage: crossing the Pacific.

On July 2, 1937, Earhart and Noonan took off from Lae, Papua New Guinea to fly to Howland Island.

Howland was a normally uninhabited island that had a small American staff for refueling transpacific flights.

A coast guard ship called the Itasca was off Howland Island to support the flight.

The radio operators of the Ithica were the last people to have contact with Earheart and Noonan. They had received radio transmissions saying they were low on fuel and at 8:45 am July 6, they received their last transmission. They never arrived at Howland Island.

Search efforts began almost immediately, within one hour of the last radio transmission. The Itasca was the only ship in the area and began searching. Within four days, more navy ships were deployed.

Eventually, search efforts centered around the island of Nikumaroro in the Phoenix Islands, which is today in the nation of Kiribati. Nikumaroro is about 350 miles south of Howland.

Search efforts continued for almost 2 weeks, and it was the largest search and rescue operation in US history up until that point.

The disappearance of Earheart sparked a cottage industry in theories about what happened. Books, articles, and films were dedicated to the mystery.

The most common theory is that the plane simply ran out of fuel, crashed into the ocean, and sank.

However, others have gravitated to the theory that she managed to put the plane down. If she was low on fuel, she would have searched for somewhere to land. They believe she might have landed on the island of Nikumaroro.

In 1940, a human skull and bones were found on the island along with a box with a sextant. However, an analysis at the time said they were the bones of a male.

Believe it or not, there has been progress, or at least new takes on the evidence, over the last several decades.

In 1998, forensic anthropologists did an analysis on the measurements taken from the bones from Nikumaroro in 1940 and determined that they probably came from a woman of European descent.

In 2018, another study reported that the 1940 bones fit the known profile of Amelia Earhart at a 99% rate compared to a sample of 2,700 other Americans from that time period.

However, these studies have also been criticized because they didn’t actually inspect the bones because they were lost at some point when they were sent to Fiji. They only had the original measurements.

Some theories speculated that Earhart and Noonan were captured by the Japanese, who took them for American spies. They were later executed, either on a remote island or in Japan.

Yet other outlandish theories say she became Tokyo Rose, and some say she took on an assumed identity and went to live in New Jersey.

The truth is, there no hard evidence, one way or the other, to explain exactly what happened to Amelia Earheart.  Unless one day someone should find the wreckage of her plane at the bottom of the Pacific, which after 84 years is highly unlikely, we might never know the truth.

The disappearance of Amelia Earheart has overshadowed her life, which is too bad. Her contributions to aviation, to which she eventually gave her life, would have made her remembered to history, regardless of how her life ended.

Today’s review comes from listener MScott224 on Apple Podcasts in the United States. They write:

Best podcast I listen to in my daily routine!

Thanks, MScott. Does MScott stand for Montgomery Scott by chance? Montgomery Scott, the chief engineer of the USS Enterprise NCC-1701 who  traveled back in time to the early 1980s to find a humpback whale, but then tried to use an early Macintosh computer but didn’t know how to use a mouse? That MScott???

Remember, if you leave a review of the show, you too can have your review read on the show, even if you aren’t an officer on a Federation Starship.