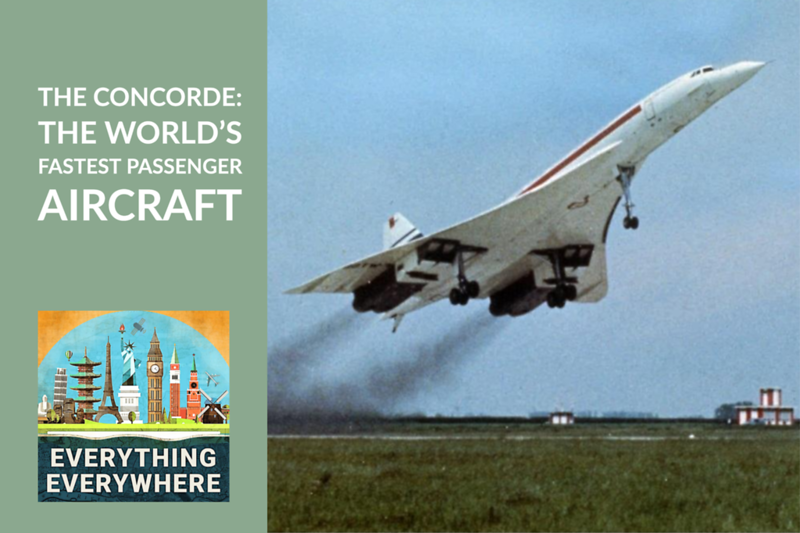 Almost as soon as Chuck Yeager broke the sound barrier in 1947, people began thinking of ways to transport passengers at supersonic speeds.

In 1976, a British/French consortium launched the inaugural flight of the most successful supersonic passenger aircraft in history.

Learn more about the Concorde on this episode of Everything Everywhere Daily.

When engineers began thinking about supersonic transportation in the 1950s, they faced a very difficult problem: economics.

Creating a plane which could fly faster than the speed of sound, even a larger passenger aircraft, wasn’t necessarily an engineering problem. Yes, there were engineering challenges to be overcome, but that wasn’t the biggest problem.

The biggest problem was creating an aircraft that could be flown faster than the speed of sound economically.

Airplanes beyond Mach 1 behave differently than planes traveling below Mach 1. The lift to drag ratio on a plane flying faster than the speed of sound is approximately half of what it is when it flies below it.

In the early 1960s, executives from US aerospace companies testified to congress that there were no technical impediments to the production of a supersonic passenger aircraft.

However, the American government’s attention wasn’t on faster passenger aircraft at the time. They were far more focused on military aircraft and on the space race with the Soviets. Sure, having passengers travel over Mach 1 would be great and all, but they were trying to put someone on the moon.

The space race left the British sort of sitting on the sidelines. They had no space program, and their national pride was still stinging from their position as a world power being usurped by the United States and the Soviet Union.

They saw the development of a passenger supersonic aircraft as a way to make a statement and restore some national pride. It would show that the British could do something that the Americans could not.

And make no mistake, the reasons for the development of the plane were almost totally political, a fact which has been corroborated many times over by the people who were responsible for the project.

That being said, there was a general belief at the time that the future of passenger aircraft was going to be supersonic, and that the earlier the British could get in on the ground floor, the better the position they would be in the long run in this market.

In 1956, the British Supersonic Transport Aircraft Committee was created.

They quickly realized that the cost of such an aircraft was going to be, pardon the pun, sky-high, so they wanted to share costs and development with another country.

The first hit up the Americans, who as I mentioned before wasn’t really interested in pursuing this as a national policy. In 1962, they found a partner and signed the Anglo-French Concorde agreement.

The name Concorde comes from the Latin word for agreement, and from the Roman goddess Concordia, who was the goddess of agreement harmony.

The French had also been working on the supersonic transport problem for several years.

When they compared notes they realized that they had come to similar conclusions about the design of the aircraft.

There were two big design details which they agreed the plane had to have. A delta wing design, where rather than have two wings sticking off the sides of the aircraft, the entire aircraft was sort of a giant svelt triangle.

The other was the droop nose. Because the plane would be traveling so fast, it had to be extremely aerodynamic, which meant a very long, slender nose of the plane. However, this prevented the pilots from seeing the runway. The solution was to have the nose droop down during takeoff and landing, and then it would straighten out while it was in the air.

One other challenge which had to be addressed was heat. Flying at supersonic speeds, especially for extended periods of time, caused a great deal of friction with the air. That would heat up the skin of the aircraft. The faster it flew, the hotter it would get.

It was the skin of the aircraft which actually limited its speed to Mach 2. If it went any faster, the aluminum skin would start to weaken due to heat.

Thought out the 1960s the French and British engineers worked on solving a host of problems. This including everything from radiation exposure from cosmic rays from flying at 60,000 feet, to the risks of extreme cabin depressurization at that altitude, to unique stresses the plane would encounter flying that fast.

Finally, on March 6, 1969, they had a prototype ready to fly. It conducted a short, subsonic flight between two airports near Bristol, England.

But, just as the Soviets beat the Americans to launching the first satellite and the first man in space, they also beat the British to flying the first supersonic transport.

The Tu-144 is probably worth its own episode at some other time, but as a commercial aircraft, it wasn’t very successful. They created 16 aircraft but they only flew 55 flights with actual passengers, and it was retired in 1978.

The prototype Concorde made a public debut at the 1969 Paris Air Show along with the Tu-144. It made its first transatlantic crossing in 1971 and over the next several years it made appearances in the Middle East and the opening of the Dallas-Fort Worth Airport.

However, before it began service, it encountered setbacks.

Environmental concerns over sonic booms became a growing problem. The United States, India, and Malaysia all banned supersonic flights over land. That limited the Concorde to flights over the sea.

Furthermore, at the 1973 Paris Air show, a Tu-144 crashed in a very public fashion, which soured most airlines on supersonic flights. Orders for the Concorde were canceled, and in the end, only British Airlines and Air France ended up buying the aircraft.

The aircraft was manufactured in both the UK and France. A total of 20 were built, including prototypes that were never put into active service.

The Concorde entered commercial service on January 21, 1976. The first British Airways flight was from London to Bahrain, and the Air France flight was from Paris to Rio.

Over the next 27 years, the Concorde was by far the fastest way to cross the Atlantic. The Atlantic crossing eventually became the only real route for the aircraft. There was an attempt at creating a London-Singapore route, but the Malay and Indian governments forbade supersonic flights over their country.

Likewise, flights to Mexico City were tried, but they had to fly at subsonic speeds across the US.

The most popular routes were between Heathrow and JFK, and Charles de Gaulle and JFK.

In addition, to the previously mention Singapore, Rio, and Mexico City routes, there were also flights to Washington Dulles, Miami, and Barbados. Most of these routes were simply not viable.

That being said, London or Paris to New York had quite a bit of demand.

The record for the Concorde flying across the Atlantic was in 1996 when it flew from New York to Lonon in 2 hours 52 minutes and 59 seconds. Flying from London to New York was about 3 hours and 30 minutes on average.

The Concorde developed a reputation for being a luxurious experience. The average price of a ticket, adjusted for inflation in today’s currency, was anywhere between $3,000 and $12,000 dollars.

That being said, you paid for speed, not luxury per se. The Concorde was rather narrow, and the seats weren’t like business class seats in today’s airplanes. The food and service were first class, but the plane was built to solve engineering challenges first, and the seats were second.

There would often be multiple flights per day, so it was not unheard of for people to fly across the Atlantic for dinner, and then be back home in the evening.

Even though it only had 100 seats, you would regularly find celebrities and millionaires on flights.

The end of the Concorde began on July 25, 2000, when Air France Flight 4590 crashed after takeoff at Charles de Gaulle Airport in Paris. A piece of debris on the runway punctured a tire, and the tire flew into one of the fuel tanks causing an explosion. The crash killed all 100 passengers and 9 crew.

Prior to the crash, the Concorde had one of the best safety records of any aircraft. There had been zero fatalities on any Concorde since its first flight in 1976.

The crash dramatically decreased demand for the Concorde and a little over a year later the September 11th attacks only made things worse.

On April 10, 2003, Air France and British Airways simultaneous announced that they were retiring the Concorde.

It wasn’t just soft demand for Concorde flights that caused its retirement. By 2003, the basic design of the aircraft was over 30 years old. Aviation design and computer technology had advanced, and it just wasn’t worth it to pay for the maintenance to keep the planes flying.

Virgin Airlines actually offered to buy the remaining Concorde fleet, but there was no interest from Airbus, the manufacturer, in maintaining them.

Today 18, of the 20 Concordes which were built are on display. Most of them are in the UK or France, but there are 3 in the US and 1 in Germany, and 1 in Barbados.

Since the retirement of the Concorde in 2003, there hasn’t been a commercial supersonic flight anywhere in the world, nor has another supersonic airline been built since the 1970s.

However, there are new companies that are trying to tackle the supersonic passenger market again.

One company called Boom Supersonic just received an order for 15 supersonic jets from United and they hope to start delivering passengers by 2029.

One of the things which they hope to do with their new generation of supersonic planes is to lessen the power of the sonic booms to allow the planes to fly over land.

So, maybe one day, within the next 10 years, you will be able to raise a glass of champagne to the Concorde while traveling at March 2 somewhere over the Atlantic Ocean.