The year was 1945.  The United States and the rest of the world had been at war for years, and the casualties were mounting.  After defeating Germany, all eyes turned to the Pacific theater.  America was making headway in the hopscotch war for tiny islands, and the top brass was beginning plans for an invasion of mainland Japan.  They codenamed it “Operation Downfall” and they knew the losses on both sides would be heavy.  It was planned to begin in October, and 500,000 purple heart medals were ordered in advance of the invasion.

The scientists of the Manhattan Project were on the clock.  Led by Dr. J Robert Oppenheimer, they were tasked with building an atomic bomb.  It looked like they had a workable design, but they needed to test it.  After looking at eight different sites, the government selected a spot in southern New Mexico near Alamogordo.  The government already controlled that area of desert, and the surrounding space was sparsely populated.  They called it the Trinity Site.

On July 16, 1945, they tested the first nuclear bomb and it brought the war to a swift end.  The enormous number of purple heart medals weren’t needed (and are still being used today).  The landscape of Hiroshima and Nagasaki, Japan were forever changed.  It was truly a monumental event.

Today, The Trinity Site is a national landmark.  However, it is somewhat inconveniently located in White Sands Missile Range.  For obvious reasons, the government can’t open the area to the public year round.  But they do open it for 6 hours every year in what they call the Trinity Site Open House.

What to Expect at the Trinity Site Open House

We entered through the northern gate – Stallion.  We arrived near the opening time of 8:00 am.  We waited in line for about 15 minutes, handed our driver’s licenses to the military man at the gate (all of our licenses – not just the driver) and then entered.  We were not allowed to take photos once we entered White Sands until we reached the Trinity Site.

We drove along a paved road for about 20 minutes until we reached the site.  More military men directed us into parking spaces, and we exited the car.  We walked with the crowds of people on a fenced path to a fenced field.  In the middle of the field was a lava rock obelisk.

Also present was a mock-up of the Fat Man nuclear bomb, and the large canister nicknamed “Jumbo” which was originally supposed to contain the nuclear blast before scientists determined it would be useless to try.  Along the fence were historical photos about the test, the site, and the aftermath of the bombing.

There is also the McDonald/Schmidt house on the property where the bomb was assembled.  It wasn’t open in 2014 when we were there and signs said it was “Temporarily Closed.”  (The house is accessible for six hours a year, so I’m not sure why they couldn’t be bothered to open it this year.  “Temporarily” is relative, I guess.)

Tip: Wear sunscreen and bring a hat. It is the desert! I definitely got a little burnt. Also, the wind was pretty crazy and I was glad I brought a hair tie.

When the bomb exploded, the desert sand was heated to 14,710 degrees Fahrenheit and was scooped up into the large blast fireball. As the sand fused together it fell back to the earth as a rain of molten glass.  This was a brand new substance and scientists called it Trinitite.  At one time this green glassy substance covered much of the depression created by the blast.  But the newly formed Atomic Energy Site filled the depression and hauled away much of the Trinitite. 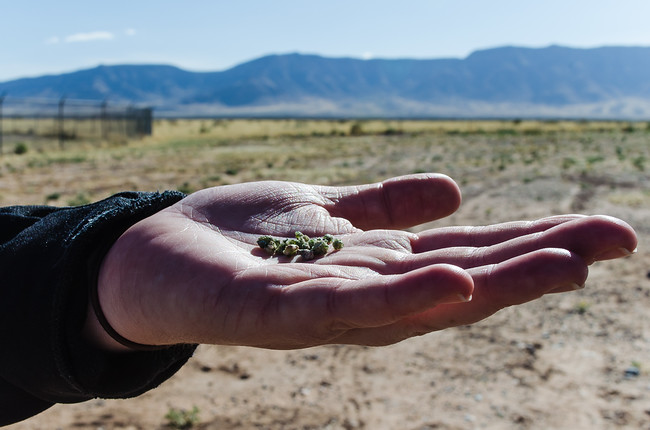 There were pieces on hand to look at, touch, and play with.  Geiger counters click-click-clicked when they were swiped over them, and it was neat seeing something so rare.

Reflections Upon Leaving the Site

There isn’t much to do or see at the Trinity Site. There are is no entertainment. There aren’t interactive exhibits. But it is a place to reflect on history and a neat place to think about science.  As we left the site, we saw the line had gotten larger and there was a protest at the gate.

Was the nuclear bomb a technology the world could have done without or did it save enough lives we were justified using it?  Those answers wouldn’t be found in the New Mexican desert, but it was interesting to stand where this complex time in human history began. 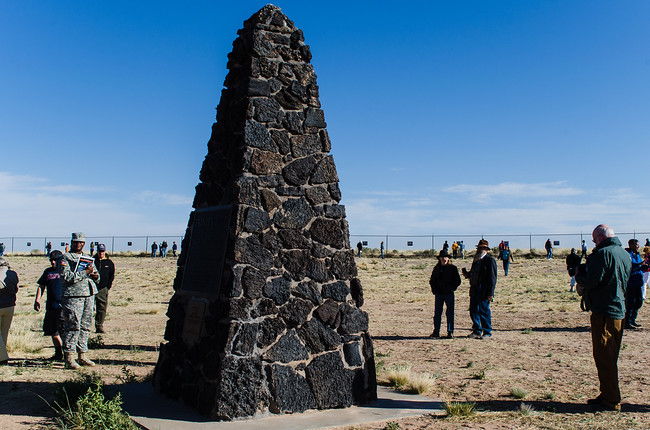 Where is the Trinity Site