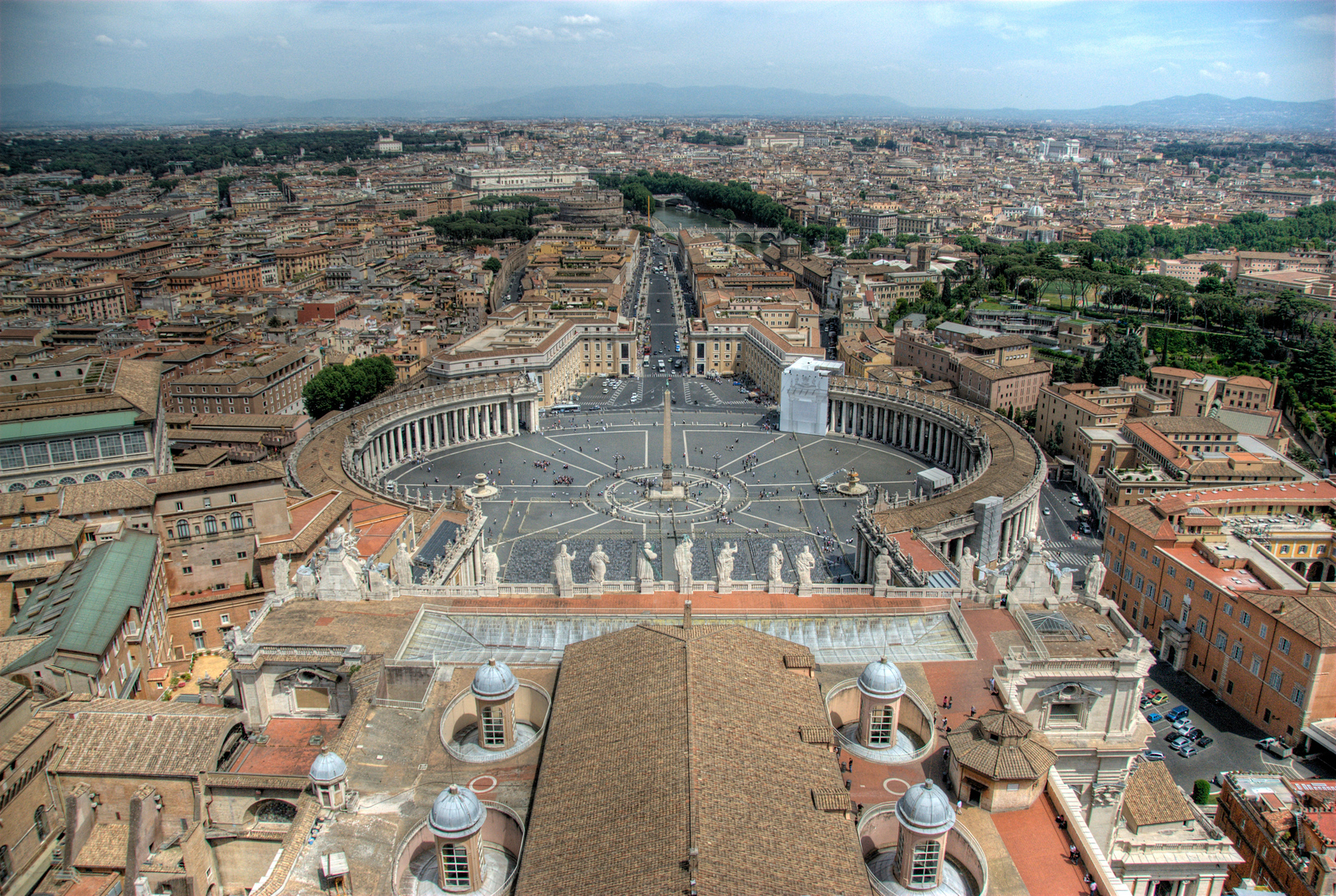 From the World Heritage inscription for Vatican City:

The Vatican City, one of the most sacred places in Christendom, attests to a great history and a formidable spiritual venture. A unique collection of artistic and architectural masterpieces lie within the boundaries of this small state. At its center is St Peter’s Basilica, with its double colonnade and a circular piazza in front and bordered by palaces and gardens. The basilica, erected over the tomb of St Peter the Apostle, is the largest religious building in the world, the fruit of the combined genius of Bramante, Raphael, Michelangelo, Bernini and Maderna.

Vatican City is the only country in the world where the area of its world heritage sites is greater than the size of the country (it has locations in Rome which it controls). The photo above is of St. Peter’s Square taken from atop the dome of St. Peter’s Basilica.

Vatican City is a walled enclave located within the city of Rome. It is more popularly referred to simply as “The Vatican”. It is a sovereign state and the smallest one in the world. To give you an idea, Vatican City is only about 44 hectares in land area with a population of no more than 1,000 people. This makes the Vatican the smallest country in the world in terms of area and population.

Vatican City is a district of the Holy See. Its history date back to the time of early Christianity and is considered as the main episcopal for more than 1 billion Eastern and Latin Catholic adherents in the world. However, it wasn’t established as an independent state until 1929 upon the signing of the Lateran Treaty between Italy and the Holy See. According to the treaty, the Holy See has full jurisdiction and sovereign authority over Vatican City.

The Vatican City is home to many religious and cultural sites. Despite its small size, it actually has a lot to offer its visitors. Below are some of the highlights of visiting the Vatican:

St. Peter’s Basilica – The Papal Basilica of St. Peter in the Vatican is an Italian Renaissance church. It is also the most renowned architectural feature of Rome, which is a combined work of Michaelangelo, Donato Bramante, Gian Lorenzo Bernini, and Carlo Maderno. This church isn’t the mother church of the Catholic faith, but it is considered as one of the holiest shrines and one of the largest churches in the world. It is also a popular site for pilgrims and for liturgical functions.

Vatican Museums – This museum is located in Vatican City and displays a collection of works built up by the Popes throughout several centuries. In fact, the most renowned Renaissance art masterpieces and classical sculptures are housed within this museum. Currently, there are more than 70,000 works within the museum and only 20,000 of those are on display. The museum was founded by Pope Julius II in the onset of the 16th century.

Before you venture travel to Vatican City, here are some interesting facts you need to know:

1. It is the smallest country in the world. The entire Vatican measures at a little more than 200 acres in land area (or about 1/8th of New York City’s Central Park). Despite of that, it has its own stamp, passport, flag, anthem, and license plates.

2. The Vatican City was established as an independent state by Benito Mussolini. In 1929, the dispute between the Italian government and the Catholic Church ended with the Vatican established as a sovereign state.

3. It was only in the 14th century when Popes started to move into the Vatican. Prior to that, the Pope would live in Lateran Palace.

4. The number of citizens in Vatican City is more or less at 600. Majority of the residents consist of Cardinals, Swiss Guards, clergy, nuns, etc.

5. The Swiss Guards were hired to provide personal protection to the pope. This is the smallest standing army in the world but is made up of highly trained and skilled men.