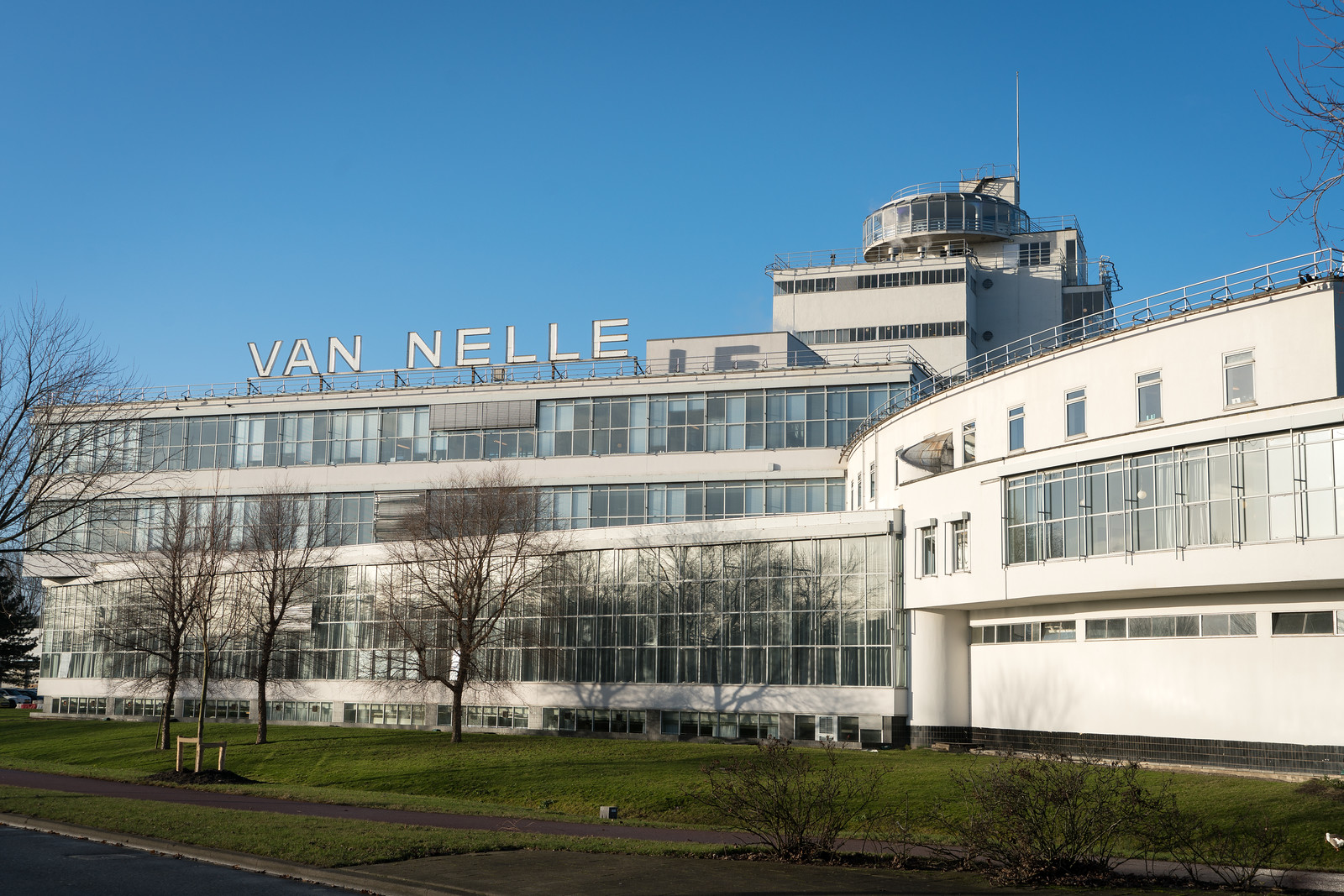 Designed and built in the 1920s, the Van Nellefabriek demonstrates an extremely accomplished industrial architecture. It comprises a complex of buildings consisting of several factories aligned along the perspective of a large internal roadway, and close to several means of transport (canals, roads, railway lines). Supported on an internal structure of reinforced concrete, the facades of the main buildings consist essentially of steel and glass, making large-scale use of the curtain wall principle. Via a common purpose agreed between the entrepreneur and the project architects and engineers, the Van Nellefabriek embodies an ideal factory, open to the outside world, whose interior working spaces are progressive, and in which daylight is used to provide pleasant working conditions. It embodies the accomplished realization of a new kind of factory that has become a symbol of the modernist and functionalist culture of the inter-war period. Lastly, it bears witness to the long port-related economic tradition of the Netherlands, in the processing of imported food products (coffee, tea, and tobacco) and their marketing in Europe.

Van Nellefabriek is the former headquarters of the Van Helle Company which was an importer of coffee, tea, and tobacco in the Netherlands. The site was placed on the world heritage list primarily because of its architectural significance, being one of the best early examples of modernism.

Many of the original furnishings such have doors, knobs, and toilet fixtures are still in place.

How to Get to Van Nellefabriek

Van Nellefabriek is located in Rotterdam, Netherlands and is approximately 4km away from the Rotterdam city center. It is easily accessible by taxi or car. There is also a bus stop right across the street from the facility which makes it easily accessible via public transportation.

How to See Van Nellefabriek

Van Nellefabriek is still a functioning commercial space with offices and event space. Because it is a working facility, you can’t just walk in. There is a guard desk at the front gate which requires you to check-in.

Unless you know someone who works in the facility, your opportunities to tour it are limited to two options.

Van Nellefabriek is a cultural UNESCO World Heritage Site in the Netherlands. This property was added to the UNESCO list in 2014. This building is a factory located in Rotterdam, Netherlands. The building features a modern Nieuwe Bouwen architectural style. It was constructed in 1925 and was completed in 1931. The building is a work of two architects: Leendert van der Vlugt and Johannes Brinkman.

Van Nellefabriek, also known as Van Nelle Factory, is an industrial complex. It has become an iconic site in the Netherlands due to its symbol of modernism. It is also an important international trade port and center of commercial activity in Rotterdam.

The Van Nellefabriek was known as an ‘Ideal Factory’ when it was constructed in the 1920s. The entire factory is made out of steel and glass. Hence, the entire industrial complex is filled with an environment of light, air, and space.

The buildings within the Van Nellefabriek complex are designed by Architect Leendert van der Vlugt. He also worked with Engineer J.G Wiebenga who specialized in construction using reinforced concrete. The main factory was built over a 6-year period from 1925 to 1931. Many claim it to be the best example of modern architecture in the Netherlands.

The building of Van Nellefabriek was commissioned for by its co-owner: Kees van der Leeuw. The owners were highly impressed by the quality of the design created by van der Vlugt that they hired him again to build their private homes in Rotterdam.

In the 20th century, when the Van Nellefabriek was still operational, it was a factory that is focused on the processing of coffee, tobacco, and tea. Eventually, the operations in the factory expanded such that they also manufactured chewing gum, rice, instant pudding, and cigarettes, among other things. The operation at the said factory came to a halt in 1996. Today, it is home to new media and design companies. In fact, it was re-named to Van Nelle Design Factory. Some portions of the factory are used for events, meetings, and other related functions.

The architecture of the Van Nellefabriek is influenced by Russian Constructivism. The architects hired to build this factory came into contact with Russian Avant-Garde during the 1920s in Berlin, Germany. They used this influence in order to create unique designs such as the one that they created for this factory.

In 2015, Van Nellefabriek was recognized as one of the 25 most beautiful factories in the world. It is also considered a Dutch national monument aside from being a UNESCO World Heritage Site.

View the complete list of UNESCO World Heritage Sites in the Netherlands.