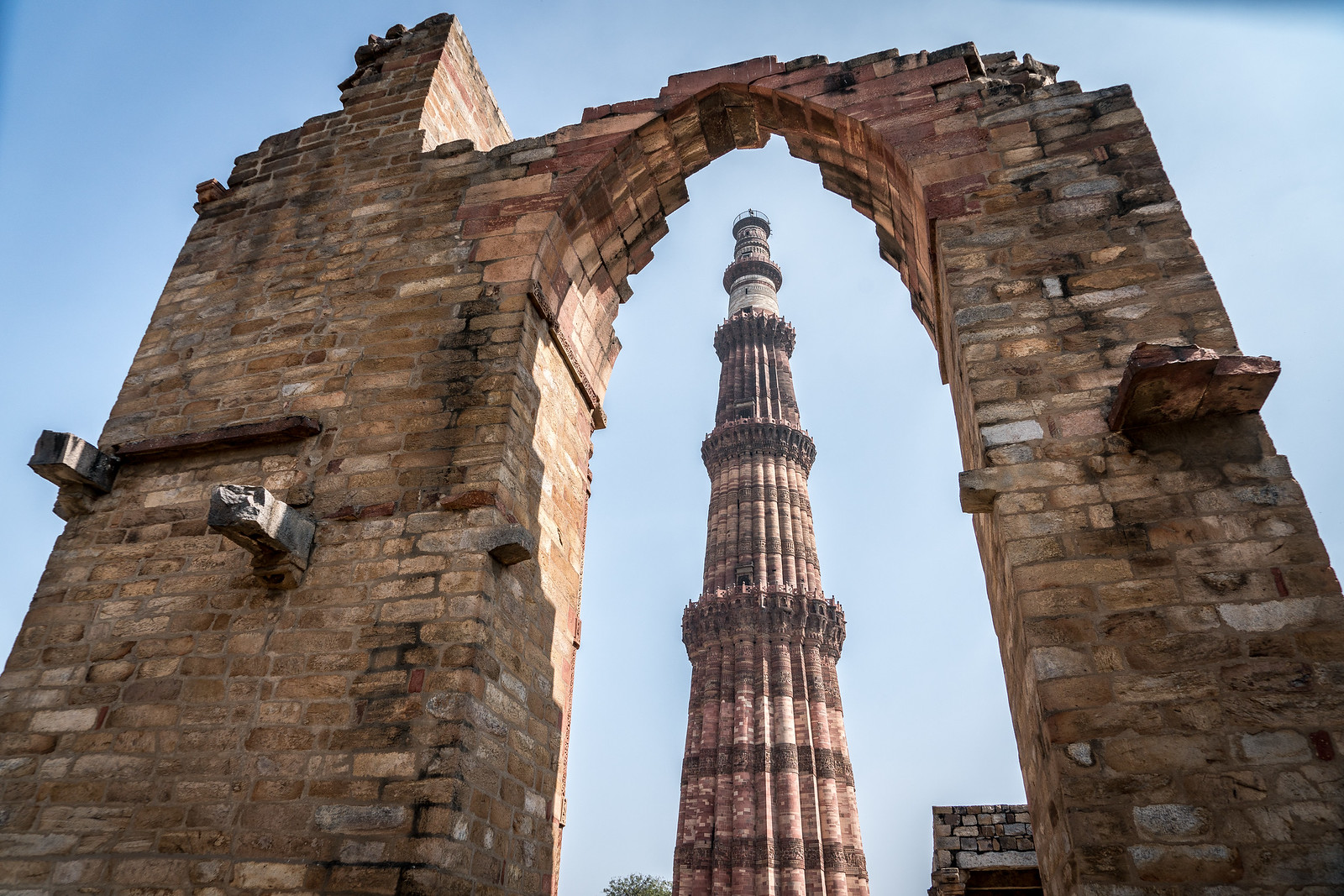 Built in the early 13th century a few kilometers south of Delhi, the red sandstone tower of Qutb Minar is 72.5 m high, tapering from 2.75 m in diameter at its peak to 14.32 m at its base, and alternating angular and rounded flutings. The surrounding archaeological area contains funerary buildings, notably the magnificent Alai-Darwaza Gate, the masterpiece of Indo-Muslim art (built in 1311), and two mosques, including the Quwwatu’l-Islam, the oldest in northern India, built of materials reused from some 20 Brahman temples.

The tower began construction in the year 1200 and was commissioned by the Sultan Qutb al-Din Aibak. An additional 3 levels were added in 1220. The top 2 levels were destroyed by lightning in 1369 and were replaced.

A second tower was intended to be twice as large as the first was attempted. You can see the base of the tower today, which is as far as construction ever got.

There is also the home of the Iron Pillar of Delhi, a 7m (23 ft) iron pillar which was constructed in the year 402. The pillar has inscriptions written in Sanskrit and has been very resistant to rust over time.ss

The tower and the surrounding structures were placed on the UNESCO World Heritage list in 1993.

I personally felt that this was the most impressive of the world heritage sites in Delhi. The tower is unique in both its height and age.

Qutb Minar gets a fair amount of visitors, but nothing like what you will see that the Red Fort in Delhi.

Located in the southern part of Delhi, it is easily accessible by taxi and is part of the most guided tours of the city. The entry fee for foreigners is 250 rupee.

Qutb Minar and its Monuments is a cultural UNESCO World Heritage Site in India. This monument was inscribed into the list in 1993. This UNESCO site consists of a group of religious monuments and funerary buildings that are known for their architectural display of the achievements of early Islamic India. Most of these monuments are located in South Delhi.

The Qutb Minar is the focal structure within this UNESCO site. It is located in Delhi and measures 73 meters in height.

About Qutb Minar and its Monuments, Delhi

Qutb Minar and its Monuments centers around the red sandstone tower known as Qutb Minar. This tower was built in the early 13th century and is located south of Delhi. This tower is surrounded by several archaeological monuments and particularly funerary structures.

In order to learn more about the significance of this UNESCO site, it is important to look into what’s inside the complex.

Qutb Minar is a tall tower that rises 5 stories and 73 meters in height. It starts with a diameter of 14.3 meters at the base and then reduces to 2.7 meters once you reach the peak of the tower. You can reach the top of the tower via a spiral staircase consisting of 379 steps. The design of this tower is said to have been based on the Minaret of Jam in Afghanistan.

This tower was built in 1192 by Qutab Ud-Din-Aibak. However, it was his successor and son-in-law who saw through the completion of the building of this tower. It was damaged by a lightening storm in 1369 but the tower was reconstructed to add the damaged story.

This mosque is one of the important structures that belong to the complex with the Qutb Minar and its Monuments. Many consider it as one of the most magnificent works in the world despite in its ruined state. The original mosque was constructed in 1139 AD and was finished in 1197 AD. There were subsequent additions to the mosque over the years. This mosque comes with an inner and outer courtyard. It is also known to be of historical importance in India.

The Iron Pillar is another important component of the Qutb Minar and its Monuments UNESCO site. This is a 7-meter tall kirti stambha that was originally built as dhjava to Vishnu. It was King Chandra who ordered it to be built in the 3rd to 4th century CE.

The Tomb of Iltutmish was constructed in 1235 AD. It is located near the Qutb Minar for the third ruler of the Delhi Sultanate – Shams ud-Din Iltutmish. The interior walls of the tomb are decorated with a highly finished nament.

Alai Minar is another notable component of the UNESCO site Qutb Minar and its Monuments. It is an unfinished tower that is part of the Qutb Complex. When this tower was built, it was envisioned to become twice as tall as the Qutb Minar. But constructed came to a halt in 1316 and it was never finished.

1 thought on “Qutb Minar and its Monuments”