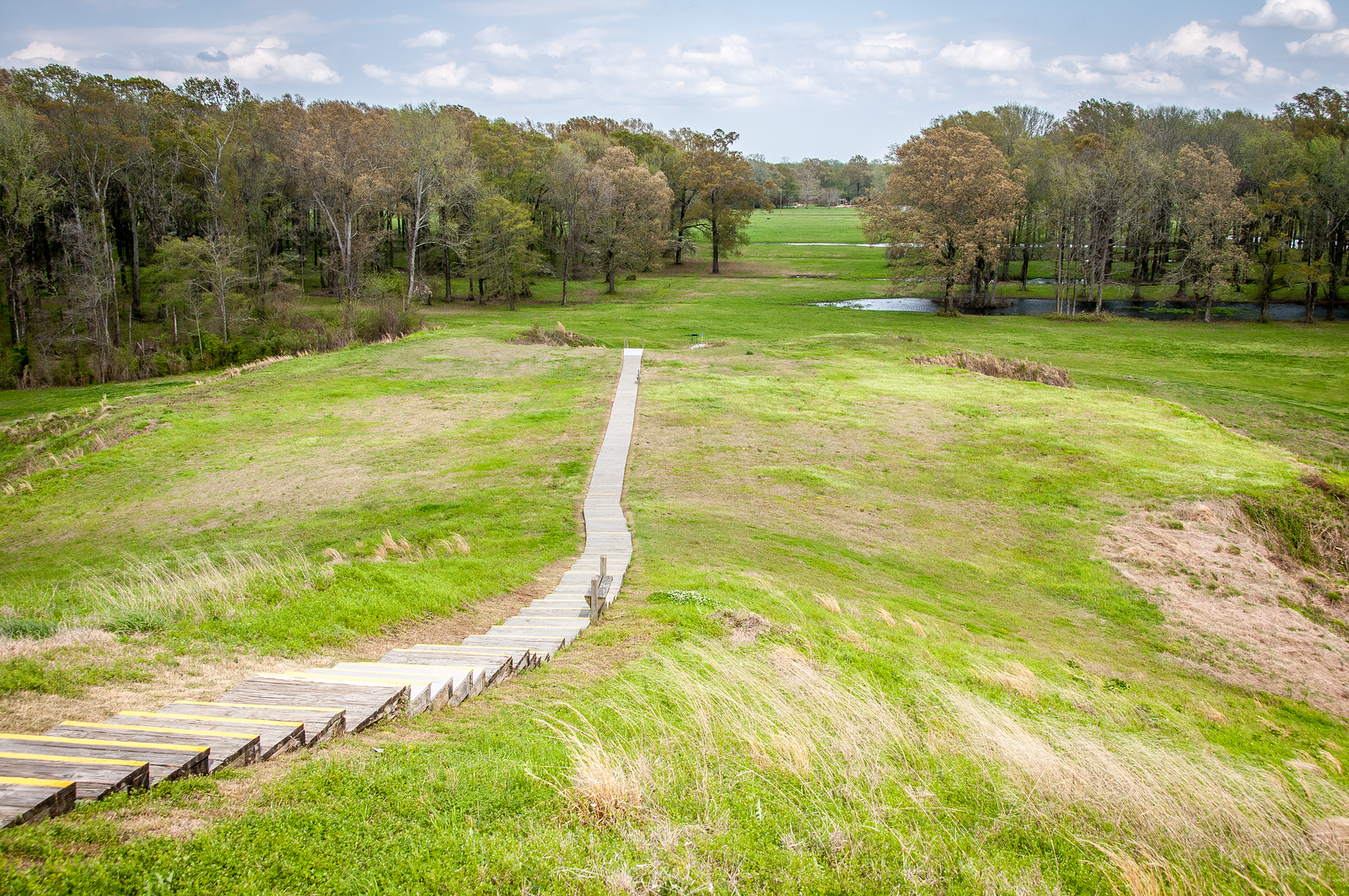 From the World Heritage inscription for the Monumental Earthworks of Poverty Point:

Monumental Earthworks of Poverty Point owes its name to a 19th-century plantation close to the site, which is in the Lower Mississippi Valley on a slightly elevated and narrow landform. The complex comprises five mounds, six concentric semi-elliptical ridges separated by shallow depressions and a central plaza. It was created and used for residential and ceremonial purposes by a society of hunter-fisher-gatherers between 3700 and 3100 BP. It is a remarkable achievement in earthen construction in North America that was unsurpassed for at least 2,000 years.

Poverty Point is a National Park Service Site and one of the United States’ most recent world heritage sites.

Poverty Point is an important site in the development of early civilization in North America, however, like Cahokia Mounds in Illinois, it is not very photogenic. The site consists of several earthen semicircles, most of which have been plowed or eroded to a point where you can barely notice they are there. The primary remaining structure is a large mound which today simply looks like a grass-covered hill.

There is evidence of human settlement at Poverty Point dating back 3,500 years, making it one of the oldest known settlements north of Mexico.

Poverty Point is located in northeast Louisiana and isn’t really next to any major cities. The closest major airport would probably be Shreveport which is about a three-hour drive.

The Monumental Earthworks of Poverty Point is a cultural UNESCO World Heritage Site in the US. It is located in Epps, Louisiana. The site is currently managed by the US National Park Service and the Louisiana Office of State Parks. This site was inscribed into the UNESCO list in 2014.

The entire site covered by Monumental Earthworks of Poverty Point measures 910 acres in land area and was authorized in 1988. It consists of prehistoric earthworks that are linked to the Poverty Point culture. Aside from the earthworks, there are also several mounds on the site that were estimated to have been built in 1650 and 700 BC or the archaic period.

About the Monumental Earthworks of Poverty Point

The Monumental Earthworks of Poverty Point is a 910-acre site that is also a National Monument. Poverty Point is made entirely of earthworks. The core site measures 500 acres in land area. However, archaeological excavations have covered an extra three miles of land area.

The monument consists of 6 concentric and crescent ridge earthworks. These earthworks are divided by 5 aisles that radiate from the central portion of the river bank. In addition to these 6 concentric mounds, there are many other mounds that are located inside and outside of the ring. The term ‘Poverty Point’ is derived from the plantations that surrounded this site before.

The 6 mounds that make up the Monumental Earthworks of Poverty Point are as follows:

These are platform mounds that are located along the ridges of the earthworks. The largest of the Mound A is located along the west of the ridge. The name Bird Mound is derived from the observation of others that it is shaped like a bird, especially when viewed from above. According to studies by experts, Mound A seemed to have been constructed quickly. The radiocarbon analysis also showed that the mound was built around 1450 to 1250 BCE.

This is another type of platform mound that consist of the Monumental Earthworks of Poverty Point. The archaeologists have found a human bone interred with ashes within this group of mounds. Many believe that this is a sign of cremation during prehistoric times. There is also more evidence that this could have been a burial mound. Meanwhile, others speculate that these could have been remains of human sacrifice and other forms of prehistoric rituals.

This is the mound located within the plaza of the historic site. The mound measures 6.5 feet in height. The mound also features a depression that was formed with a 19th-century wagon road that leads up to the town of Floyd in Louisiana. The final dome shape is made possible by 16 stages of development when this mound was built in the 1550 BCE.

The Ballcourt Mound, as Mound E is often known as, is also a platform mound. The flattened top led to archaeologists to calling it the ballcourt mound. Hence, it is not to be associated with any ties to the Poverty Point’s sports history.

These two mounds complete the list of 6 mounds within the Monumental Earthworks of Poverty Point. The Dunbar Mound is known for the chipped precious stones that are found in it. The archaeologists theorized that this is where the prehistoric folks would make jewelry. On the other hand, the Lower Jackson Mound is believed to be the oldest earthworks within this UNESCO site.