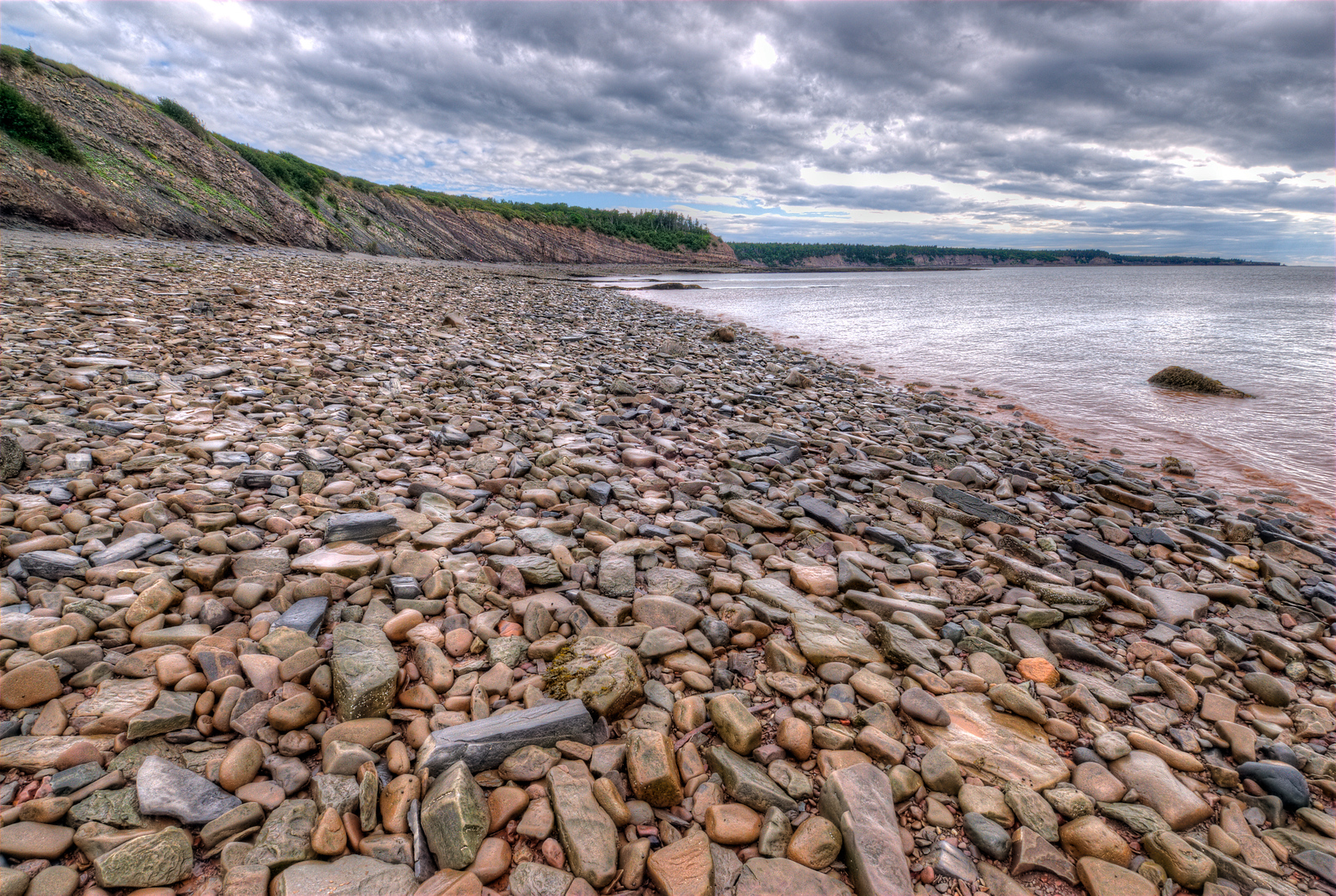 The Joggins Fossil Cliffs, a 689 ha palaeontological site along the coast of Nova Scotia (eastern Canada), has been described as the “coal age Galápagos” due to their wealth of fossils from the Carboniferous period (354 to 290 million years ago). The rocks of this site are considered to be iconic for this period of the history of Earth and are the world’s thickest and most comprehensive record of the Pennsylvanian strata (dating back 318 to 303 million years) with the most complete known fossil record of terrestrial life from that time. These include the remains and tracks of very early animals and the rainforest in which they lived, left in situ, intact and undisturbed. With its 14.7 km of sea cliffs, low bluffs, rock platforms, and beach, the site groups remain of three ecosystems: estuarine bay, floodplain rainforest and fire-prone forested alluvial plain with freshwater pools. It offers the richest assemblage known of the fossil life in these three ecosystems with 96 genera and 148 species of fossils and 20 footprint groups. The site is listed as containing outstanding examples representing major stages in the history of Earth.

The Joggins Fossil Cliffs are on the Bay of Fundy, the location of the world’s largest tides. The fossils which the cliffs are famous for can be easily seen in situ in the rock just a few meters from the visitor center. The nearby town of Joggins was once a coal mining town where they mined the coal seams laid down during the Carboniferous Era.

The Joggins Fossil Cliffs, known simply as Joggins, is known for its fossil remains. These fossils can be found within an extensive rainforest ecosystem that had been around for more than 300 million years. In fact, these fossils were dated by expert archaeologists that have originated from the Pennsylvanian Coal Age.

The coastline in the Bay of Fundy exposes the Coal Age rocks. The action of the tides coming from the Cumberland Basin has gradually exposed these rocks to the surface. It was in the late 1820s when this site captured the attention of top geologists in the world. Since then, there have been many geologic and archaeological teams that have come to the site to study it. But it was in 1852 when Sir Charles Lyell came to the site to perform paleontological studies when it gained international fame. He referred to this forest of fossil coal-trees as one of the “most wonderful phenomena” that he had ever witnessed. With his reputation as the father of modern geology, it was unsurprising how this statement caught the attention of many.

The 300-million-year old coal trees that Lyell studied are mostly scale trees (also known as lycopods) that were named as such due to the patterns on the tree barks. In his return trip to the site, Lyell brought with him the pre-eminent geologist of the 19th century, William Dawson of Nova Scotia. They both uncovered more fossils at the site include those of reptiles. To this day, these reptile fossils remain as the oldest terrestrial creatures ever uncovered. Aside from reptiles, the fossils of amphibians and land snails were uncovered at the site as well.

Are you planning a visit to the Joggins Fossil Cliffs in Nova Scotia? Here are a few things you need to know before you go: