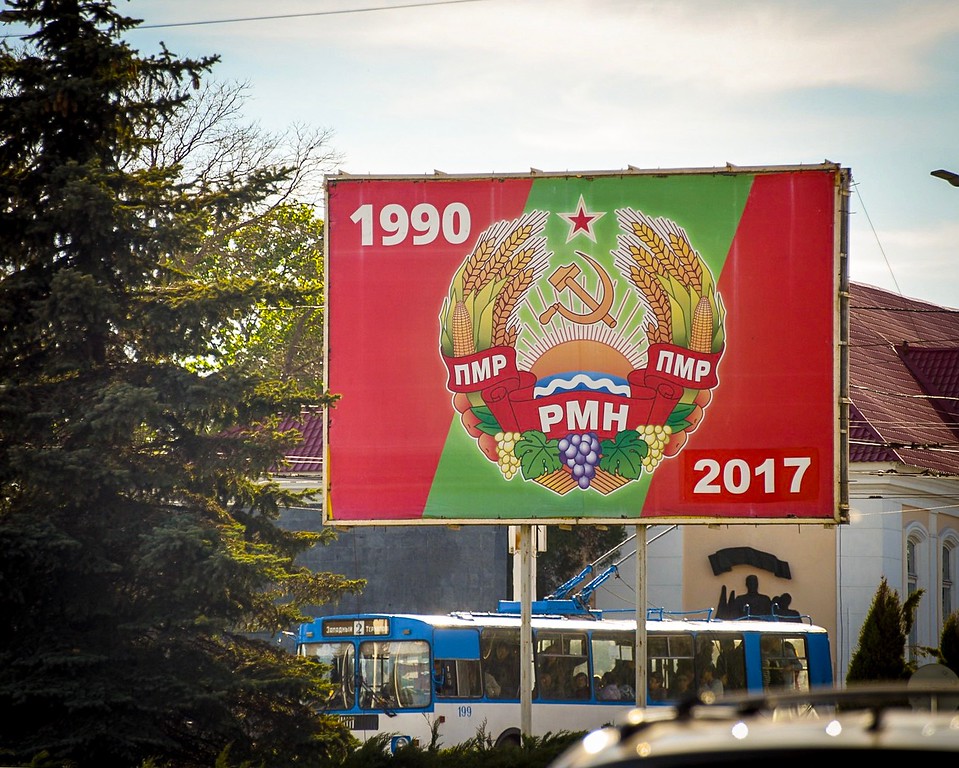 Stephanie Craig is the History Fan Girl. She has combined her love of history with travel and has been exploring Eastern Europe the last year. She recently visited the breakaway region of Transnistria, which I thought was an interesting place which more people probably need to know about. Here is Stephanie…

This story starts with a Pinterest article. It ends facing down a public squat toilet in a bus station in Odessa, Ukraine.

Oh, and a gargantuan statue of Vladimir Lenin.

And there are countries that exist on determination and the backing of a foreign army.

Transnistria is this kind of country.

It’s a country that wishes the Soviet Union was still around. They celebrate communist leaders, have Soviet parades, and flash the hammer and sickle wherever they can. But why?

It starts with a bad marriage. The country of Moldova, once upon a time, wasn’t a county either. The USSR created Moldova out of two leftovers-Bessarabia and Transnistria.

Bessarabia, like most of its Balkan neighbors, had been traded from empire to empire over the years. Under Ottoman control at the beginning of the 19th century, it was a spoil of war handed over to the Russian empire. Then, during the Russian Revolution, the Kingdom of Romania swooped in and claimed it.

Moldovans, for the most part, liked this arrangement. They are Romanians, both ethnically and linguistically. Further, Romania liked having Bessarabia in the fold.

During the Second World War, the region was returned to the USSR, but the people of Moldova still clamored to be reunited with Romania. Throughout the Cold War, the Soviets imprisoned, executed, and deported tens of thousands of Moldovans.

Before the creation of Moldova, Transnistria (or Trans-Dniester) was an autonomous region of Ukraine. As ethnic Russians in Ukraine, the descendants of Russians who had moved south to colonize the area centuries earlier, they were left relatively to themselves in the greater Soviet Union. When they were moved paired with Moldova instead of Ukraine, it had little impact on their day-to-day lives as ethnic Russians. The USSR would always there to protect them and prop them up.

Until one day, the Soviet Union collapsed.

Ethnic minorities in newly formed countries are always nervous and with good reason. Moldova proclaimed independence from the USSR, but there were rustlings about rejoining Romania. When the talk got too hot, the Transnistrians balked.

They proclaimed their independence from Moldova. There was a war, supported by Russian troops, who have remained to this day. Although a cease-fire was signed twenty-five years ago, the region has achieved semi-autonomy but no further progress towards real independence. And while Russian money and resources pour into the country, even Soviet throwbacks like Vladimir Putin won’t recognize it as a nation.

Enough with the History Already

I promised all kinds of juicy details, and all you’ve gotten up until now is a history lesson. I get it; you want to get to the cognac.

But first, back to Pinterest, the glossy website full of spectacular photos of far-away places, taunting me that I haven’t done enough, haven’t seen enough. About a year ago I came across an article from Wired about a photographer who had gotten permission to visit Transnistria for two weeks and take portraits of officials. One photograph caught my attention. it was a woman standing proudly in front of the red and green Transnistrian flag. Judging by her hair, jewelry, and the cut of her dark long-sleeved dress, the photo could have been taken fifty years ago. Only the telltale signs of digital photography gave it away.

Yes, I took a trip based on a photograph. If I hadn’t seen it, who knows where I’d have traveled instead. But I saw it, and that’s how I ended up in a taxi waiting for my driver to pay a bribe.

That Will Be 5 Euros

Everything I’d read says, when entering from Moldova, 1) go by train or bus, 2) refuse to pay a bribe and 3) make sure you get your immigration card.

I failed all three.

Running late in the morning, I asked the driver at my Moldova hotel to take me. He was a sweet kid who’d driven me before. I assumed he would be familiar with getting to Tiraspol.

Crossing the border, the guard was more interested in getting a 5-euro bribe from my driver than checking my passport. Ten minutes into the country and the local police keeping patrol by a memorialized Russian tank were similarly interested in my driver’s wallet and disinterested in my presence. I didn’t worry too much about my status yet because I was getting dropped off at the bus station and would head straight to the immigration office there. But these bribes stressed out my driver, who became uncomfortable at the thought of leaving me alone.

2 thoughts on “Traveling to Transnistria, a Day in Soviet Disneyland”