I’ve always had a fascination with the Cold War.  I wasn’t alive for the majority of it, but when I was a kid Russia (or the USSR as it was called then, children) still had a lot of mystique.  I remember vividly sleeping in the Soviet Space exhibit at the Fort Worth Museum of Science and History during a school field trip sleepover.  I feel asleep looking up at a mock-up of Sputnik.  The enchantment didn’t end there.  I took Russian language, literature, politics and history classes in college.  I still dream often of visiting there and would have named my daughter Anastasia if I hadn’t been vetoed by the husband. 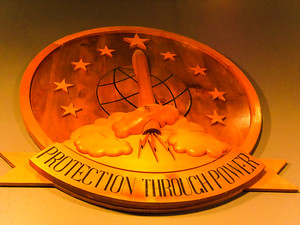 I was eleven when the Berlin Wall fell.  I remember one of my friends bought a chunk of it for $100 at Neiman Marcus.  The irony of that action wasn’t apparent in my child mind as it is now.  Except for that, it was like the Cold War just disappeared.  In high school, a friend of mine went to Russia and it didn’t seem all that odd.  Ten years before, it would have been unheard of.

When I was looking at things to see in Arizona during our latest trip there, I stumbled upon the Titan Missile Museum about a half hour south of Tucson.  I was thrilled!  It is one of a kind.  While you can stumble upon a Titan missile in a museum here or there, all the other Titan missile silos were destroyed under START (Strategic Arms Reduction Treaty),  a series of treaties in the early ’90s between Russia and the US reducing ICBM and nuclear weapons in both countries.

I was to find that at the Titan Missile Museum in spades.

We arrived at the museum on a beautiful Sunday morning in February.  The outside of the museum had a little bit of an Air Force nostalgia feel.

Stepping inside the museum, we took a look at the small exhibit and paid our money for the tour.  They handed us plastic cards with our tour number on it.  We arrived early so that we could be on the first tour of the day.  This paid off for us, for when they called the number there were only 7 people on our tour.

The tour started by us watching a video about the site, the Titan missiles, an overview of Cold War security and tour safety.  The tallest among us (which did not include me) had to put on hard hats.  Apparently, I would slide right under any hard objects that other, normal sized people might hit their heads on.

We then descended underground.  There are eight levels in all, but our basic tour didn’t visit all of them.  They give more expensive, comprehensive tours at various times through the year, but our visit did not coincide with any of them.  I shouldn’t have worried.  The basic tour was pretty freaking awesome.

Moving from the control room to viewing the missile, we learned about all the checks and balances built into processes.  It was a scary time, and no one trusted their neighbor.  They could be a spy!  To make sure that nothing was sabotaged, each crew went through a long list of checks to verify everything you could think of each and every shift.  Including checking out the bomb.

I recommend you making this stop if you are in Tucson.  We didn’t bring the kids along on this one, because they were happily playing with their little cousin.  I think that it would be a pretty great history lesson for children 8 and older.  Make sure everyone wears good shoes, because you will be going up and down stairs.  There is a lift if anyone has trouble with ladders, but we had no problems with any of the minimal physical demands of this tour.