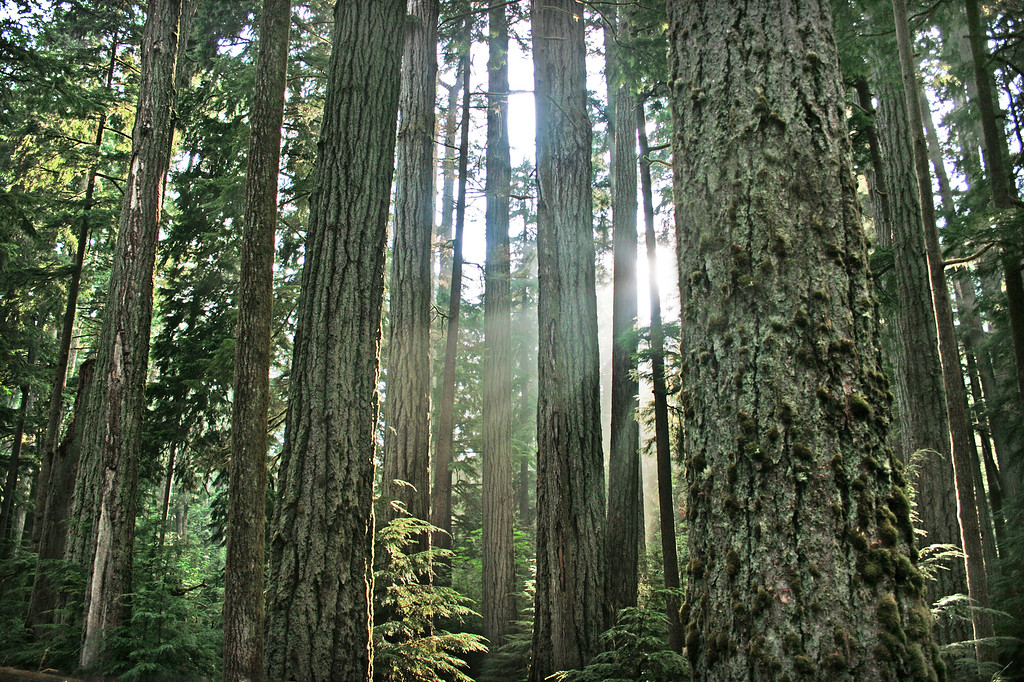 Vancouver, Canada is lucky to be home to a wealth of urban parks, including its most famous: Stanley Park. But there’s a lot more to this part of British Columbia than Stanley Park! Some parks are almost as pretty as Stanley Park, and others are pint-sized. But, all of Vancouver’s many parks are unique and filled with tons of fun things to do.

As a native Vancouverite, I’m a big fan of the city’s urban parks. Unlike Stanley Park, most of the other urban parks don’t get as crowded with visitors, and locals are more likely to use and love them.

Whether you’re a visitor to Vancouver or a local to the area, strap on your best purse and try out my six favorite parks on your next visit to Vancouver!

Starting off with the biggest park that has no shortage of things to do, this 400-hectare behemoth is one of the largest urban parks in North America, offering over 27 kilometers of trails for walking, running, cycling, and skating. Mix with Vancouver locals as you walk the gorgeous seawall, but just make sure you’re walking on the right side of the path, otherwise the locals will certainly correct you!

Located on the westernmost edge of Vancouver, this beautiful West Coast rainforest is almost entirely surrounded by water, resulting in a number of beautiful beaches, including the creatively named First Beach, Second Beach, and Third Beach. I love taking my wheeled backpack full of picnic supplies to Second Beach and spending the day relaxing in the sun. Don’t miss the great salt-water pool at Second Beach.

Stanley Park is the ancestral home of the Coast Salish people and is deservedly famous for its First Nations totem poles and Salish gateways. The collection was begun in the 1920s and continues today, with replacement poles being commissioned as the older poles are returned to their ancestral homes.

If you’re visiting Vancouver in summer, don’t miss one of my favorite things to do: watching the local theatre groups at Malkin Bowl in Stanley Park. Theatre Under the Stars performs two musicals in repertory each summer.

With so many things to do in Stanley Park, make sure you also see Lost Lagoon, Siwash Rock, the famous Hollow Tree, and the girl in the wetsuit sculpture, which is reminiscent of the Little Mermaid in Copenhagen.

Discover Stanley Park on your own, or book a tour to explore your favorite aspect of the park. A few great ones include:

If you’re looking to “chill” in Vancouver, there’s no better place than Dude Chilling Park.

This tiny park is tucked away in a residential corner of east Vancouver but has gained international fame for its unique origin story.

Originally known as Guelph Park, this urban oasis became locally known as Dude Chilling Park when a piece of public art called “Reclining Figure” was installed in the park in the early 1990s. Locals interpreted the art figure as just a dude, chilling. Thus, the local name was born.

In 2012, a local resident took it upon himself to create a name sign for the park that exactly resembled the signs that the City used for its parks. Not surprisingly, the City removed the sign and replaced it with the original sign of Guelph Park. Thereafter followed an uproar from local residents, and in 2014, the City relented and reinstalled the Dude Chilling Park sign.

Although the sign is frequently stolen, it’s quickly replaced so that residents and visitors alike can enjoy it.

Getting to Dude Chilling Park: The park is located at the corner of Brunswick Street and East 8th Ave.

You’ll find this gorgeous 52-hectare park in the heart of suburban Vancouver. A local favorite for wedding photos, Queen Elizabeth Park is also a magnet for horticultural mavens.

You can visit the Quarry Gardens, home to specimen trees and a multitude of shrubs, perennial plants, flowers, and every sort of bloom you can imagine. Add in a waterfall and you have the perfect backdrop for all your wedding photography needs. There is also a beautiful rose garden.

Queen Elizabeth Park is also well known for its many pieces of public art. My favorite is “Photo Session,” a bronze figural sculpture of three people posing in front of a beautiful view of downtown Vancouver. The most famous piece of art in the park is a work by British sculptor Henry Moore, located just outside the Bloedel Conservatory.

There’s a lot of things to do in Queen Elizabeth Park, including a local favorite pitch ‘n putt golf course, tennis courts, lawn bowling, disc golf, and of course, picnicking.

If gardens and nature entice you to explore more deeply, a few top Vancouver tours include:

Getting to Queen Elizabeth Park: The park is easily accessible via entrances on Ontario Street and West 33rd Ave., or along West 37th between Columbia and Mackie Streets. There’s plenty of public parking, as well as excellent bus service.

This unique urban park is relatively new to Vancouver. What makes Arbutus Greenway Park so unique is that it’s a north-south transportation corridor that stretches from False Creek in the North to the Fraser River in the south.

This former historic rail corridor was originally the Vancouver & Lulu Island Railway and was the route for an interurban rail line. It ceased operating in 1958, but short freight trains continued to use the route until the early 2000s. Then a funny thing happened—local citizens began to take over the rail line and used it to plant community gardens and pedestrians and cyclists become a fixture along the line.

However, all was not well as the rail company sued the City of Vancouver to rezone the land for residential and commercial purposes. The City wanted the corridor for a greenway, as that’s what the public had been unofficially doing with the land for years.

Ultimately, the City of Vancouver was the victor. In 2016, it was announced that the former rail corridor would be transformed into a greenway for walking and cycling. A streetcar route will eventually be re-established too.

The vision for the Arbutus Greenway is that it will be a defining element of Vancouver’s urban landscape as a beautiful public space, that fosters movement and social interaction.

The Greenway plans are underway and it is growing fast. I love the walk along this corridor and can’t wait to see the vision come to fruition.

Getting to the Arbutus Greenway: The Park is currently accessible via the east side of Arbutus Street and West Boulevard for 8.5 kilometers between Fir and Milton Streets. Use the bark mulch path for walking and jogging and the paved surface for cycling. The Arbutus Greenway Park is the perfect place to try out Vancouver’s Mobi bike share program!

Trout Lake Park is a 27-hectare park located in the center of east Vancouver, and it’s a very popular urban park.

This multifaceted park really does have something to do for everyone. Known as both John Hendry Park and Trout Lake Park, it boasts the large, fresh-water Trout Lake. Although sadly there is no actual trout present, this large lake is a great swimming lake—the sandy beach is very popular with local families.

Locals rave about the quiet tranquility of the nature trails in this park, and families love the diverse facilities it offers, including a large and active community center, large indoor ice skating rink, baseball, tennis, and other team sports facilities, as well as picnic and some of Vancouver’s best barbecue areas.

A lovely feature of this urban park is the magnificent views of local mountains. It’s also one of the best areas in Vancouver to see cherry blossoms in bloom in early Spring. Don’t miss the Trout Lake Farmers Market, one of the biggest in Metro Vancouver, held every Saturday from May to October in the parking lot of the park.

Getting to John Hendry (Trout Lake) Park: The park is located on Victoria Drive at East 19th Ave. Parking is free and bus service is excellent in the area. It’s an easy 10-minute walk to the park from the Broadway Skytrain station.

Located on the southwestern edge of Vancouver you’ll find this 763-hectare forested park. Nestled right beside the University of British Columbia and forming part of the endowment lands of the University, Pacific Spirit Park is very popular with locals for its walking and hiking trails, and for its great mix of forest and shoreline.

Pacific Spirit Park boasts a trail system totaling over 54 kilometers and is a local favorite of dog walkers, horseback riders, and cyclists. There are also wheelchair accessible trails.

The park is home many varieties of evergreen trees, including cedar, hemlock, Douglas fir, and Sitka spruce, as well as vine and big leaf maple, red alder, and bitter cherry. If you’re hungry and favor local produce, you’ll also find a large variety of berry bushes.

Pacific Spirit Park is a great place to commune with birds and small animals. Expect to see barred owls, eagles, and other smaller birds. Watch out for the skunks and raccoons, as well as coyotes, voles, and squirrels.

Vancouver’s only clothing-optional beach, Wreck Beach, is located at the western edge of the park. The beach is on the base of a cliff and the trails leading down to the beach area are steep and not accessible to strollers or wheelchairs. The main trails down to the beach are unmarked but are located on the sides of the Museum of Anthropology.

Getting to Pacific Spirit Park: There is a parking lot on 16th Avenue, 400 meters west of Blanca Street. Bus service is excellent along 16th Avenue, Chancellor Boulevard and Southeast Marine Drive.

When you’re traveling through Canada, whether on an epic road trip or visiting the country’s best national parks and UNESCO sites, Vancouver should absolutely be a top spot on your itinerary. There are no shortage of things to do in Vancouver.

Lesley is a travel enthusiast, avid motorcyclist, and aspiring retiree! She has traveled extensively while working 9-5 and is downshifting soon to make traveling her full-time job. With Vancouver as her home base, Lesley shares her travel adventures on her blog freedom56travel.com.