About 350 km away from the tech-city of Bengaluru lies the hippie land of Hampi. The underdeveloped villages leading to the ruins at Hampi makes it difficult to believe that once upon a time this used to be one of the most prosperous cities in the world. A trip to Hampi is like stepping into a 3D history book. Hampi is famous for temples and monuments that were built during the Vijayanagara Empire, a Hindu dynasty that flourished in the 14th and 15th century.

It is in this period that some of the most stunning architectural monuments of the world were carved out of rocks—known officially as the Group of Monuments at Hampi, it’s now recognized as one of India’s 37 UNESCO World Heritage Sites. The city was plundered by Islamic invaders—many temples were destroyed and stripped off all the precious artifacts, however, even in their ruins they never fail to stun visitors. While most of the masterpieces of the Vijayanagara Kingdom are concentrated in Hampi, you can find them throughout South India. Let’s take a closer look at the key monuments and temples in Hampi, as well as a list of the best things to do—use this as a starting point when planning your Hampi itinerary.

Things to See at Hampi Monuments

Most travelers visit the group of monuments at Hampi over about three days. There are lots of things to see in the area, and taking a guided tour for at least one of the days is a good idea. You can also explore these other top temples and sites.

Hire a bicycle and explore the ruins.

The best way to explore Hampi is on a bike. You can also rent a scooter or moped. The advantage of the bicycle over other modes of transport is that you can visit the nooks and corners without worrying about parking.

There are so many attractions in Hampi that the thought of navigating through them in a short trip can be overwhelming. The Hampi Archaeological Museum is the best starting point for this trip. It has a 3D map of the city, which will help you plan your explorations around the Hampi temples. It has a rare exhibit of coins and sculptures excavated from the ruins, some of which date back to the Chalukya Dynasty of the 11th-13th centuries.

Explore the Royal Enclosures of Hampi


The Royal Enclosure was the seat of the emperor of Vijayanagara Kingdom and naturally the home to many significant monuments. Everything here was destroyed during the invasion. But there are still things to see here: the king’s audience hall, the queen’s bath, horse stables, the octagonal bath are some key structures to explore. The most important monument here is Mahanavami Dibba.

The other Royal Enclosure is also called Zenana Enclosure. It’s enclosed by big walls, and historians are divided on what this area used to be used for during the Vijayanagara Kingdom. Some believe it was a harem, a place where the royal women lived, which is why it is named so. Others claim that it was a military area, the Elephant Stables and guard’s quarter is what support their claim. The most impressive structure in the Zenana Enclosure is the Lotus Mahal Temple.

Marvel at the Hemkunta group of temples.

Located in the Hampi Bazaar is a hill painted with stone temples dated to the 9th through 14th centuries. It used to be fortified with stone walls, the ruins of which can still be traced now. The Hemkunta group of temples have a distinct style different from the rest of the Group of Monuments at Hampi. A canvas of stones, as it is rightly called, this is one of the best photography zones in Hampi.

Virupaksha Temple is one of the oldest living temples of India. This marvelous monument of worship was raised in the 7th century and was revamped by the kings of the Vijayanagara era. The beautiful shrine is one of the Hampi group of monuments that are recognized by UNESCO. It’s famous for the elephant Lakshmi who blesses the tourists when they offer her coins. It’s also famous for a small slit in the wall, which exhibits a pinhole camera effect. Lord Ganesh is the main deity of this temple, and that is reflected a classic amalgamation of Hoysala, Chalukya, and Vijayanagara styles of architecture.

Take a coracle ride on the Tungabhadra River

All the things to see highlighted so far are in the south of Hampi. Northern Hampi is separated from the south by the mighty Tungabhadra River. You can take a coracle ride to cross the river and reach north Hampi, or simply take a ride on the river to admire the cave temples located on both sides of the river. Sunset is the best time for this experience. The precarious rocks and cave temples look magical with a sunset-sky.


The impeccably carved stone chariot, which has become an international icon of Hampi, stands in the premises of the Vijaya Vittala Temple complex. The Vittala Temple is an epitome of Vijayanagara architecture. You should hire a tuk-tuk from the parking area for just Rs. 20 to take you to the main temple complex. You can also walk 1.5 km through the ruins of Vittala Bazaar instead.

As soon as you enter the gate, the stunning chariot greets you. On one side is a temple famous for its musical pillars, and on the other side is a temple famous for the stories depicted through the inscriptions on the walls. After exploring the temple, walk past the horses grazing in the open fields leading to the other side of Tungabhadra. There’s another old temple here that offers nice shade for people to hide from the scorching sun while enjoying breezes from the river.

Climb up to monkey temple in North Hampi.

Climb a flight of 100 stairs barefoot to reach the monkey temple in the evening. Religious people visit the place to offer their prayers to Sri Hanuman, while nature-lovers go there for the magnificent views and the magical sunset.

Goa may be the original hippie land of India, but Hampi is not far behind. Backpackers all over the world come to Hampi and are bewitched by the slow-paced life of this historic land. The hippie island located in north Hampi is a small hamlet adorned with trees and farmlands. It is lined with Goa-style shacks and backpacker’s homestays. People live in these places for less than Rs. 200 per day to eat, shop, and create music. Many of the shacks feature live music shows in the evening.

The peculiar rocky landscape of Hampi is what inspired the artisans to carve the artistic masterpieces. It is the same landscape that calls for several adventure activities, like bouldering, rock climbing, and trekking in south Hampi. There is also a natural pool in north Hampi where people dive from the cliff and then swim.

Safari at the Daroji Bear Sanctuary


Hampi is a land of contrasts. It’s a land that attracts Hindu pilgrims as well as hippie backpackers. On one side you have the rather barren rocky landscape, while on the other you have dense forests. These forests are conserved as they are the natural habitat of the Indian sloth bear. Go on a self-drive safari in the Daroji Wildlife Sanctuary, climb the watchtower and spend hours with your binoculars looking for exotic wildlife—bear, peacocks, antelopes, and several species of birds, to name a few.

Where to Stay in Hampi


Central Hampi, which is close to the Royal Enclosures and key temples, is where families prefer to stay. You will find several good hotels there in different budget ranges. Clarke’s Inn is one of the best properties—it’s located opposite to the Archaeological Museum of Hampi. It’s a reasonably priced 3-star hotel with free WiFi, an indoor swimming pool, gym, and other facilities.

Backpackers prefer to stay in the homestays and hostels on Hippie Island.

How to Get to Hampi

The nearest international airport from Hampi is Bangalore, followed by Goa. Hampi is about 350 km from Bangalore—an easy 6-hour drive. You can also reach there by overnight train or bus.

Hampi is surprisingly cheap! Most of the main things to see and do here have no entrance fees at all. Only a few protected properties—the Vittala Temple, the Zenana Enclosure, and the Archaeological Museum—require tickets.

There is just a single ticket that you can purchase at any of these three places, which is valid for one full day. The Daroji Wildlife Sanctuary entry price is comparatively expensive, but it can be skipped on a short trip. Food is excellent and cheap too.

Here’s a cost breakdown for a 3-day trip, besides the diesel costs:

Hampi is generally very hot and receives little rainfall. Since one side of it is quite barren, the heat of the sun is very strong throughout the day. Therefore, the best time to visit Hampi is during the monsoon. In fact, it is one of the best places to visit during monsoon in India. The light showers from July to September cool down the earth and make the weather pleasant. Winter is also a good time to visit the Group of Monuments at Hampi, but the scorching heat of the sun will follow you most of the day. Winter evenings, however, are nice.

Sinjana thought she achieved her dream when she made it to the prestigious IIT, and later got a job at the world’s most valuable company. But she really found happiness at work when she started penning down her travel stories. She blogs at Backpack & Explore to share the joy of traveling with all working professionals like hers. Backpack & Explore is a repository of her knowledge, stories and practical tips for time-poor travelers. A blog through which she wants to inspire people to make time for travel. 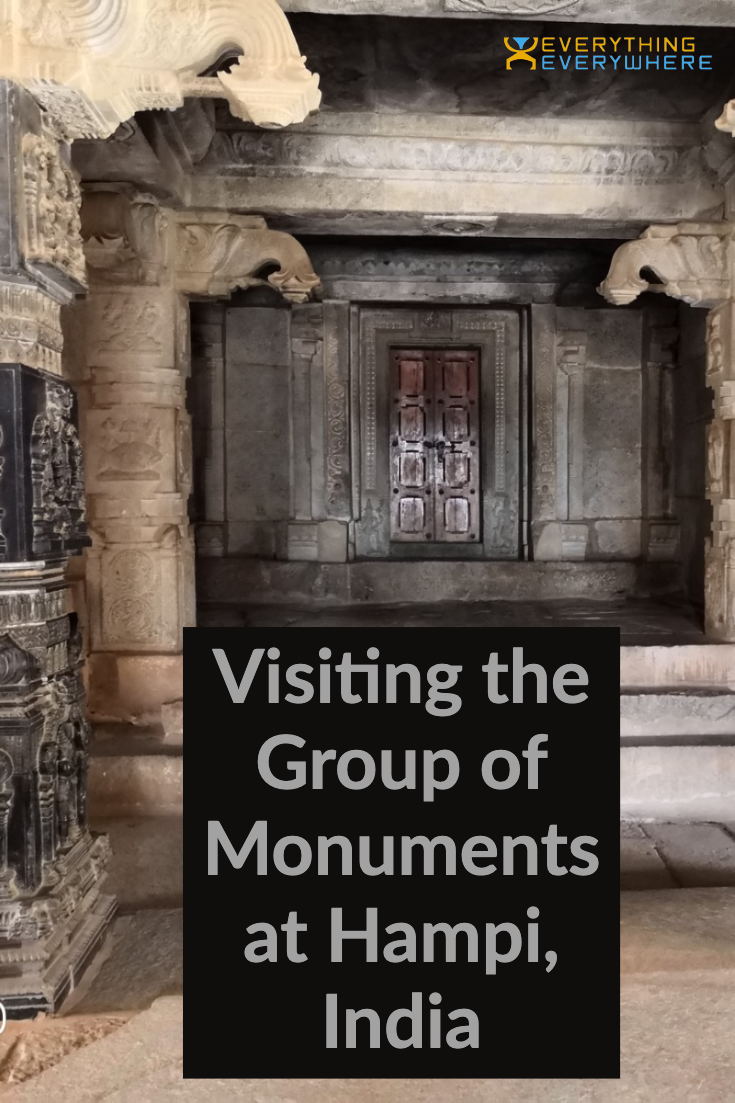