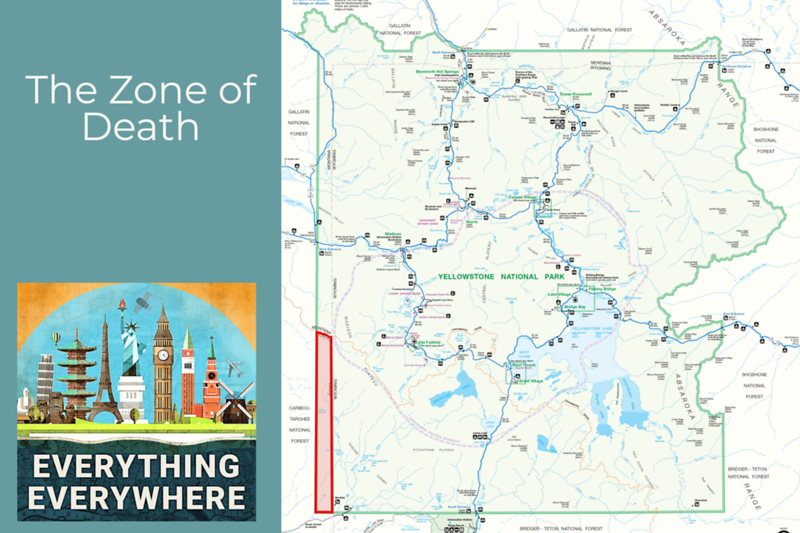 What if I told you there is a place within the borders of the United States where, theoretically, you could get away with murder scot-free?

No matter what you did, a jury of your peer wouldn’t convict you because you could never convene a jury.

According to at least one legal scholar, such a place does exist, and it is due to a loophole in the US Constitution.

Learn more about the zone of death and the theoretical place where you could get away with murder on this episode of Everything Everywhere Daily.

Before I begin, let me start by saying I’m not a lawyer, and this argument is very nuanced and theoretical. However, it is also pretty straightforward and easy to understand.

This began back in 2005 when a Michigan State law professor by the name of Brian Kalt was researching the sixth amendment. He made a discovery that became the basis for an article in the Georgetown Law Review titled “The Perfect Crime.”

Everything I’ll be going through in this episode originated with his discovery and his article.

So, how can you murder someone and get away with it?

It starts with the US Constitution, in particular the Sixth Amendment.

It is short enough, so let me read the parts of the amendment which are relevant to this episode:

In all criminal prosecutions, the accused shall enjoy the right to a speedy and public trial, by an impartial jury of the State and district wherein the crime shall have been committed, which district shall have been previously ascertained by law…

The key takeaway is that everyone who is accused of a crime is entitled to a trial by jury, and the jury must consist of people who live in the state and district where the crime took place.

That last part is the important part. The jury must live in the state and district where the crime was committed.

The next part has to do with the federal judicial districts in the United States.

The United States is divided into 94 Federal Judicial Districts. Larger states like California might have multiple districts, and small states might just have a single district.

Federal Judicial Districts lie wholly within the boundaries of a single state. Hence, getting a jury of people who live in both the district and state where a crime took place really isn’t a problem.

However, there is one exception to this rule. The Wyoming Federal District Court.

The Wyoming Federal District was established in 1890 when Wyoming became a state. As with every other federal district, it covered the same area as the state of Wyoming.

However, it was also specified to cover the entirety of Yellowstone National Park. Yellowstone was established as a national park in 1872, eighteen years before Wyoming became a state.

This is where the next part of the puzzle comes in.

96 percent of Yellowstone National Park is located in the state of Wyoming, which is why the park was placed in the Wyoming Federal District.

These bits of Yellowstone Park in Montana and Idaho are the only parts of the United States which are in a Federal District, which is not part of the state in which it is located.

Because Yellowstone is federal land and is covered by an 1894 law, any crimes committed within a park are considered federal crimes, not state crimes. The states of Wyoming, Montana, and Idaho have no jurisdiction within the park.

Now, let’s go back to the 6th Amendment, which states that you have to jury from both the state and district where the crime was committed.

In the case of Montana, there is a very small population that lives inside the park and Montana. The population is estimated to be around 26 people. Not many, but enough to form a jury.

However, in the small sliver of Yellowstone in Idaho, it is a different story. Literally, no one lives there. It is total wilderness. Population zero. No buildings, no settlements, no roads.

In fact, it is so remote that it also hardly gets any tourists as the only way to get there is by backcountry hiking.

The fact that there are no people who live there is where the problem arises.

If a crime were to be committed in the 50 square miles of the Idaho section of Yellowstone National Park, according to the 6th Amendment, the jury would have to consist of people who live in both the Wyoming Federal District and the State of Idaho.

The problem is no one lives in both of those places. It would literally be impossible to assemble a jury that meets the constitutional requirements.

As everyone has the right to a jury trial, it would be impossible to convict someone who committed a crime in this area.

Hence the name the Zone of Death because you could technically get away with murder.

If this sound ridiculous, this is the logical conclusion from a literal interpretation of the constitution.

As of this recording, this has never been a case that has taken place in this area.

There was a case of a poacher who illegally shot an animal in the Montana section of the park.

He tried to use argument in his defense, but the judge simply dismissed the argument out of hand.

There was an actual high-profile murder case where the Zone of Death was suspected of being involved, the murder of 21-year-old Gabby Petito.

She was driving across the country with her fiance when she disappeared just south of Yellowstone near Grand Teton National Park.  Her last known location was just a few miles away from the Zone of Death.

Many people speculated that her finance might have taken her to the Zone of Death to murder her because he had heard about the legal loophole.

Her body was later found in the Bridger–Teton National Forest. Physical evidence showed she was strangled to death, and her finance later confessed to the crime and killed himself, and it turned out to have nothing to do with the Zone of Death.

That being said, the Zone of Death has been a useful plot device for fiction writers.

In the TV series Yellowstone, there is a place they go to dump bodies that they call the “train station,” which is based on the Zone of Death. In the TV show, the zone is Wyoming, not Idaho.

There was a 2016 mocumentary called Population Zero, which is about a murder that takes place there.

There was also a novel called Free Fire which the plot revolves around murders that take place there.

Fictional murder mysteries aside, what are the real-world ramifications of this loophole?

The first is that crimes like murder and poaching are still illegal in the Zone of Death. It isn’t as if this part of the park is in a state of anarchy. It might be wilderness, but laws still exist.

In the event that an actual crime was committed, it is likely that the judge in the case would just find some way around it. They could declare that a jury from Wyoming or Idaho would suffice because there is no population in the Zone of Death.

However, rather than waiting for a court case to deal with the problem, it would actually be rather trivial to solve via legislation. All you have to do is declare that sections of the park that Idaho and Montana are in are part of the Idaho and Montana Federal District Courts instead of the Wyoming District.

That’s it. Because no one actually lives there, it wouldn’t really affect anything. It would just close the loophole, annoy some fiction writers, and remove the temptation for someone to try to commit an actual murder there.

The author of the original research paper, Brian Kalt, has tried lobbying congress to close the loophole, but nothing has happened.

Former Wyoming Senator Mike Enzi picked up the cause, but he was unable to get anyone in Congress to get behind it.

The Gabby Petito murder has raised the attention of the loophole to more members of congress from Idaho, but they, too, haven’t been able to get the other members of Congress to take action.

It seems unlikely that Congress will have any incentive to do anything until something actually happens….or someone member of Congress just might sneak it in as an amendment to some 2000-page omnibus bill.

Either way, even if no crime is ever committed and a case never comes to court, the Zone of Death loophole is another example of unintended consequences.

The idea of putting all of Yellowstone Park under the same jurisdiction wasn’t a bad idea, but it just didn’t jibe with the letter of the constitution.

So, until the loophole gets close, please don’t get any bright ideas and try to commit any federal crimes in the wilderness of Idaho.

Today’s review comes from listener Dan Last over on the Facebook group. He writes:

I found this show in mid-2022 and this podcast is so good that I plan to join the completionist club in 2023. I listen to the show while running and when I wrote out my 2023 goals, I planned to run 1,000 kilometers this year. I have calculated that if I listen to the old episodes consistently, I’ll reach my goal right as we hit 1,000 episodes. Here is to a new year and our own upcoming millennium!

(And if Gary reads this review, my friend Christin owes me a cappuccino)

Thanks, Dan! I wish you luck on your goal of running 1,000 kilometers and I’m glad to be accompanying you on your runs.

As for your friend Christin, I hope they have money on their Starbucks card because he owes you a cappuccino….and Christin, make it a double cappuccino.