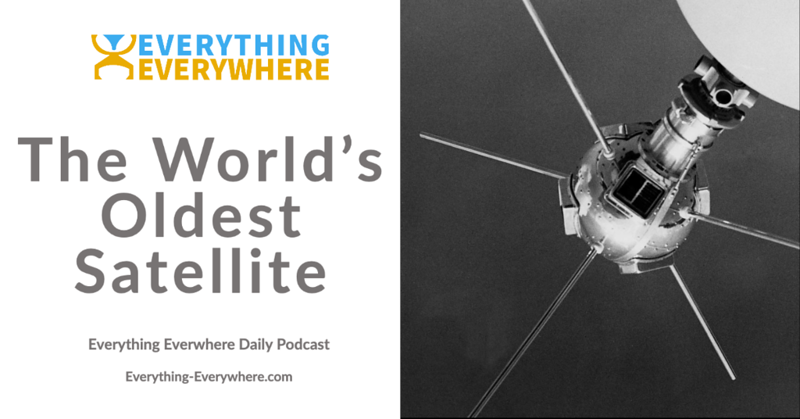 Here is a question you’ve probably never bothered to think about before….What is the oldest man made object orbiting the earth? Which, if any, of the really early satellites are still whizzing around up in space?

It turns out, the fourth satellite ever put in orbit is still there, 62 years after it was launched.

Learn more about Vanguard 1, the world’s oldest satellite, on this episode of Everything Everywhere Daily.

If you are interested in the early space program, the audiobook I would recommend is American Moonshot: John F. Kennedy and the Great Space Race By Douglas Brinkley. Drawing on new primary source material and major interviews with many of the surviving figures who were key to America’s success, Brinkley brings this fascinating history to life as never before. American Moonshot is a portrait of the brilliant men and women who made this giant leap possible, the technology that enabled us to propel men beyond earth’s orbit to the moon and return them safely, and the geopolitical tensions that spurred Kennedy to commit himself fully to this audacious dream.

In the 1950s, the United States was riding high. They had won WWII, their economy was strong, unemployment was low, and they had this new fangled thing called television.

Then on October 4, 1957, everything changed. People woke up to discover that the Russians had put an artificial satellite named Sputnik, into orbit. It was a national punch to the gut. Not only was there national embarrassment, but there was also a great deal of concern. If the Russians could launch something into orbit, then they could drop a nuclear weapon pretty much anywhere on Earth.

Within a month, the Russians announced a second satellite, Sputnik 2, and this time they even had a dog on board named Laika (who by the way was on a one-way flight, because they never had any intention of bringing her back safely.)

The US had to do something and do something quick. On December 6, 1957, about 2 months after the Sputnik launch, the United States, with great fanfare, launched Vanguard 1A satellite…..which blew up in spectacular fashion on the launch pad.

Oddly enough, the satellite survived the explosion and was recovered. It is now at the National Air and Space Museum in Washington DC.

Next month, on January 31, 1958, the US finally got their ducks in a row and launched Explorer 1, which was the first American satellite, and third artificial satellite, ever to orbit the Earth.

Less than a week later, on February 5, the Americans tried to launch their second satellite…..and it failed.

Next month on March 5, they tried again for satellite number two…..and they failed.

So far, the US was batting. 250 in satellite launch attempts and they were inching close to the Mendoza line.

Vanguard 1 wasn’t much of a spacecraft. It was small enough to fit in the palm of your hand. Nikita Khrushchev mockingly called it a “grapefruit satellite”, and he had a point. It was about the size of a grapefruit.

It was a sphere encased in aluminum and it only weighed 3.2 lb or 1.47 kg. A mercury battery powered a 10 mW transmitter and six small solar cells were used to power a 5 mW transmitter. The satellite was the first one ever to be powered with solar cells.

The satellite was part of the International Geophysical Year, and the transmissions from the satellite were some of the first real science done from space. The data from Vanguard 1 offered the first evidence that the Earth isn’t a perfect sphere, but rather slightly asymmetric.

The signal from the battery only lasted 20 days, and the signal powered by the solar cells lasted a full 6 years.

The last signal received from the satellite was from a tracking station in Quito, Ecuador in May 1964.

There was a point to my listing all of the satellites which were launched before  Vanguard 1.

Vanguard 1, however, the fourth satellite ever put in orbit, is still there. It has never re-entered the atmosphere in the 62 years since it was launched, and given its orbit, it isn’t going to be coming back to Earth anytime soon.

This makes Vanguard 1, and its upper launch stage, the oldest man-made objects in orbit.

To date, it has completed almost a quarter-million orbits of the Earth and has traveled over 7 billion miles.

The original estimate of how long it would remain in orbit was 2,000 years. However, they didn’t anticipate the changes in the orbit due to the pressure from solar radiation and the drag from solar winds. It is now expected to be in orbit for another 200 years in a highly elliptical orbit.

Because of its historical significance, the question has to be raised, “could we salvage Vanguard 1?”

It currently isn’t hurting anything. While technically space junk, it is in an orbit which is well above most low Earth orbit satellites.

Capturing and bringing the satellite back is very possible, but it would cost money. A lot of money. If it is done, it would probably be to test the capabilities of a mission to medium Earth orbit and to rendezvous with something in such an elliptical orbit.

It would be an interesting project albeit a pricey one. The satellite is small, and there is probably a lot that could be learned from analyzing something which has been in space for so long.

That being said, there is no rush. We have 200 years to capture it before it burns up in the atmosphere and to find a place for it in a museum.