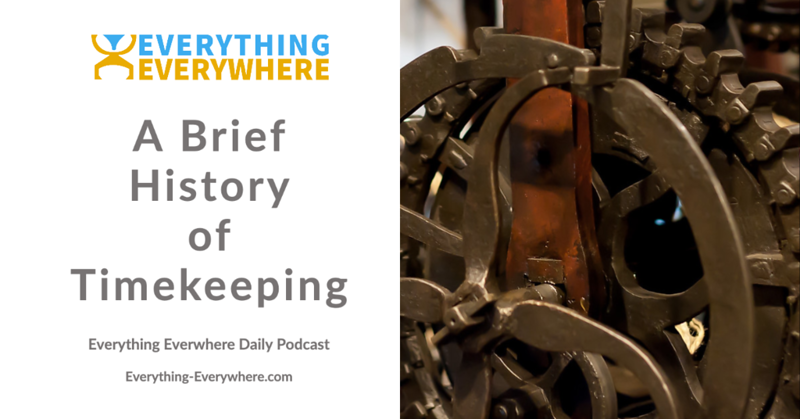 Our ability to measure time is one of the fundamental things which makes us human. We’ve gone from very crude and inexact measures of time to time measurements which are so accurate that it would take billions of years to lose a single second.

This increased accuracy has allowed us to navigate the seas, space, and even get directions to a nearby store.

Learn about the history of how we keep time on this episode of Everything Everywhere Daily.

If you are interested in how we keep time, the audiobook I’d recommend is Longitude: The True Story of a Lone Genius Who Solved the Greatest Scientific Problem of His Time by Dava Sobel. She tells the story of John Harrison, who developed the first highly accurate mechanical clocks which could be taken on ships to track positional longitude. Follows Harrison over several decades as he improved his clocks to win a £20,000 prize from the British Parliament.

Early humans didn’t have the need for accurate time measurement, nor did they care. Their schedules followed the sun and there was little which occurred during the day which required accurate coordination.

As agriculture developed and civilizations arose, the need for some sort of basic time organization arose with it.

The first real system of keeping time was the sundial. The oldest known sundial dates back to 1500 BC and was found in Egypt. The Egyptians are the ones who divided up the day into two 12 hour units.

Sundials were fine for what they were used for, but they had several obvious drawbacks. They were useless if the sun wasn’t out or at night.

Candles were often used to keep time at night. So long as the candles were made consistently out of the same material and were the same shape, you could get approximate time values for how long it took the candle to burn.  They solved many of the problems of sundials, but candles were consumed every time you used them. Candles also weren’t cheap to produce, so it wasn’t as if a time candle was being used in every home.

Gravity was also used to create timepieces. The first such device was known as a clepsydra in Ancient Greece, which was a water clock. It was a simple device which measured time by draining water. These have been found in most ancient civilizations.  Babylon, Egypt, and Persia all used water clocks, as did the ancient Chinese and Indian civilizations.

The water clock was the precursor to the sand dial or hourglass, with which most of you are still familiar with today. The hourglass used the same basic principals as a water clock, but with sand. Unlike a water clock, it didn’t require constant refilling, you could just turn it over. It was also less subject to changes in time with changes in temperature.

Hourglasses also had one major advantage over every other method of keeping time: they could be used at sea.

Sundials, candles, and gravity clocks were pretty much the choices for several thousand years. While they might be time keeping devices, none of them are really what we would consider a “clock” today.

The creation of a true clock with hands that could tell time didn’t come about until the invention of a device called an escapement. An escapement allows a gear to be moved to be moved periodically in discrete steps. This is literally what makes clocks tick. If you’ve ever seen the inner workings of a clock, you’ll notice a back and forth movement which allows a gear to rotate in increments. That is the escapement.

What escapements did was change timekeeping from something continuous like the burning of a candle, the flow of water, or the movement of the sun, to something repetitive and oscillatory.

There is early evidence of escapement type devices in Greece used in conjunction with water clocks and in the 8th century in China, where the water was replaced with mercury.

The real breakthrough was with the verge escapement, or the crown wheel escapement. These appeared in the 13th century, and it allowed the creation of totally mechanical clocks. They could take energy which came from gravity, like a pendulum or a falling weight, and turn it into steady rotational motion, which could then move the hands of a clock.

Cities in Europe began installing these clocks on towers so they could be seen by entire towns, and they became an immense point of civic pride. Many of these old tower clocks are still running today, with much of the original equipment.

Bern, Switzerland’s city clock is called the Zytglogge. I’ve been up in the clock tower twice and I’ve been able to see the original gears which run the clock. It is fascinating stuff.

With the crown wheel escapement, clocks started to show more information and became more complicated. Adding information such as the phases of the moon, or the day of the week, became known as complications, which is still what they are known as today, even on digital watches.

These complications would also include mechanical chimes and even automated events such as figures which would come out of hiding and run on a track, and short tunes which would be played on an organ.

While these clock towers looked like modern clocks, and in every sense they were, they weren’t very portable. You couldn’t put a clock in your pocket, and you certainly couldn’t use a gravity powered clock on a ship which was swaying back and forth.

The next big innovation was the creation of clocks that were powered by springs. Springs could store the energy to run a clock inside the clock itself. With an escapement, the energy in the spring would be released in increments, and it would only have to be wound periodically to put energy back in.

Springs began being used in the 15th century, but they really came into their own with the creation of the first truly portable clocks.

John Harrison is credited with the creation of the first portable clocks. He developed these clocks in order to win a prize of £20,000, or about $3,000,000 today, which was issued by the British Parliament to solve the problem of longitude.

Sailors had long been able to determine their latitude by using a sextant and the pole star. However, determining longitude proved to be extremely challenging. Harrison believed that if ships had an accurate clock which was set to the time in Greenwich, England. By then measuring when solar noon occurred wherever they might be, they could then determine the difference in time, and calculate how far away they were.

The trick was creating a clock that could work on a ship.

Harrison set to work creating a series of five clocks over forty years. Each clock improved on the one before it. Along the way he had to solve numerous technical problems, and many of his solutions became the foundations of modern clock making.

His fifth clock proved to be accurate to within ? of one second per day.

With these innovations, watches began to take off. The difference between a watch and a clock is how they are powered. Clocks technically are powered by gravity, whereas watches were powered by springs. Today, a clock is usually just a larger time keeping device which sits on a wall or on a shelf, whereas a watch is portable.

Harrison’s fifth clock looked like a giant pocket watch. Over time, they shrunk so that they could fit in a pocket.

Switzerland became a huge center for watch making in the 19th century. The town of La Chaux-de-Fonds, Switzerland became the center of the watch making universe. Individual artisans began making watches, which was something they could do in the winter when they weren’t running their farms. Eventually, an entire industry sprang up and now it dominates the local economy.

Today, most of the high end luxury mechanical watch brands are still located here. They have a great museum which shows the history of watch making and time keeping.

Wristwatches were first designed for women starting with the very first one given to Queen Elizabeth I. In the 19th century they became the accepted way for women to use a watch, whereas men were to use a pocket watch.

In the late 19th and early 20th century, wristwatches were adopted by the military so soldiers could easily check the time to coordinate maneuvers.

The next big leap in time keeping occurred with the creation of electronic clocks. In 1927 Bell Labs created the first electronic quartz clock.

Quartz is what is known as a piezoelectric material. That means if it is deformed, it can create a charge. The opposite is also true. If an electrical charge is applied to it, it will bend. It is this property of quartz which allows it to be used as a clock. A charge is applied to it, which causes it to oscillate, and the oscillations are what allow it to keep time.

Quartz clocks and watches became available to the public in the late 1960s and they had two massive advantages over mechanical watches. First, they were cheap to produce, and second, they were an order of magnitude more accurate than mechanical clocks.

The final advance in time keeping was first theorized by Lord Kelvin in the 19th century, but wasn’t practicable until the later half of the 20th century: atomic clocks.

Atomic clocks work on the principle that atoms have a resonance frequency. By counting the oscillations in the atom, we can keep time.

Atomic clocks are insanely accurate. We have even redefined the base unit of time, the second, to atomic standards. The official definition of a second is now the “time that elapses during 9,192,631,770 cycles of the radiation produced by the transition between two levels of the cesium 133 atom”.

The keeper of time in the United States is the National Institute for Standards and Technology. They keep the official clock from which everything is based on.

They run a radio station at call sign WWV which does nothing but give the time. Here is a very brief taste of what you can expect to hear on their station:

The NIST also runs a website as time.gov where you can check the accuracy of the time on your computer as well.

By far, the most important use of atomic time today is with GPS satellites. Every GPS satellite has an atomic clock on board. Time is actually how GPS works, but I’ll leave the details of that for another episode.

If GPS clocks were off by more than one millionth of a second, the accuracy of GPS would be off by more than half a mile. GPS clocks, due to their speed orbiting the Earth, have to compensate for time dilation due to relativity. If they didn’t make this compensation, the entire system would fail within a few hours.

While GPS is mostly used for determining location, its use as a universal clock for the whole Earth might be more valuable. It allows for everyone on the planet to be on the same page with respect to time. It allows stock trade to function properly online. Cell towers all have GPS receivers, not to determine their location, but to determine the time. Indirectly, the time on your phone was determined by an atomic clock.

Atomic clocks keep getting better and setting new records for accuracy. The current champion is a clock at the NIST which uses aluminum atoms. As of August 2019, they claimed the clock would only lose one second every 33 billion years….which is pretty good considering that the universe is only thought to be 13.7 billion years old.