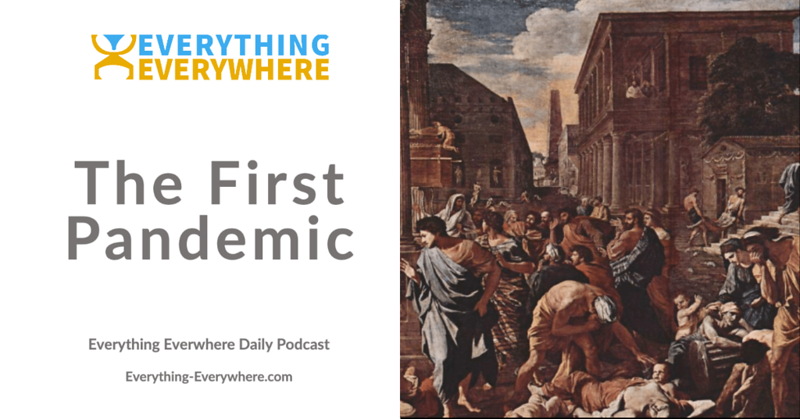 Pandemics can be world-changing events. The aftermath of a pandemic can shape societies and topple empires.

Whether it’s the flu, smallpox, cholera, or the bubonic plague, these pandemics have killed more people than all the wars in human history.

However, pandemics weren’t always a part of humanity. There was a first pandemic that caught civilization by surprise, and the legacy of that pandemic can still be felt in our world today.

Learn more about the Plague of Justinian, the world’s first true pandemic, on this episode of Everything Everywhere Daily.

If you want to do a deep dive into today’s topic, the audiobook I’d recommend is Justinian’s Flea: Plague, Empire, and the Birth of Europe by William Rosen. He gives the complete story of the pandemic named after one of Rome’s greatest emperors, which may have killed up to a quarter of the empire’s population.

To start this discussion, we should define the difference between a pandemic and an epidemic.

An epidemic is a localized outbreak of a disease. There have been several outbreaks of Ebola in Africa over the last several decades, and those would be defined as an epidemic. Epidemics are usually smaller scale and don’t go beyond a region, town, or sometimes even a school.

Pandemics, as the name would imply, are much wider in scale. A pandemic national or international in scale.

As humanity evolved, we never really suffered pandemics. We certainly suffered from communicable diseases, which for the longest time was the single biggest cause of death. As agriculture developed, humans suffered from more diseases, but the diseases couldn’t really spread.

It was only with the rise in technology and global trade that pandemics became possible. Hunter-gatherer societies and communities of farmers could have epidemics, but it would take the rise of an empire to create a pandemic.

The pandemic which we call the Plague of Justinian started in the year 541 CE. It almost certainly began earlier and spread at very low levels, but it was 541 when it was first recorded.

Most of what we know comes from the historian Procopius. He notes that the plague first appeared in the Egyptian port city of Pelusium which is near the modern city of Suez.

People in the city began reporting sudden onsets of fever and sweating. Most notably, they would report the development of large lumps in their lymph nodes. Some people would be dead within 24 hours of experiencing their first symptoms. Even though some survived, most who caught the illness didn’t survive more than five days.

This was the first great pandemic of the Yersinia pestis bacteria, otherwise known today as the bubonic plague.

For years, it wasn’t known what caused the Plague of Justinian, but recent research into the DNA of graves of plague victims found evidence of the bacteria. It wasn’t the same strain as the later Black Death in Europe, but it was closely related.

The disease is believed to have originated somewhere in Central Asia. It may have arrived in Africa via traders, and then traveled up the Nile River. There are reports of plague in what is today Sudan, Ethiopia, and Yemen from 541.

Once it got to Egypt, which was the breadbasket of the Empire, it was only a matter of time before it spread.

The main agent of transmission of the disease was rats. Rats normally never traveled very far, but they loved to eat grain and found homes on grain barges and in grain warehouses.

By 542 CE, the plague had arrived in the imperial capital of Constantinople. Rome/Byzantium had never seen anything like this. The plague swept through the city like wildfire with 5,000 to 10,000 people dying per day in Constantinople alone at its peak.

I’ll quote a passage Procopius here, because he does such a great job of describing life in the city:

Now the disease in Byzantium ran a course of four months, and its greatest virulence lasted about three. And at first the deaths were a little more than the normal, then the mortality rose still higher, and afterwards the tale of dead reached five thousand each day, and again it even came to ten thousand and still more than that. Now in the beginning each man attended to the burial of the dead of his own house, and these they threw even into the tombs of others, either escaping detection or using violence; but afterwards confusion and disorder everywhere became complete. For slaves remained destitute of masters, and men who in former times were very prosperous were deprived of the service of their domestics who were either sick or dead, and many houses became completely destitute of human inhabitants. For this reason it came about that some of the notable men of the city because of the universal destitution remained unburied for many days.

(This is where I’ll remind you to please go back and listen to episode 1 if where I explain how the Byzantine Empire was really just the Roman Empire by another name.)

The grain shipments spread the rats to port cities all over the Mediterranean. From the port cities, the disease spread inland wiping out the population wherever it went.

All of this was happening at a really bad time for the empire. The Emperor Justinian, for whom the plague is named, had been fighting expensive wars to bring Italy back into the Empire. He was successful, but at a great cost. He was also one of the great builders in history, having built the great Hagia Sophia, which also cost a lot of money.

On top of all that, the world was going through a climate change called the Little Ice Age. The peak of the Roman Empire coincided with a very temperate period known as the Roman Climatic Optimum. This period from 250 BCE to 400 CE was a particularly good time for growing crops, and as it turns out, empires.

By the time of Justinian, temperatures had dropped and so did farm yields.

As the plague, wars, and climate change were all happening, Justinian never yielded on collecting taxes to pay for his projects, not even excusing tax payment from people who died.

Farms were abandoned because of the taxes, climate, and lack of bodies to work the fields. Food prices skyrocketed because of the collapse of agriculture. This, of course, led to famine 542 and 543.

The plague spread as far as Ireland where it was known as the Plague of Mohill.

While the worst of the plague was over in about four months in Constantinople, it spread for about eight years total where it was a serious concern in the empire. However, the plague kept popping up for over 200 years, and collectively this period was known as the First plague pandemic. The second being the Black Death, and the third being an outbreak in China in the 19th Century.

The Plague of Justinian had a profound and lasting effect on world history.

For starters, it effectively ended Rome/Byzantium as a major power.

Justinian was the last ruler of a united eastern and western Roman empire. Because of the collapse in population, taxation, and food production, they couldn’t support a large military. They eventually lost the Italian peninsula and areas of North Africa to the Goths and Vandals. They lost a war with the Persians in the East, which forced them to pay a massive annual tribute.

The Empire remained weakened for decades, which left them susceptible to the new religious and military force known as Islam which came out of the deserts of the Arabian Peninsula.

But for the plague, a new unified Roman empire might have reemerged.

In the end, an estimated 25% of the population in the eastern Mediterranean region died, with an estimated death total as 100 million people. As much as 10% of the entire human population may have perished.

Most people are surprised to learn that the bubonic plague is still with us today. There are a few cases almost every year that pop up in the western United States. The other major centers of the disease are in Africa, particularly the Democratic Republic of Congo, and Madagascar.

The disease is still spread by rodents which is why it is still hasn’t been eradicated. However, we have a much better understanding of the disease now, and it can easily be identified and treated.

That is why the bubonic plague no longer spreads into pandemics.