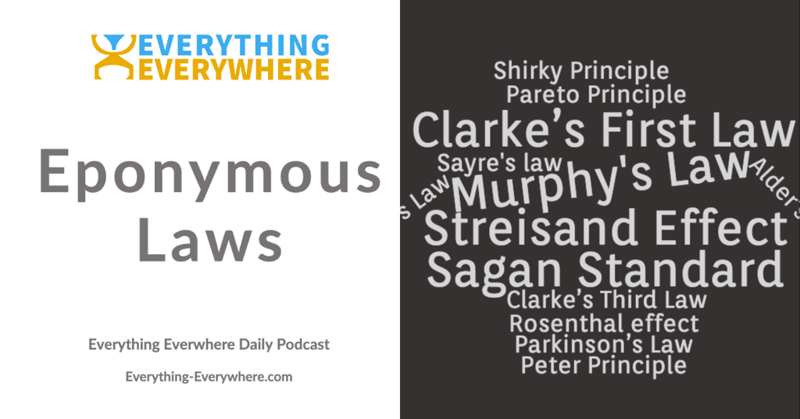 Everyone is probably familiar with Murphy’s Law which says that “Anything which can go wrong will go wrong.” However, there are many such laws, known as eponymous laws, which are sayings, adages, or truisms, which have been attributed to people over the years.

These are not hard and fast mathematical or physical laws, but rather are general truths which can help you see and understand the world better…and they are usually named after someone.

Get to know the world of eponymous laws on this episode of Everything Everywhere Daily.

If you are interested in the snippets of wisdom from great minds, the audiobook I’d recommend is 600 Quotes of Ancient Philosophy. It contains thoughts from such minds as Confucious, Plato, Aristotle, Marcus Aurelius, and the Buddha. If you are new to ancient history or philosophy, it is a great way to get introduced.

There are many truisms that we all know which are less than mathematical or scientific laws but are still helpful rules for living life.

These often are referred to as laws, razors, dictums, or rules.

The most famous of course is Murphy’s Law which holds that anything which can go wrong, will go wrong.

The law is attributed to a man named Edward Murphy who was an American aerospace engineer. The earliest known use of the phrase was in 1951 and it was attributed to Murphy by Dr. John Stapp who was an Air Force flight surgeon. The phrase became really popular with the development of the space program.

Oddly enough, most people use it incorrectly. They assume it is just a pessimistic outlook on life when it reality it was supposed to be an approach to engineering. An engineer should assume that anything which can go wrong, eventually will, and plan for that eventuality.

Of course, there is evidence that Murphy didn’t in fact invent the law, of which some form has been around in engineering circles since the last 19th century.

The misattribution of laws is in itself a law, known as Stigler’s law, which says  “No scientific discovery is named after its original discoverer.”  This law is attributed to statistician Stephen Stigler, who claims that he didn’t think of it, but rather it should be attributed to sociologist Robert K. Merton.

This misattribution really just adds support for the validity of the law.

One of the oldest known attributed laws is Occam’s Razor, which is attributed to the 14th century English monk William of Ockham. It dictates that “all things being equal, the simplest explanation is most likely the right one”.

This can be applied to many things, but especially something like a grand world-dominating conspiracy which would require millions of conspirators and trillions of dollars per year to explain something as simple as the Earth being round.

Alder’s Razor is attributed to mathematician Mike Adler who came up with the dictum which we should all probably take to heart. It says “What cannot be settled by experiment is not worth debating”. It is incredible how much time is spent by people arguing about things that can never be conclusively resolved. This is also known as Newton’s Flaming Laser Sword,  which is to give it a bit more oomph than just a normal razor.

Sayre’s law, which is attributed to political scientist Wallace Stanley Sayre, says “In any dispute the intensity of feeling is inversely proportional to the value of the stakes at issue.”  This law highlights the fact  that often times the most bitter fights are over the most trivial things. Academic departments often have heated battles, even though the stakes are so low. Likewise, many of the fiercest religious battles are fought, not between totally different religions, but between different sects or denominations within a religion.

Italian economist Vilfredo Pareto is credited with the Pareto Principle, which is also known as the 80/20 rule. This dictates that 20 percent of the inputs in any system are responsible for 80 percent of the outputs.

Professor and author Laurence J. Peter is credited with the Peter Principle which states, “In a hierarchy, every employee tends to rise to their level of incompetence.” We’ve probably all seen this in action. A good computer programmer is rewarded with a raise to a position where they have to manage other programmers, but their skill is in writing code, not managing people. Alternatively, a good teacher might be promoted to become an administrator, which requires a completely different set of skills than the ones which got them the job.

Parkinson’s Law comes from a 1955 essay by Cyril Northcote Parkinson in the Economist Magazine which notes that  “Work expands to fill the time available for its completion.” I know this myself almost every day when working on this podcast. No matter how much or little time I give myself to get a show out the door, I will use all of it.

The Shirky Principle was named after technology pundit Clay Shirky by Wired Magazine editor Kevin Kelly. It states that “Institutions will try to preserve the problem to which they are the solution.”  Many institutions are founded with the best intentions. Over time, they develop their own bureaucracy and institutional inertia, which seeks to protect its own existence, more than solving the problem they were originally created for.

Case in point, the Rural Electrification Administration which was created during the new deal to bring electricity to rural areas, still exists, even though the problem of rural electrification was solved decades ago.

The Rosenthal effect, also known as the Pygmalion effect dictates that  “Higher expectations lead to an increase in performance, or low expectations lead to a decrease in performance.” Psychologist Robert Rosenthal stipulated that expectations can become self-fulfilling prophecies. If you expect a student to get A’s, there is a good chance they will get As, and if you only expect a student to pass, they will do the minimum amount of work just to pass.

Science fiction author Arthur C. Clarke has three laws named after him, two of which are worth mentioning.

Clarke’s First Law states that ”When a distinguished but elderly scientist states that something is possible, they are almost certainly right. When they state that something is impossible, they are very probably wrong.” There is a conservatism in science whereby established scientists are wedded to the current framework and are resistant to new ideas. There are numerous examples of scientists who have said things are impossible but turned out not to be.

I can distinctly remember some scientists saying that you couldn’t transmit digital information over analog radio waves. If you are listing to me now, it is proof that they were wrong.

Clarke’s Third Law states,  “Any sufficiently advanced technology is indistinguishable from magic.” We’ve probably all experienced this ourselves if we can think back to the first time we saw a GPS device or a smartphone. We had no idea how it worked, we were just amazed that it did.

Goodhart’s Law is attributed to British economist Charles Goodhart and it noted that “When a measure becomes a target, it ceases to be a good measure.” This is seen when you teach for a particular standardized test. The SAT was designed as a general measure of aptitude, but now it is just a measure of how good you are at taking the SAT.

The Streisand Effect was named after Barbara Streisand. It states that “Any attempt to hide, remove, or censor a piece of information has the unintended consequence of publicizing the information more widely.” This came about when she attempted to suppress aerial photos of her home in Malibu, which only ensured that the photos were widely spread during the ensuing controversy.

Astronomer Carl Sagan had the Sagan Standard named after him, which simply states that “Extraordinary claims require extraordinary evidence.” This is often used against people who claim there are aliens who have visited Earth, without any real hard evidence to back up their claims.

Our final law is my personal favorite: Stein’s Law. It was set down in 1976 by economist Herbert Stein. In its simplest form it notes that “if something can’t go on forever, it won’t.” Back in the 90s, the dot com bubble was inflating the price of stocks and everyone knew that the values weren’t sustainable….and they were right. The prices couldn’t stay inflated forever, and they didn’t.