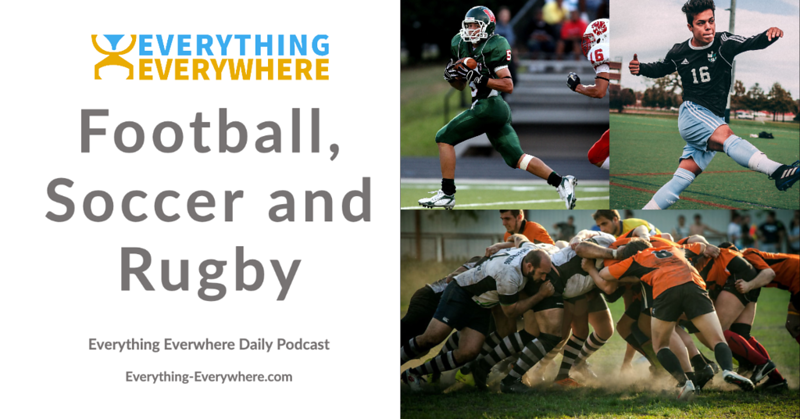 While different countries may debate as to what sport should really be called ‘football’, the reality is that the word football describes a broad family of sports all of whom have a very similar background and origin.

Learn more about the various sports we call ‘football’ on this episode of Everything Everywhere Daily.

If you are interested in the intersection of sports and society, my recommended audiobook is The Age of Football Soccer and the 21st Century by David Goldblatt.

he Age of Football explores soccer’s vital role in our social, political, and economic lives: its connections to social discord in the Middle East and political division in Europe and the reasons behind its surprising surge in popularity in China, India, and the United States.

Football, generally speaking, is a broad category of games which have most of the following aspects:

It is a team sport, played with a ball, on a field, where the objective is to get into an opponent’s goal, with the other team defending it.

This would include sports such as association football (or soccer), rugby union, rugby league, American football, Canadian football, Australian football, and Gaelic football.

Games with balls date back as long as recorded history. Humans have been playing ball games since we could make balls.

The oldest known ancestor of football is the Chinese game of cuju, which has been dated back to the 2nd and 3rd centuries BCE. The ancient Greeks had a game called Episkyros, and the Romans had a game that was based on the Greek game called harpastum. All of these have been mentioned in texts.

As far as we know, all of these games developed independently or must have an incredibly ancient history, such that as humans brought the game with them as they migrated between continents.

Here I should make note of the origin of the word football. Contrary to what most people think, football was not named after kicking a ball with your foot. We know this because many of the earliest references to football also make reference to carrying a ball.

Football originally referred to games which were played on foot, as opposed to on horseback. Games like polo also have an ancient history, and horseback competitions were the preferred choice of the nobility, whereas peasants and lower-class people tended to play games on foot.

There are many references to football and various ball games throughout the Middle Ages in many different countries.

What most of these mentions of football have in common is a total lack of detail about the game, its rules, and how it was played.

Most likely, there were no universal rules. Each town probably had its own variations on the rules, and even the objectives could have varied widely. What we do know is that while kicking was usually a part of the game and usually allowed, football did not mean a game that was only kicking.

It would be more accurate to call these early games proto-rugbies.

The various games that fall under the football family all had their formal start in the 19th century.

In England, private boys’ schools and universities all had their own games. Several schools such as Eaton, Harrow, and Winchester still have their own football games today with their own rules which are played on campus.

In the mid-19th century, there was a movement to codify the rules of these various games.

The sport we now call Association Football, or soccer, had its beginning with the Cambridge Rules. These were a series of rules established throughout the 19th century that attempted to create a code for teams from other schools to play with an agreed-upon set of rules.

Around the same time, the game where players could carry the ball was developing its own set of rules.

Whereas Cambridge developed the first rules for what became Association Football, the rules of rugby football came from the Rugby School, where the sport gets its name. It set down the first set of rules in 1845. At the creation of the Football Association in 1863, the Blackheath team split over a disagreement about carrying the ball, which cemented the split between the two games. Finally, in 1870, the Rugby Union was formed which was the first formal league.

Of all the modern sports which calls themselves football, rugby is probably the closest to the pre-19th century game which was called football.

Both rugby football and association football were known as football in the late 19th century. Association Football was shortened to assoc, and given the way of speaking at the time, ruby was colloquially called rugger, and assoc was called assoccer, which was later shortened to soccer.

Soccer is still what the game is called today in the United States, Canada, Australia, New Zealand, South Africa, and much of the Pacific. Yes, the term actually has a British origin, even though it is almost exclusively used outside the country now.

In the mid-19th century as rules for the various football games were being set in England, the same thing was happening in Australia and the United States.

In 1858, an Australian named Tom Wills, who attended the Rugby School, laid down a set of rules for what would become Australian Football. Over time it developed its own unique ball, field, and rule sets. Oddly enough, even though its called Australian Football, it is most popular in southern Australia.

Australian Football is played on an oval because it was designed to be played in the cricket off-season, and it is the only type of football which still has hand-passing. Hand passing is where bump the ball with one hand while being held with the other, instead of throwing it.

Over in North America, at roughly the same time, universities in the east were developing their own football games. The competitions between schools in the 1850s were usually just violent mob games, which caused the schools to ban them in the early 1860s.

Harvard eventually went along with McGill in playing rugby and encouraged other American universities to do the same. In 1876, the schoosl of what is today the Ivy League adopted the Rugby Union rules.

In 1880, Yale coach Walter Camp began changing the rules and making major innovations in the game, which would become the basis for American Football. This included getting rid of the scrummage, and replacing it with the line of scrimmage, and creating a system of downs, or attempts to advance the ball.

It wasn’t until 1906 when the forward pass was made legal. There are still a bunch of leftover rules from rugby which are still on the books in American Football today but are almost never used. Most notably the dropkick and the lateral or backward pass.

Just after the turn of the century, the Burnside rules were established which set the groundwork for Canadian Football. It was mostly based on the American Football rules, but with their own innovations.

Over in Ireland in the late 19th century, rugby was gaining popularity. To preserve their traditional games, the rules for Gaelic football were established. Gaelic football is closely related to Australian Football. In fact, the two associations created a third variant called International Rules Football, which combines the two rule sets, so the two leagues can play against each other.

So as you can see, even though these sports which were founded on totally separate continents, all seem different, they all are descended from the same proto-football game and they all can call themselves “football”.