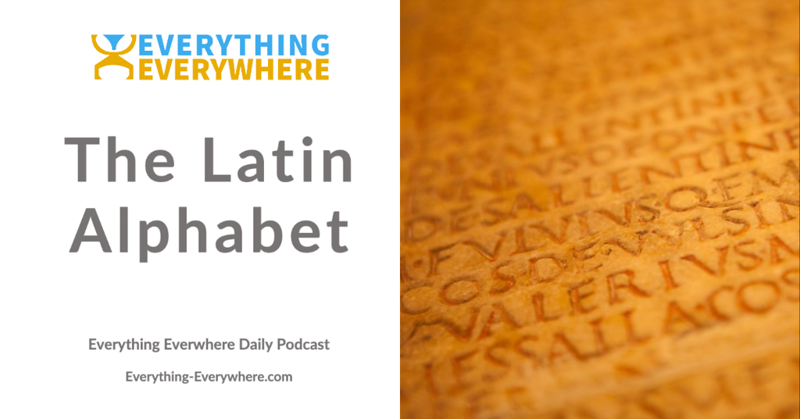 The Latin Alphabet has become the most widespread system of writing in the world. Its origins can be traced back thousands of years to Ancient Romans and to civilizations before that. It is probably the single biggest thing that we use today which originated in Rome.

Today’s English alphabet, you know that one from the song, is a modification of the system which was used by the Romans, which has had some unique quirks in the past that most English speakers are unaware of.

Learn more about the ABC’s of the ABC’s on this episode of Everything Everywhere Daily.

If you are interested in the origins of language, especially the English language, the audiobook I would recommend is The Adventure of English The Biography of a Language,  by Melvyn Bragg. The book explains how a minor Germanic language wound up becoming a major world language due to political and economic events in world history.

The modern English alphabet has 26 characters. However, the ancient Roman alphabet had only 23 characters. The letters J, U, and W, are all relatively recent additions.

After the fall of the Roman Empire, the Catholic Church became the guardians of the Latin Language, and in 1978 they added the letter J to the Latin Alphabet. In 1978 John Paul II was elected pope, and he insisted that his Papal name in Latin be spelled with a J. Normally it would be spelled Ioannes, with an I, which is how his immediate predecessor, John Paul I, spelled it. Just like that, via a Papal decree, the letter J was added to the Latin language.

The English alphabet is unique in that it is one of the only European languages which uses the Latin Alphabet but doesn’t have any diacritical marks. Whereas other languages will have some letters with dots, lines, and slashes above them to clarify how they are pronounced, English is totally lacking in them, even though it probably needs them more than other languages do because we’ve stolen so many words.

There used to be more than 26 letters in the English language. Many of them were abandoned over time, or they were just dropped as letters and used as other symbols.

The best example is the letter Thorn (Þ, þ). Thorn originally looked like the letter P flown at half staff. The round part was in the middle and not at the top. Over time, the way Thorn was drawn began to morph, and eventually, people replaced it with the letter it started to look like, the letter Y.

Thorn is still used in Icelandic and it makes the same sound. If you look in the show notes for today’s episode, I have the Thorn character listed because it exists in ASCII computer characters.

Another letter which didn’t make the cut is one you are probably familiar with:  Ampersand. Several hundred years ago, and even as late as the 19th Century, the ampersand was considered the 27th letter of the alphabet by many English speakers.

The character wasn’t originally called ampersand. It was just called “and” or “et” and it meant the same thing it does today.

It got the name ampersand because when you read off the alphabet, at the end you would say: “w, x, y, z, and, per se, and.”  The “per se” part just means it was by its self.

The phrase “and per se and” eventually got merged into “ampersand”.

Another letter you might have seen is the long S. ?  The long S was pronounced like the letter S, and it looked like the integral symbol from mathematics or like a lowercase f without a cross through it.

It existed alongside the S we know today, but with a host of rules for when it should be used. It was eventually abandoned in the 19th century because it served no real purpose as it was redundant with the normal s.

Most of the early countries which adopted the Latin Alphabet did so because they were Christian, and the early church used Latin. That was how non-romance languages like German and Polish came to use the characters.

Many countries have gone out of their way to switch to the Latin Alphabet. In some ways, the Latin Alphabet is like the metric system. It has become a universal standard. Countries that don’t use it have a large incentive to either convert to it or to use it alongside their native alphabet.

In Turkey, after WWI and the fall of the Ottoman Empire, Mustafa Kemal Atatürk moved Turkey to the Latin Alphabet, with 29 characters.

Over the last 300 years, there have been attempts to Latinize the Russian language by intellectuals. After the Communist revolution in 1917, there was a serious attempt to switch all of the languages inside the Soviet Union to the Latin Alphabet. They had actually made large strides for many of the languages until Stalin came to power who put the kibosh on the entire Latinization movement.

This didn’t stop several countries from making the change after the Soviet Union fell.

Uzbekistan officially converted to Latin from Cyrillic in the early 90s and has been transitioning ever since. Being a Turkik based language, they were able to piggyback off of efforts made by Turkey earlier in the 20th Century.

In 2007, Kazakhstan announced they were going to phase in Latin letters over a 10-15 year period.

Likewise, Turkmenistan, Kyrgyzstan, and Tajikistan have all announced plans to move from Cyrillic to Latin.

Many countries have not officially switched, but Latin is commonly

used alongside other writing systems. In Serbia, Cyrillic is official, but Latin characters can be seen all over.

Likewise, Bulgaria has been debating a switch but hasn’t officially done anything yet. Nonetheless, you can find Latin characters in common usage.

China has also officially adopted a use of the Latin Alphabet. They created an official transliteration system called Hanyu Pinyin, which is a formal way to write Chinese words in Latin characters.

Pinyin was why the city of Peking was changed to Beijing. Pinyin has been experimented with some schools in China as the first system for teaching children how to read because it can be taught phonetically.

Once you know a few characters you can figure out every word. Literacy in Chinese often means knowing how to write at least 1,500 different characters.

The Latin Alphabet seems here to stay, and with the characters hard coded into our computers, it is likely that this will likely remain the case for centuries to come.

Over on Patreon.com, supporters of the show were just treated to a 20 min special podcast where I give the backstory behind the creation of the show, as well as my process for recording and how I select topics for episodes.

If you would like to listen to this special show and more upcoming special content, go patreon.com/EverythingEverwhere to become a supporter, where you can also get show merchandise like stickers, t-shirts and hoodies.