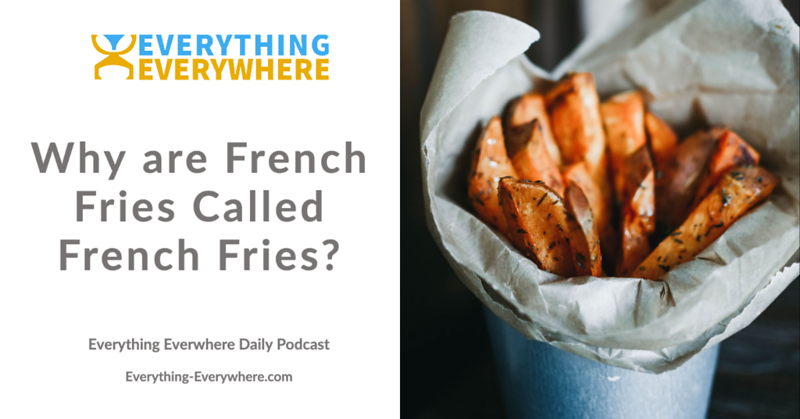 Everyone loves french fries. It is one of the few things which most people can agree on in the world today.

The average American consumes over 16 pounds of them every year, and they have become a staple part of the cuisine in countries all over the world.

Yet, why do American’s call them “french” fries? What do the French have to do with it?

Learn more about this history of this ubiquitous food, and learn what the French did or did not have to do with it, on this episode of Everything Everywhere Daily.

If you are interested in the history of what we eat and how it came to be that way, the book I’d recommend is Consider the Fork: A History of How We Cook and Eat by Bee Wilson.

In it she goes into detail about how the technologies in the kitchen have shaped how and what we eat. Everything from the 20,000-year-old mortar and pestle to the microwave oven.

You can get a free one month trial to Audible and 2 free audiobooks by going to audibletrial.com/EverythingEverywhere or by clicking on the link in the show notes.

The potato originated in South America where the people there have been cultivating it for thousands of years.

It was first brought to Europe by the Spanish in the late 1500s where they found it to grow quite well. Fun Fact: The monastery garden in Guadalupe, Spain was the first place outside of the Americas where potatoes were grown. Potatoes were probably brought there because it was where Queen Isabella was staying. I was told this when I took a tour of the monastery 2 years ago.

I’m not going to go into too much depth because believe it or not, the story of the potato is actually really important and it was responsible for much of the growth of Europe and I’m going to dedicate a whole episode to it.

The potato wasn’t accepted at first. Many people thought it caused diseases like leprosy, and it was mainly used to feed pigs.

The popularity of the potato was largely due to one man, Antoine-Augustin Parmentier.

During the Seven-Years War, he was captured by the Prussians and spent time in a Prussian jail where he was given potatoes to eat. He found them to be extremely edible and realized that the beliefs held about potatoes back in France were false.

Upon his release, he began heavily promoting potatoes. He did publicity stunts like holding potato themed banquets for the nobility and the king, and growing a potato patch and putting heavily-armed guards around it to make the crop seem more valuable. He then told the guards to accept any bribes from people who wanted to steal the potatoes and to turn a blind eye to anyone who snuck in, in the middle of the night to steal them.

By the French Revolution, potatoes were really taking off in France. There were street carts serving fried potatoes which became known as frites, which is what they are known as in French today.

We can pin down a date thanks to Thomas Jefferson who in 1802 had his chef, a Frenchman named Honoré Julien, prepare a menu for a White House state dinner with “potatoes served in the French manner”. They were described as “Potatoes deep-fried while raw, in small cuttings”.

That pretty close to describing french fries as we know them today.

However, while we can confidently pin down this 1802 date as a first instance of the words “french” and “fried” being used for potatoes, that doesn’t mean the idea originated in late 18th century France.

One popular version of the french fry origin story holds that in the late 17th century, in what is today the Meuse Valley in Belgium people regularly would fry small fish as one of their staple foods.

When there was no fish, they would cut potatoes up in trips to mimic the shape of a small fish, and they then fried those.

This technique, according to this version of the story, then spread to France when potatoes finally became a popular and acceptable food 100 years later.

This seems to be the best evidence of where the ideas of fried potatoes originated from. Somewhere in what is today France or Belgium, people began frying potatoes around the last 17th to the late 18th century.

But why do Americans call them French Fries?

There is no universally agreed-upon explanation, but there are several competing theories.

The first is what I mentioned above. Thomas Jefferson and others began cooking potatoes in the “french way”. This implies an early adoption of what was called the french technique which was deep frying.

The second explanation comes from Ireland. In old Irish, to french something, means to cut into small pieces. When the great Irish migration to the US occurred starting in 1845 due to the Irish Potato Famine, they brought with them to the United States the dish of frenched potatoes, which were fried. They then became french fries, the country of France has nothing to do with it.

The third explanation, and the one which is championed by the Belgians, is that in WWI, American soldiers were served the dish in Belgium where they are called Friets. Because the Belgians spoke French, the Americans called it French Friets, which got quickly Americanized into French Fries.

The WWI story, as endearing as it might be, almost certainly isn’t true. The first written occurrence was in 1856 in the book Cookery for Maids of All Work by British author Eliza Warren. There are also several other mentions of french-fried potatoes in the United States in the 1850s as well.

Americans also have a bunch of other words for fried potatoes. Thicker cut ones are called steak fries, which are closer to the British Chips. American fries are just fried chunks of potato. Of course there is also the self-described waffle and curly fries.

So if Americans call them french fries, why do the British call them chips? This is actually more straight forward. A cut piece of a fruit or vegetable was called a chip. Fried fish and fried chipped potatoes were separate dishes but eventually combined to make the staple known as fish and chips. The first known fish and chip shops were in London in the 1860s.

Fish and chips is undoubtedly the national dish of the United Kingdom. Oddly enough, fried potatoes have that distinction in several other countries as well.

In the United States a hamburger with french fries is pretty much as classic American cuisine as you can get.

In Canada, the national dish is poutine, which is really a dish that originated in Quebec, which is french fries covered in gravy and cheese curds.

Finally, Belgium has never given up the tradition. Plain old freits in a paper cone with mayonnaise is probably the most well-known food in the country. Belgium to this day has the highest per capita consumption of fried potatoes in the world.

While I’m on the subject, I should give a shout out to the potato chip, or what the British call crisps.

The American legend is that an African American chef, George Crum, from Saratoga Springs, New York invented them in 1853. According to the story, one of his customers was served fried potatoes and sent them back because they were too thick. Crum, angry at having to prepare another dish, this time cut them so thin they couldn’t be eaten with a fork. Surprisingly, they were a massive hit and were soon called Saratoga Chips. In some versions of the story, that customer was Cornelius Vanderbilt.

Sadly, this story too is probably apocryphal as there are mentions in cookbooks as early as 1822 which mention “Potatoes fried in Slices or Shavings”.

Whether you call them french friends, chips, or pomme friets, the fried potato has become one of the few staple dishes you can find in almost every country in the world today.