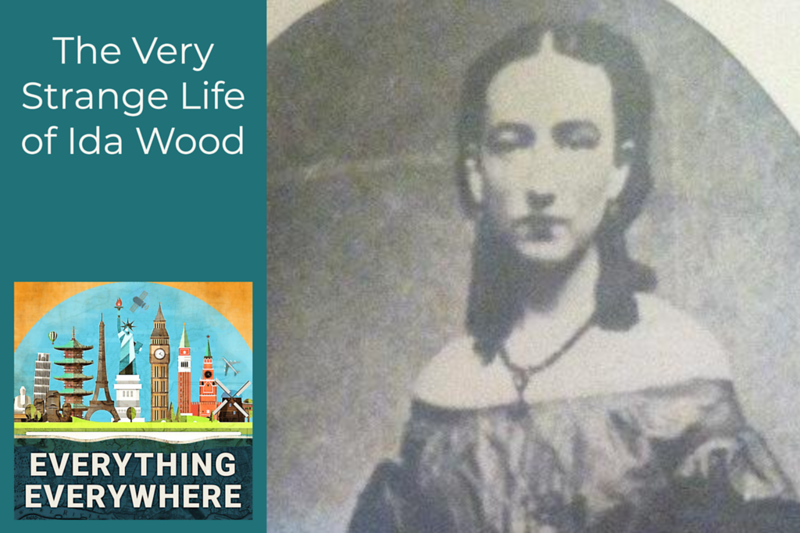 Ellen Walsh was born in 1838 in England.

She moved to the United States, changed her name, climbed the social ladder, and wound up an extremely wealthy woman.

In 1907, she abruptly disappeared from public life.

Then 25 years later, she appeared once again, and her life became tabloid fodder that shocked the world.

Learn more about Ida Wood and her very unique life on this episode of Everything Everywhere Daily.

The story of Ida Wood is sad and shocking, and when the story broke in 1932, it became scandalous.

It all starts with a young girl who was born on January 14, 1838, in the town of Oldham, England.  The woman who became known to the world as Ida Wood was actually born Ellen Walsh.

Her parents were Ann Crawford and Thomas Walsh. Her father was an Irish peddler who would travel and sell items from town to town.

Her family immigrated to the United States when she was young. They first landed in Massachuttes but moved around frequently. When Ellen’s father died in 1864, he was living in San Francisco.

It was in 1857, however, at the age of 19, that Ellen decided to take matters into her own hands to make a better life for herself.

She moved to New York City.

The first thing she did was change her name. She went from Ellen Walsh and became Ida Mayfield. She reinvented a new history for herself, claiming that she was the daughter of  Henry Mayfield, who owned a large Louisiana sugar plantation.

She poured over the New York society pages and gossip of the elite New Yorkers. During the course of her research, she frequently came across the name of one, Benjamin Wood.

Wood was the 37-year-old owner of the New York Daily News, which was a Democrat-leaning copperhead newspaper.

Ida set her sights on Benjamin Wood. The problem was she wasn’t in the social circles that Wood traveled in, and there was no real chance that she would ever meet him.

So, she did something which was rather audacious for women at the time. She wrote him a letter.  The letter was extremely forward. She wrote,

Having heard of you often, I venture to address you from hearing a young lady, one of your ‘former loves,’ speak of you. She says you are fond of ‘new faces.’ I fancy that as I am new in the city and in ‘affairs de coeur’ that I might contract an agreeable intimacy with you; of as long duration as you saw fit to have it. I believe that I am not extremely bad looking, nor disagreeable. Perhaps not quite as handsome as the lady with you at present, but I know a little more, and there is an old saying—‘Knowledge is power.’ If you would wish an interview address a letter to [a Broadway address] stating what time we may meet.

She basically just sent a cold email offering herself as a mistress.

Wood was married at the time to his second wife, so Ida became his mistress.  Being the mistress of Benjamin Wood catapulted her into elite society. She met both the Prince of Wales and Abraham Lincoln.

Ida was nothing if not patient. After ten years his mistress, his wife, died in 1867, and Ida became his third wife.

During this time, the political fortunes of Benjamin Wood rose. He was elected to the United States Congress twice, serving from 1861 to 1865, and elected to the New York State Senate.

While married to Ida, Benjamin was elected to congress again in 1881, and his newspaper grew to become one of the largest circulation newspapers in the United States.

Benjamin also had a serious gambling problem. Ida struck a deal with him that whenever he won, he had to split the winnings with her and if he lost, he had to absorb it himself. This system allowed her to save up a nest egg separate from her husband and protect the family’s wealth.

Ida, who was 18 years younger than her husband, was left with an enormous fortune. Her estimated net worth was around $2 million dollars, which in 1900 was a lot of money.  It would be worth well over $60 million dollars today in inflation-adjusted terms.

Ida was 62 years old and one of the richest women in America. She dabbled in running the newspaper for a bit, but in 1901 she sold it for around $300,000.  After she sold it, the newspaper faltered and was out of business in 1906.

The real story, however, doesn’t begin until 1907.

In 1907, showing great financial acumen, Ida Wood withdrew $1,000,000 in cash from her bank, anticipating the 1907 banking crisis, which hit in October of that year.

Then…..pretty much no one heard from them again.

The hotel staff was not allowed into the room, even to clean. No one in the hotel had any contact with the women for years. No one on the staff had seen the occupants of the room, yet they managed to pay their rent every month, on time, in cash.

In 1928, Ida’s sister Emma died at a hospital at the age of 71. No one in the hotel knew that it happened or that there was even a woman by that name living there.

The event that changed everything and brought this story to the world’s attention occurred in 1931.

An elderly half-naked woman rushed out of room 552, shouting, “My sister is sick. Get a doctor. I think she’s going to die!”

No one in the hotel had ever seen this woman before.

The unknown woman was Ida Wood. She was 93 years old, and it was the first time she had been out of her room in 25 years.

The woman was her younger sister Mary Mayfield, who had also changed her name to match Ida’s backstory. Mary was found dead.

When Ida opened the door to help her sister, she had let in the hotel staff, city officials, and, inadvertently, the entire world.

Everyone was shocked at what they found inside. Room 552 was filled with filth and garbage. There were stacks of old, yellowed newspapers. There were tons of empty boxes of crackers littering the suite.

Ida herself weighed only 93 pounds. She appeared not to have bathed in several years. However, she took care of the skin on her face, on which she applied petroleum jelly every day. The hundreds of empty jars also were evidence of this.

One of her attorneys, Morgan O’Brien, stated, “Her complexion in spite of her age, was as creamy and pink and unwrinkled as any I have ever seen. It was like tinted ivory, her profile was like a lovely cameo,”

She also smoked slender Cuban cigars and used snuff imported from Copenhagen, which was all over the suite.

What I’m describing would today be considered a classic case of hoarding. Such cases are sad but not unheard of.

There was something that made this case different, however. Interspersed with all the trash and garbage in her room was money. Lots of money.

They found uncashed dividend checks from stocks she owned. They found unclaimed gold certificates. There were boxes with expensive jewelry, including necklaces, bracelets, and a golden tiara.

As hard as she tried, word of what was discovered in Room 552 eventually made it to the press.

The newspapers were merciless. Headlines included

The fact that this story broke in the middle of the Great Depression made it all the more sensational.

It was just a matter of days before people began coming forward to try and claim Ida’s money.

A man named Otis Wood, who was the son of Ida’s brother-in-law and former Mayor of New York Fernando Wood, contacted an attorney and claimed that they wanted to help Ida.

He, his brothers, and all their children were represented by lawyers.

The children from Benjamin Wood’s previous wives also came forward, as did all of their relatives.

There were also claimants from her fictitious New Orleans family who came forward as well.

The one thing they agreed upon was that Ida should be declared incompetent…and so she was.

She was escorted by police to a room directly below where she had lived for a quarter century.

She wept as they took her away, as, despite her odd lifestyle, she did seem very competent.

From her new room, she would often shout from her window that she was being held prisoner.  Under this new state of affairs, over $3,000 were spent every month on doctors, lawyers, and other people for her supposed benefit.

The stress of all the publicity plus her advanced age took a toll. Ida Wood passed away on March 12, 1932, at the age of 94.

At the time of her death, there were 1,130 people who had laid a claim to her fortune.

The attorneys hired by all of the people who wanted her money began investigating her past. They discovered the truth that she wasn’t from a plantation-owning family in New Orleans but rather from an Irish family who migrated to the US.

The resulting court case to resolve her estate was called a “carnival of greed” by the New York Times. The court found that her estate would be divided between 10 living relatives in Ireland because Ida had no living descendants. Each person received over $90,000, which is over two million inflation-adjusted dollars.

The case of Ida Wood is one of the strangest cases of its type ever recorded. She was a social climber, a fraud, and ambitious. She was also a socialite, a shrewd businesswoman, and one of the wealthiest women in the world. Finally, she was a recluse, a hoarder, and a miser.

She ultimately just wanted to be left alone, but she died a celebrity with fame she never wanted.