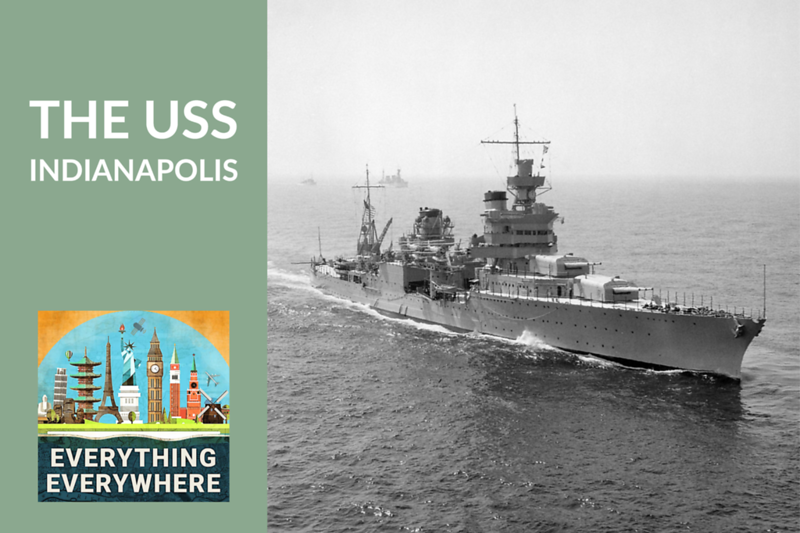 There were tens of millions of stories to come out of World War II. Many of them are tales of horrible human cruelty.

However, there is one particular story that is as horrific as any other, yet it doesn’t involve human barbarity, it involves nature. It was so horrific that it has been the subject of books and movies, and was one of the inspirations for the film Jaws.

It was perhaps the worst sea disaster in American naval history.

Learn more about the USS Indianapolis and the terrifying fate of its sailors, on this episode of Everything Everywhere Daily.

The USS Indianapolis was a Portland-class heavy cruiser that was launched in 1931.

During the bombing of Pearl Harbor, the Indianapolis was in the Pacific conducting a mock bombardment of Johnson Atoll, and it was immediately recruited into the hunt for the Japanese aircraft carriers that were responsible for the raid.

In 1942, the Indianapolis was assigned to Papua New Guinea where it served as an escort for American aircraft carriers, and later for escorts to Australia.

Later in 1942 and in 1943, it was assigned to the Aleutians Islands where it assisted in the islands hopping campaign to take the islands back.

In 1943, it returned to Hawaii for refitting and it was made the flagship of the 5th fleet. It was then involved in the island-hopping campaign in the Pacific taking part in most of the battles in the Pacific Campaign: Tarawa, Kwajalein, Palau, Saipan, all the way through to the Battle of Okinawa in 1945.

After serving with distinction throughout the war, it was in the summer of 1945 that this story takes place.

The USS Indianapolis was assigned a secret mission. On July 16, they left the naval base in San Francisco carrying the most important package of the war. Their departure was just hours after the Trinity explosion in New Mexico.

Their top-secret cargo was half world’s supply of enriched Uranium-235.

Their assignment was to deliver this to the island of Tinian, where it would be assembled as part of the atomic bomb known as Little Boy, which was dropped on Hiroshima.

It set a speed record arriving in Pearl Harbor on July 19th and then traveled unaccompanied, completely silent to the island of Tinian where it delivered its cargo on July 26th.

From there it went to Guam to swap out crew and to refuel. It left Guam headed to the island of Leyte in the Philippines for training.

However, the Indianapolis never arrived in Leyte.

At fifteen minutes after midnight, on July 30th, the ship was struck by two torpedoes by a Japanese submarine.

The torpedo strike was totally unexpected and the Indianapolis went down in 12 minutes. 300 souls went down with the ship.

This left almost 900 sailors floating in the water. There were few lifeboats, and not everyone had a life preserver. They were floating in the middle of the ocean and no one knew where they were.

Little did they know their nightmare was just beginning.

Stranded, floating in the open ocean there were several problems that the survivors were facing.

The second was dehydration. You can’t drink seawater, so everyone would effectively be slowly dehydrating, especially considering that they were out in the open sun.

Finally, the most terrifying prospect was sharks. The location where the ship sunk was some of the most shark-infested waters in the world, and the sharks that were there were some of the world’s most aggressive: the oceanic whitetip.

The ship sank in pitch darkness. While the sailors in the water could hear each other, they could barely see each other.

The sharks were attracted by the sounds of the explosion, the movement of the men, and of course the blood in the water.

The first night, the sharks mostly attacked the dead in the water.

When the sun came up, most of the men began to join up and link arms with each other. By joining up in a group, it improved their buoyancy, they were able to offer each other moral support, and they could keep sharks at bay in a group.

The men could all clearly see the sharks. They were swarming under and around them.

Survivor Edgar Harrell recalled the scene in the open water, “At any given time you could look out and see big fins swimming around and around and around. All of a sudden you heard a blood-curdling scream and you look and you see the shark had taken him under.”

The men in the water waited for relief to arrive, but no one showed up.

As the hours passed, it went into days.

Men became delirious from the sun, exhaustion, and dehydration. Some began swimming to illusionary islands off in the distance.

Some would break away from their groups and started thrashing, making them easy targets for the sharks.

When someone in a group died, they would push the body away trying to placate the sharks for a while by offering up one of the corpses.

Over time, the skin of the sailors in the water began to rot and come off. If you have ever been in the water for an extended period of time, you know the skin in your fingers can become wrinkled. Studies have found that serious damage can happen to skin after only 12 hours of continuous exposure to water.

The survivors of the USS Indianapolis were in the water for four days and five nights.

As it turns out, the Navy was totally unaware that the Indianapolis had sunk. There was nothing in place to notify the Navy that the ship never arrived in Leyte.

At 10:25 in the morning of August 2, a small bomber and a PBY-2 floating plane spotted the men in the water. They dropped a life raft and all available units were sent to the area in a rescue effort.

Another float plane arrived in a few hours. After seeing men getting attacked by sharks, the plane decided to break regulations and land even though the waves were 12 feet high.

They managed to pick up 56 survivors. They had so many men on the plane that they literally couldn’t hold them all. They had to lash some men to the wings, and the plane wasn’t able to fly. Even if it couldn’t fly, the men were at least out of the water and safe from sharks.

After sunset, the first of the rescue ships arrived, the USS Cecil J. Doyle. Six other ships arrived to get the remaining survivors.

The seaplane which landed wasn’t able to be flown again, so it was abandoned and sunk by one of the ships.

Of the approximately 900 men who survived the initial sinking of the ship, only 316 were rescued.

There was an investigation into the incident after the rescue took place.

They found that the Navy’s system of tracking ships was deeply flawed. The fact that no one knew that the Indianapolis hadn’t arrived was a huge problem in the navy’s tracking procedures.

Furthermore, before the ship sunk it managed to send out a radio signal. It turns out that three different radio stations received the message, but none of them acted on it. One unit commander was drunk, another had been told not to be disturbed, and another thought it was a Japanese trick.

In November of 1945, he became the only captain of a Navy ship in World War II to be court marshaled for losing his ship. He was brought up on two charges: failing to order his men to abandon ship and hazarding the ship.

He was cleared of the first charge and found guilty of the second because he wasn’t zig zagging to avoiding submarines.

Most of his men thought that the conviction was wrong. In fact, the Japanese submarine commander testified that had the ship zig-zagged, it wouldn’t have been made a difference. There was actually a lot to suggest that the Navy was at fault for not providing adequate intelligence

Admiral Chester Nimitz eventually rescinded the sentence and McVay retired as a rear admiral in 1949, but he never really lived it down. He killed himself in 1968 at the age of 70.

The sinking of the USS Indianapolis led to many changes in the Navy.

The Movement Report System was created to ensure that all ships are reported if they don’t arrive on time at port.

Also, as the Indianapolis was sailing alone, the Navy required any ship with over 500 sailors to have an escort ship. In the event that one ship would be sunk, the second ship could provide rescue or at least get out a second distress signal.

In 1996, due to the work of a sixth-grade student, the case of Captain McVey was once against brought to the public’s attention. After testimony from the survivors, in 2000 a joint resolution of Congress was pass exonerating Captian McVey, which was then signed by the President.

The sinking of the USS Indianapolis remains to this day one of the worst naval disasters in US history. Not just because of the tremendous loss of life, but because of how most of the men died and the series of missteps that allowed it to happen.