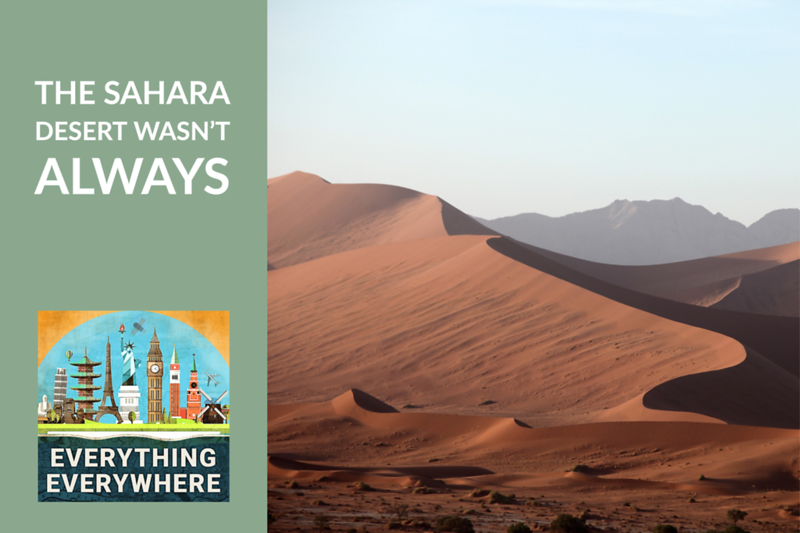 The Sahara desert is by far the largest desert in the world. It evokes images of sand dunes, camels and just being really really dry.

However, it didn’t always use to be that way. Quite recently, at least geologically speaking, it was a place with grasslands and forests.

While it disappeared and became a desert, some think a green Sahara might return.

Learn more about how the Sahara desert wasn’t always a desert, on this episode of Everything Everywhere Daily.

There are brand new classes on Masterclass that you check if you want to learn from some of the world’s best.

It might seem hard to believe, but the area we call the Sahara desert was once a lush, green place where humans and animals lived and thrived.

Researchers have determined that the Sahara might have only become a desert 5,500 years ago.

This is a long time ago, but not that long at all in geologic time.

I’ll start with a quick overview. The Sahara Desert is the largest non-polar desert in the world. Technically, Antarctica is a desert and it is larger than the Sahara, but it doesn’t really evoke images of what we think of as a desert.

The Sahara basically makes up the entire northern quarter of the continent of Africa, save for fertile areas near the coast and the Nile River basin.

Most of it lies within the countries of Algeria, Libya, and Egypt. The countries to the south, Mauritania, Mali, Niger, Chad, and Sudan also have significant parts of their countries in the Sahara, but most are in the semi-arid Sahel region, which I’ll discuss in a future episode.

The region consists mainly of rocky outcrops and sand dunes, some of which reach 180 meters or 590 feet high.

Some of the hottest temperatures ever recorded on Earth have occurred in the Sahara.

There are people who live in the Sahara, but not many. There is a total population of only 2.5 million inhabitants over the entire Sahara region across all countries, or roughly 1 person per square mile, which is less than the population density of Alaska.

So how do we know that the Sahara used to not be a desert?

The evidence is all around if you look.

For starters, there is cave art located at many places in the Sahara which show animals that don’t live in the Sahara today. It isn’t just a few instances of rock art either, it’s dozens of them with thousands of paintings and carvings.

It is incredibly implausible that so many people would travel so far across such inhospitable terrain just to paint images of animals that didn’t exist where they were.

However, there is a whole lot more evidence. Archeological digs, dried lake beds, animal fossils, trapped pollen, radioisotope analysis, and plain old geologic stratigraphy all point in the same direction. The Sahara wasn’t a desert just over 5,000 years ago.

In the country of Niger, in 2005 and 2006, over 200 graves were found on the shore of an ancient lake. Two of the bodies were buried on a bed of flowers…which don’t exist in the desert. Along with the graves they also found the remains of animals, including large fish and crocodiles, which definitely don’t live in the Sahara.

They were members of a group called the ??Kiffians.

Another method of determining what the Sahara was like in the past is to analyze the dust and sand which blows off of the Sahara. There is a regular amount of dust that blows from the Sahara into the Atlantic. Ocean sediment analysis has given us a history going back several hundred thousand years.

It was also actually written about in antiquity. The Greek historians Herodotus and Strabo centuries apart offhandedly mentioned that the Sahara was once green.

Basically, think about what it is like in the Serengeti today. It would have been a grassland with tons of grazing animals as well as associated predators.

This enormous grassland would have drawn human beings as it would have been a fantastic hunting area. From the graveyard found in Niger and the numerous rock art drawings found all throughout the region, that is exactly what appears to have happened.

It also means that there is probably a lot of evidence of human habitation which hasn’t been found because it is lying deep beneath the sand dunes.

It also puts a different twist on the rise of civilization in the region.

When the rains dried up and the desert began encroaching on the grassland, most of the people who lived there would have had to have left. That would have meant migrating either to what is now the Sahel in the south, the Atlantic coast in the west, the Mediterranean coast in the north, or the Nile River basin in the east.

I don’t think it is a coincidence that the end of the green Sahara period coincided with the rise of dynastic Egypt. Hunters and pastoralists from the Green Sahara may have wound up becoming farmers in the Nile.

It is entirely possible that these migrants from the Sahara could have come in conflict with people in the regions where they migrated to, and these conflicts were never recorded.

To understand this, we need to turn to climate science.

The green Sahara period is technically known as the African humid period, or to get eleven more technical, periods.

One of the things they’ve discovered from ocean floor sediment is that the Sahara actually goes in cycles of about 20,000 years. It actually seems to go from desert to green and back to the desert again, over and over.

In this case, it is the change in the tilt of the axis of the Earth that matters.

8,000 years ago, the axis of the Earth was tilted at about 24.1 degrees and today it is 23.5 degrees. That change doesn’t sound like much, but it actually has a huge impact.

Also, the direction of the tilt has changed. Today, the Earth is closer to the sun during the northern hemisphere winter and the southern hemisphere summer. When the Sahara was green, it was the other way around.

That meant during the African humid period, there was more solar radiation during the summer. You might think that more radiation in the summer would increase desertification, but in the case of the Sahara, it meant more evaporation and an increase in monsoon rains.

In other words, when more solar radiation falls on the northern hemisphere in the summer, it changes wind and rain patterns such that it brings in rains to the area that we call the Sahara.

So OK, the Earth goes through these cycles which can change weather patterns. By why did everything change so fast?

The reason why this most recent change occurred so rapidly might have had to do with humans.

If the humans who lived there were pastoralists and they had animals like goats or sheep, they might have accelerated the removal of grass through overgrazing.

As I mentioned before, 5,500 years ago is not a long ago in terms of geology. For the creation of a desert, it is quite fast. This is well within the time period where early civilizations and cities existed.

The creation of the Sahara desert resulted in radical changes which affected civilizations in West Africa, the Horn of Africa, Egypt, and the Mediterranean.

In fact, some of those civilizations might owe their existence to the Sahara.

The creation of the Sahara put a gigantic natural barrier that separated the continent. It impacted trade as well as the migration of animals.

In fact, to this day it is common to think of Africa as sub-Saharan Africa and North Africa.

I’ll close by noting that is very likely someday in the future, thousands of years from now, that the Sahara will once again bloom.

The Earth will change its tilt, the Earth’s orbit will precess, and animals will graze on what are today sand dunes.

Today’s review comes from listener Podfan01 on Apple Podcasts in the United States. They write:

Great new (to me) podcast

I have been a fan of podcasts for so long I listened to Serial as a serial. This is my latest favorite podcast and one I am recommending to all my friends and relatives. Each podcast is short and concise but still filled with lots of interesting facts and stories. You should subscribe to this podcast NOW.

Thanks, Podfan! I appreciate you recommending the show to everyone. It is also nice to be thought of in the same category as Serial.