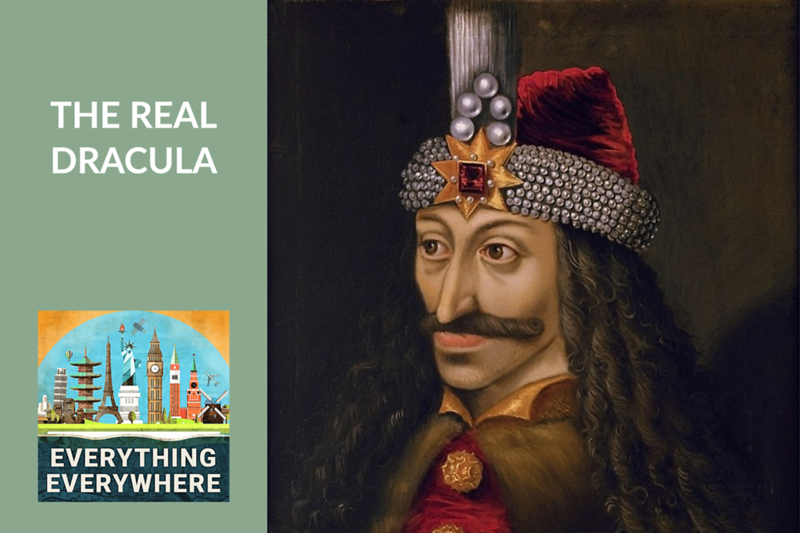 Vampires have been been a part of folklore for centuries. Perhaps no mythical vampire is more famous than Count Dracula.

While Count Dracula might be fictional, believe it or not, he was based and named on a real person who lived in 15th century Romania. While he might not have been a vampire, he was still plenty deadly.

Learn more about Vlad the Impaler, also known as Vlad Dracula, on this episode of Everything Everywhere Daily.

The classical interpretation of Dracula involves a whole bunch of things: he sleeps in coffins, only comes out at night, has a weakness for garlic and crosses, can’t see himself in a mirror, and of course, drinks other people’s blood.

None of this really has anything to do with the historic Dracula, however.

The real Dracula was named Vlad III or Vlad Dracula who was the second son of Vlad Dracul. The word “dracul” meant dragon in medieval Romanian and he got the name when he was initiated into the Order of the Dragon which was a chivalric order.

Dracula just means “son of the dragon”. In modern Romanian, “dracul” has come to mean a word for the devil.

His father, Vlad Dracul was the ruler of Wallachia. It was situated in modern-day Romania and was located north of the Danube River and south of the Carpathian Mountains.

Vlad’s father and eldest brother were killed when forces backed by the Kingdom of Hungary invaded Wallachia and installed his cousin Vladislav II on the throne.

In 1448, Vlad then struck back with the support of the Ottomans and he took control of Wallachia, taking his first of three turns as ruler.

It didn’t last long as Vladislav came back and pushed Vlad out, back into Ottoman territory. He was in exile for 8 years.

In 1456, he returned to Wallachia, this time with the backing of Hungary, and Vladislav was killed in the invasion, and Vlad became the ruler for the second time.

It was during his second reign where Vlad developed his reputation and his taste for killing people.

He began his reign by enacting revenge against the boyars, who were the aristocracy in the region. Many of the boyars plotted against his father and his brother to have them killed.

He held a banquet for the boyars and had them all killed, in his own version of the Treachery of the Long Knives. Estimates are in the hundreds to thousands for this first round of killings.

He then had a falling out with the Saxons who lived in Wallachia. The Saxons were German migrants who moved to the region centuries earlier. He impaled or burned alive many Saxon merchants and their families.

Here I need to take a moment to talk about the thing which gave Vlad his nickname: impalement.

Impalement is not a nice way to die. In a nutshell, impalement basically putting someone on a vertical pole, with the pole up their bum. They are placed such that they can’t get themselves off the pole because their feet are barely or not touching the ground.

Death could take several days as the pole keeps going further and further into the victim’s body.

Vlad didn’t have much love for the Ottomans, having been held hostage by them when he was younger.

When Ottoman envoys refused to take off their turbans in his presence, he had the turbans nailed to their heads.

He began military campaigns against the Ottomans in the regions south of Wallachia.

It turns out his previous impalings were just practice.

A Greek historian named Laonikos Chalkokondyles, who was a contemporary of the period said,

The sultan’s army entered into the area of the impalements, which was seventeen stades long and seven stades wide. There were large stakes there, on which, as it was said, about twenty thousand men, women, and children had been spitted, quite a sight for the Turks and the sultan himself. The sultan was seized with amazement and said that it was not possible to deprive of his country a man who had done such great deeds, who had such a diabolical understanding of how to govern his realm and its people. And he said that a man who had done such things was worth much. The rest of the Turks were dumbfounded when they saw the multitude of men on the stakes. There were infants too affixed to their mothers on the stakes, and birds had made their nests in their entrails.

This scene of forests of people being impaled was repeated many times.

In addition to impaling 10,000s of people, he also supposedly had banquets in the middle of his forest of impalements and the rumor was he would dip his bread in the blood of his victims.

It has been estimated that he may have killed up to 80,000 people, a large number of which were killed via impalement.

Vlad was later removed from power, imprisoned, and came back to power briefly before being killed and his severed head sent to the Ottoman Sultan.

So, the story of Vlad Dracula or Vlad the Impaler is an interesting one, but it is a far cry from the modern-day depiction of Dracula.

How did one medieval psychopath end up as a vampire hundreds of years later?

That had everything to do with Bram Stoker, the author of the novel Dracula which was published in 1897.

The character of Count Dracula was a mishmash of history and folklore, as well as some of Bram Stoker’s own inventions.

The character name obviously came from Vlad Dracula, in addition to the location of Transylvania, which is where Vlad was born.

Another person who might have been a source of inspiration was a woman by the name of Elizabeth Báthory. She was a noblewoman of the late 16th and early 17th century in Hungary who was a serial killer. She might have killed between 80 and 650 people and may have taken baths in their blood, and I am absolutely going to do an episode on her in the future.

Vampires actually come from European folklore. They were undead creatures who fed on the life essence of the living, usually in the form of blood.

Stoker took all of these elements, added much of his own, and created the character of Dracula.

The image we have of Count Dracula mostly comes from the 1931 film Dracula where the title character was played by the Hungarian-American actor Bela Lugosi.

Since then there have been dozens and dozens of representations of Count Dracula in movies, TV, stage, books, cereal boxes, and Sesame Street.

The actual legacy is Vlad Dracula is surprisingly mixed. History has judged him to be cruel and evil and that is why has the nickname The Impaler.

However, there are still some that think Vlad is a hero. He fought against and had victories against the Ottoman Turks when they were on the ascendant throughout Europe. They are willing to overlook a couple of tens of thousands of impalings.

I’ll close by noting that if you visit Sighisoara, Romania, you can view in person the only known painting of Vlad Dracul, the father of Vlad the Impaler, in Casa Vlad Dracul. Today it is a restaurant but is also believed to be the birthplace of Vlad Dracula. I got to visit it several years ago and it was a really interesting experience.

So, in summary, there was a real Dracula and he was in many ways far more horrible of a person than the fictional Dracula. However, the Transylvanian vampire that we know today bears little resemblance to the 15th-century madman who preferred to kill his victims by putting them on spikes, rather than biting them in the neck.

Today’s review comes from listener displaynameherenow over on Apple Podcasts. They write:

This is a terrific podcast for people who are curious about the world around them. If you like to know the details behind things, I can’t recommend it enough. The episodes are bite-sized and the host makes everything entertaining.

Thank you very much displaynameherenow. I’m glad to know that people enjoy the show format.