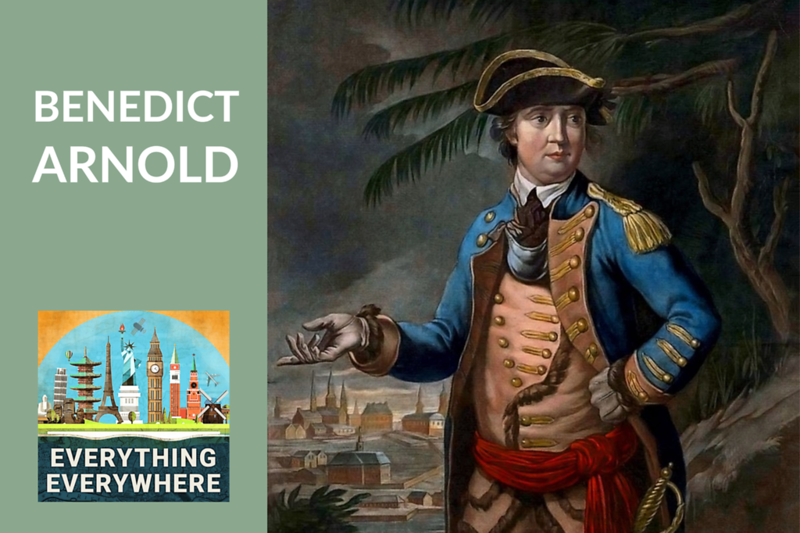 At the start of the American Revolution, a young American major general was one of the brightest stars of the war. He was responsible for several major campaigns and he had a great future ahead of him in his new country.

By the end of the war, he was a British General fighting against the United States and his name would forever be spoken by Americans as a synonym for traitor.

Learn more about Benedict Arnold and why he decided to turn on his country, on this episode of Everything Everywhere Daily.

If things had gone differently, Benedict Arnold V would undoubtedly be considered one of the founding fathers of the United States.

He was born in 1741 in Norwich, Connecticut to a family which was the original founders of the Rhode Island Colony. His great-grandfather, Benedict Arnold I, was the president and governor of Rhode Island. He was as close to American aristocracy as you could come.

He was one of six children, but only he and a sister survived to adulthood.

By all accounts, Arnold was athletic and good-looking. One of his neighbors in Connecticut said that Arnold was “the most accomplished and graceful skater” he had ever seen.

Despite his family pedigree, his father was an alcoholic, which brought a great deal of shame to Arnold. The alcoholism may have been a result of losing four of his children. His father squandered the family fortune which would have otherwise allowed the young Benedict to attend Yale.

At the age of 16, he joined the Connecticut militia to fight in the French-Indian War, but his unit turned around after the fort they were marching to was captured. His service in the war lasted all of 16 days.

Benedict was accepted as an apprentice apothecary in Norwich and later set up his own apothecary business in New Haven.  Using the business as a springboard, he branched into other areas including shipping to the West Indies, and became quite successful.

By all accounts, prior to the revolution, Arnold was a staunch patriot and supporter of the American cause. British laws such as the Stamp Act and the Sugar Act affected him directly. He flouted British laws and joined the secret Sons of Liberty.

In March of 1775, he formed the Governor’s Second Company of Connecticut Guards along with 65 other men of New Haven. He was elected as their captain and was responsible for the leadership of the unit.

When war broke out the next month in Lexington and Concorde, Massachusetts, Arnold and his unit made the decision to march to Boston, but he wasn’t given permission to take any gunpowder from the town’s magazine.

Arnold told one of the town fathers, David Wooster, “You may tell the selectmen, that if the keys are not coming within five minutes, my men will break into the supply-house and help themselves. None but the Almighty God shall prevent me from marching.”

This event is still celebrated every year in New Haven as Powder House Day on April 22.

This began what can only be described as a successful military career.

When he got to Boston, he organized a raiding party to take the British Fort Ticonderoga which sat on Lake Champlain. He managed to take the fort with hardly a fight, captured the British canons, as well as the largest warship on the lake.

Arnold was promoted to the rank of Colonel.

In June, Connecticut sent 1,000 men to the fort, and command of the fort was to be given to Colonel Benjamin Hinman. This caused Arnold to erupt in anger and resign his commission as he felt he was benign slighted.

This event turned out to be a foreshadowing of what would happen later. This is was Arnold’s biggest character defect. He constantly felt underappreciated and overlooked by other officers and congress. Over time, it stoked his resentment and envy.

He made an appeal directly to George Washington to lead an expedition to the lightly defended Quebec City. He was given the rank of Colonel in the Continental Army, but he was not given command of the Quebec City expedition, which he again took as another insult.

The commander was killed in the operation and the siege of Quebec was unsuccessful, but Arnold was recognized for his work by being promoted to the rank of Major General.

In December 1776, he was assigned to the defense of Rhode Island and in February 1777 he learned that he was passed over by congress for a promotion.

In probably his greatest action of the war, he distinguished himself at the Battles of Saratoga, which was a critical victory for the Americans. However, Arnold was seriously wounded in his left leg.

Normally, such a wound would result in an amputation, but instead, he kept his leg and had it improperly set which resulted in it being 2 inches shorter than his right leg.

He returned to Philadelphia, which had just been evacuated by the British, and was appointed the military governor of the city.

It was a horrible decision and Arnold was ill-suited to be in that role. He looked to make money off his position and felt that he was owed it due to his injury.

While in Philadelphia he began seeing 18-year-old Peggy Shippen, who was the daughter of a loyalist judge. She had also been recruited into a British spy ring run by Major John André.

Benedict Arnold by 1779 had become a massive ball of bitter resentment. He felt he was overlooked and snubbed by Congress and Washington. He was jealous of other rival generals who were promoted over him. He was angry at having been injured lost his business, and then not being allowed to profit from his position. Finally, he felt that his injury and sacrifice weren’t appreciated.

To top it all off, he had a loyalist wife who was whispering poison into his ear, reinforcing all of his perceived wrongs.

While in Philadelphia, his feuds with local politicians resulted in his court-martial. He was convicted of two counts of trying to make money from a position of authority and was given a slight reprimand by General Washington. To top it off, Congress reprimanded him for his expenses on the Quebec campaign and said they he owed them £1,000.

In 1780, Arnold was given command of the strategic fort of West Point on the Hudson River, which also gave him control of the entire river from Albany to New York City.

Arnold began slowly weakening the defenses of West Point. He ignored repairs, sold supplies on the black market, and misallocated troops under his control.

However, the plot was soon discovered and Major Andre, who was his contact, was captured. Upon discovering this, Arnold took a boat to the HMS Vulture which took him to New York.

The news of the treason shook the country. Washington tried to remain calm and there was talk of exchanging Major Andre for Benedict Arnold, but that didn’t happen. Major Andre was hung.

Arnold had negotiated £20,000 bounty from the British but ended up only getting £6,315 pounds because he couldn’t deliver West Point. He was also commissioned as a Brigadier General in the British Army.

He lead several missions against the Americans, but they weren’t that major and the war was nearing its conclusion.

The British soldiers he lead didn’t particularly like him. The British officers didn’t trust or respect him. The Americans had issued orders that he be summarily executed if he were captured.

He ended up moving to New Brunswick where he had a failed business venture. The people there hated him so much that they burned him in effigy in front of his own house.

In the end, Benedict Arnold never got what he wanted. He never became rich, and he never got the respect he so desperately wanted from the Americans.

Stories about Benedict Arnold grew over the years such that everything about him during his whole life became treacherous or conniving.

Comparisons were made between Arnold and confederate soldiers during the Civil War.

Benedict Arnold is one of a few people around the world whose very name has become synonymous with treason.

The term “mirjafar” is used in Bengali or Urdu to refer to someone as a traitor, and it comes from an 18th century Bengali general who helped the British.

The term quisling had taken on use since World War II to describe a collaborator. The term comes from Vidkun Quisling who was the head of the Norwegian government during the Nazi occupation.

The name Wang Jingwei is used similarly to quisling in Chinese, and it refers to the leader of Japanese occupied China.

In Britain, Guy Fawkes who attempted to blow up parliament has an entire day where people can revile him.

As for Benedict Arnold, believe it or not, he sort of has several memorials to him in the United States, but they are unlike any other war memorials you will find.

At the Saratoga National Historical Park, there is a stone memorial that only depicts a left boot. It reads, “In memory of the most brilliant soldier of the Continental Army, who was desperately wounded on this spot, winning for his countrymen the decisive battle of the American Revolution, and for himself the rank of Major General.”  It never mentions the name of Benedict Arnold.

At the Saratoga Victory Monument in Saratoga County, New York, there are statues for three generals: General Horatio Gates, General Philip Schuyler, and General Daniel Morgan. There is a fourth spot for a statue that remains empty. That is the one for Benedict Arnold.

Finally, in the Cadet Chapel at the US Military Academy at West Point, there are plaques for all of the Generals of the Revolutionary War. One, however, is unlike the others. It simply says “Major General. Born 1740″. There is no name.

I’ll end with one story which might be apocryphal, but it is still interesting.

Supposedly while he was with a British unit during the war, he captured an American soldier. While he was questing him, aware of how he was viewed by the Americans after turning on them, he asked the soldier what would happen if he were to be captured.

The soldier replied, “Well, I think they could cut off your left leg that was injured at Saratoga and bury it with full military honors. As for the rest of you, you could be hung by the neck at a traitor.”