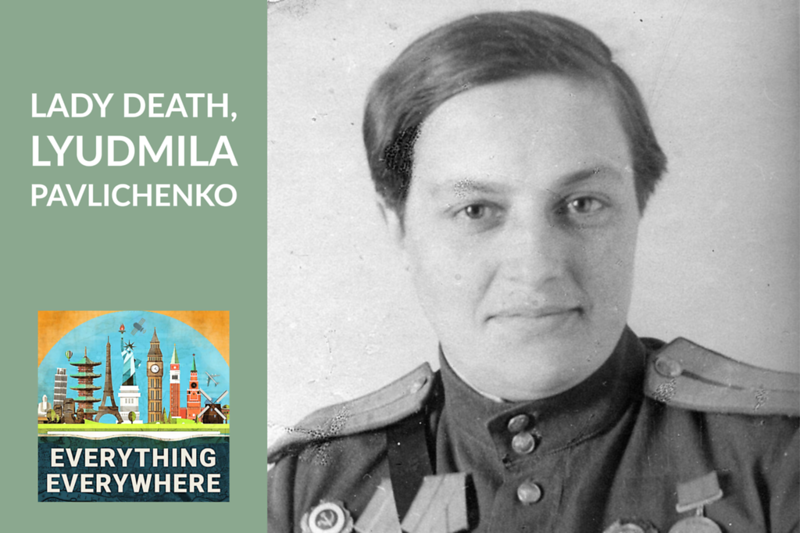 In 1941, after the German invasion of the Soviet Union, a 24-year-old woman in Ukraine volunteered to join the Red Army.

She was initially pressured to become a nurse like most women who volunteered, however, that wasn’t what she wanted to do. She wanted to be on the front lines.

Within a year, she was to become one of the most lethal soldiers in all of the second world war.

Learn more about Lyudmila Pavlichenko, aka Lady Death, on this episode of Everything Everywhere Daily.

Who says women don’t go to war? From Vikings and African queens to cross-dressing military doctors and WWII Russian fighter pilots, these are the stories of women for whom battle was not a metaphor.

The woman warrior is always cast as an anomaly – Joan of Arc, not GI Jane. But women, it turns out, have always gone to war. In this fascinating and lively world history, Pamela Toler not only introduces us to women who took up arms, but she also shows why they did it and what happened when they stepped out of their traditional female roles.

The woman we know as Lyudmila Mikhailovna Pavlichenko was born Lyudmila Belova in present-day Ukraine, in what was then the Russian Empire in 1916.

She was self admittedly a tomboy growing up and was always very competitive.

When she was 14 years old, her parents moved to Kyiv. While in Kyiv legend has it that she encountered a boy her age who was bragging how good of a shot he was with a rifle. She later noted, “I set out to show that a girl could do as well a boy… so I practiced a lot.”

She joined a local shooting club and began practicing. She quickly showed proficency and earned the Voroshilov Sharpshooter badge, which was a Soviet civilian award for excellence in sharpshooting.

She was married very early at the age of 16 and had a son. It was this marriage where she took the name Pavlichenko. However, the marriage didn’t last very long and she and her young son moved in with her parents.

She took a job at the Kyiv Arsenal which manufactured armaments for the Soviet military.

In 1937, she enrolled in a university with the intent of becoming a history teacher. She competed on the track and field team in the pole vault, and also attended a Soviet sniper school on the side to keep her marksmanship skills up to snuff.

Like everyone in the Soviet Union, Lyudmila’s world was turned upside down with the German invasion in June 1941.

By this time she was in her fourth year at Kyiv University.  When she heard news of the invasion, she was among the first group to go to the Odessa recruiting office to volunteer to fight in the war.

At the time, like in most armies, what few women that were in the Red Army were relegated to support roles. Lyudmila was encouraged to become a nurse.

Lyudmila, however, didn’t want to become a nurse. She wanted to fight. She refused the position of a nurse and argued with the recruiting office that she had been trained as a sniper and had proven her ability at marksmanship.

The recruiter eventually relented and she was assigned to the Red Army’s 25th Rifle Division.

Just becuase she was assigned to an infantry unit as a sniper didn’t mean she was actually doing any sniping. In fact, she wasn’t even issued a gun. The only thing she was given was a single grenade.

The lack of a weapon was due to shortages and the fact that she was just considered low on the totem pole being a woman.

This situation changed, however, on August 8, 1941. One of her comrades was hit and he gave her his Mosin–Nagant model 1891 bolt-action rifle. She later noted  “He was such a nice, happy boy, and he was killed just next to me. After that, nothing could stop me.”

Finally, with a rifle in her hands, she went to work. She quickly killed two Romanian soldiers who were a quarter mile, or 400 meters, away. (and FYI, Romania was one of the Axis powers and contributed troops to the invasion of the Soviet Union)

This was the beginning of her one-woman reign of terror.

During the two and a half month-long Siege of Odessa, which began the day she got her rifle, she had 187 confirmed enemy kills. When she reached the 100 level, she was promoted to senior sergeant.

When the Romanian forces took Odessa, she and her unit were evacuated by sea and sent to Sevastapol where she fought in the Siege of Sevastapol for 8 months.

Not only did she rack up more enemy kills, but she also was training snipers as well. The students she trained combined had over 100 enemy kills.

She perfected her art. She would often go out in the morning and not return back to camp until night. She would crawl on her belly for hours to get a shot. She once reported laying down in the grass for 15 hours in a duel with another German sniper.

Another sniper duel lasted a full three days. In the end, she said, her opponent made one move too many.

By the end of the Siege of Sevastapol, she had 257 confirmed kills, and she was promoted to the rank of lieutenant.

Word of her deadly accomplishments had spread. She had earned the nickname “Lady Death”.

The Germans knew who she was. They would often use loudspeakers to try and bribe her to switch sides. They would say, “Lyudmila Pavlichenko, come over to us. We will give you plenty of chocolate and make you a German officer.”

They also put a reward on her head and threaten to tear her into pieces, one for each soldier she killed.

She got married to another sniper who was on the front lines with her, but he was killed just days later from a mortar shell.

In June 1942, Lyudmila Pavlichenko herself was injured from a piece of schrapnel from a mortar round. With this injury, the decision was made to pull her from active combat duties. It was her fourth combat injury

By the time she was removed from the front line, she had a total of 309 confirmed enemy kills. 36 of which were opposing snipers. She wasn’t just the most lethal female sniper in history, but one of the most lethal in world history period up to that point.

She did all of that over a span of only 10 months.

Once she was taken out of combat, her story took a very different turn.

She was a highly decorated war hero, and most importantly she had become famous. The Soviets didn’t want to risk losing her at this point because she was much more valuable for propaganda purposes.

In September 1942, she was sent to the United States and Canada on a publicity tour to try to win support for opening up a second front in the war.

She became the first citizen of the Soviet Union to visit the White House. She meet President Roosevelt and Mrs. Roosevelt took a liking to her.

Eleanor Roosevelt invited Lyudmila to join her on a tour of the United States to tell her story of fighting on the front lines to Americans.

In one of their first stops in Washington DC, Lyudmila met the American press for the first time. She didn’t speak English so everything had to be communicated through an interpreter, but she was dumbfounded by the questions.

One of the questions asked if Soviet women were allowed to wear makeup on the front line. She replied, “There is no rule against it, but who has time to think of her shiny nose when a battle is going on?”

She got the same treatment from the press everywhere she went in the country. She was dubbed the “girl sniper” by the New York Times.

Articles were written about the length of her skirt being too long, and that she never wore makeup. Another article reported that her uniform was ill-fitting and made her look fat.

She gave as good as she got with the press. In an interview with Time Magzine, she noted, “I wear my uniform with honor…It has the Order of Lenin on it. It has been covered with blood in battle. It is plain to see that with American women what is important is whether they wear silk underwear under their uniforms. What the uniform stands for, they have yet to learn.”

Over time, she found her voice and was able to captivate crowds with her stories.

At a rally in Chicago, she said to the crowd. “Gentlemen, I am 25 years old and I have killed 309 fascist invaders by now. Don’t you think, gentlemen, that you have been hiding behind my back for too long?”

The crowd stood in stunned silence for several seconds before erupting in applause.

While she was popular with the crowds, the media still didn’t get it. Malvina Lindsey who wrote “The Gentler Sex” column for the Washington Post wrote about the way Lyudmila dressed, “Isn’t it a part of military philosophy that an efficient warrior takes pride in his appearance?… Isn’t Joan of Arc always pictured in beautiful and shining armor?”

Nonetheless, she was a hit with the crowds. In every American city, she was showered with gifts and attracted huge crowds. Woody Gutherie wrote a song about her titled “Miss Pavlichenko”.

When she returned to the Soviet Union, she spent the rest of the war training snipers and never saw front-line duty again.

She was awarded the Hero of the Soviet Union and twice awarded the Order of Lenin, the highest awards given in the country.

She later finished her schooling and became a historian with the Soviet Navy and later the Department of Veteran’s Affairs.

She suffered from depression, post-traumatic stress disorder, and alcoholism for the rest of her life.

She was able to meet Eleanor Roosevelt one last time in 1957 when Mrs. Roosevelt visited Moscow.

While women never made more than 2% of the Red Army, there were over 2,000 female snipers who fought for the Soviets. Only 500 of them survived the war.

Lyudmila Pavlichenko has been honored on postage stamps, in movies, and in books. There have even been video game characters that were inspired by here.

While there may be no way to know for certain, there is a very good chance that  Lyudmila Pavlichenko was the most lethal female soldier in history.