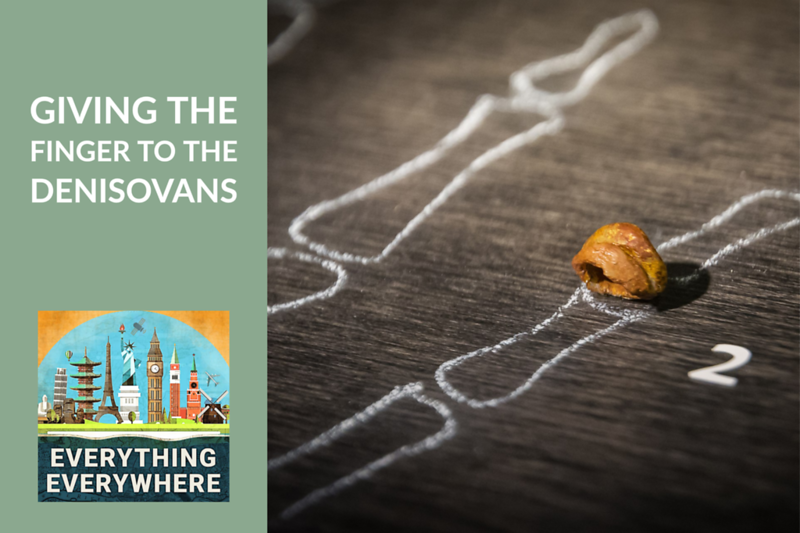 In 2008, researchers searching for fossils in the Denisova cave in Siberia came across something interesting. It appeared to be the bone from an ancient hominid species.

Subsequent DNA analysis on this bone has revolutionized everything we know about the origin of humanity. Had this bone been discovered a few decades beforehand, we might never have known about it.

Learn more about the Denisovans, how we discovered them and how they affect humanity today, on this episode of Everything Everywhere Daily.

If you are interested in the origins of humanity, CuriosityStream has several programs you’ll enjoy.

Shows like EnigmaMan, Who Killed the Neanderthals, the Manot Skull, the Neanderthal’s Dark Secret, Rapidly Evolving Humans,  Leaps in Evolution, Homo Naledi, and Human by Chance.

You can get an entire year of CuriosityStream for less than $20. It is one of the cheapest streaming services on the Internet.

Today, human beings, aka homo sapiens, are the only hominid species on Earth.

Tens of thousands to hundreds of thousands of years ago, however, that was not the case. We shared the planet with other hominid species which were closely related to humans.

Probably the best known hominid species is Homo Neanderthal. The first Neanderthal skeleton was found in 1856 and since then we have found countless fossils and other evidence of their existence.

The only other species of hominids we had found were far older, going back many hundreds of thousands or millions of years. There was a big gap in the fossil record between the last Homo Erectus which appeared about 300,000 years ago and Neanderthals. We didn’t know of any other hominid species which existed in the last 100,000 years other than humans and Neanderthals.

In Siberia, there is a remote cave in the Altai Mountains. Caves are usually good places to search for fossils because they are protected from the elements. Some of the most significant paleontology finds have been found in caves around the world.

The Siberian cave is known as the Denisova cave. It was named after an 18th-century hermit known as Saint Dyonisiy, which is the Russian word for Denis.

The cave is unique in that the average temperature inside the cave is 0 degrees Celsius, or 32 degrees Fahrenheit.

The cave had been explored in the early 1970s and they found evidence of some early humans who had lived in the cave as well as some Neanderthal artifacts.

In 2008, a team led by Michael Shunkov of the Russian Academy of Sciences returned to the cave. It was during this expedition that they found something which seemed rather small and insignificant, but turned out to be earthshattering.

They found a single bone from the little finger of the right hand of a juvenile female hominid.

The bone was said to have come from “Woman X”. They really didn’t know anything more. The bone was so small they couldn’t really figure out what hominid species it came from.

However, given the conditions in the cave, they were able to extract DNA from the bone.

What they discovered was remarkable and unexpected. It wasn’t from a human and it wasn’t from a Neanderthal. It was from something totally different.

They named this new species Denisovans, after the cave in Siberia in which it was found.

That meant that Denisovans were around at the same time as both humans and Neanderthals.

Since the 2008 discovery of the finger bone, there have been several other fossils found, and some bones which had been found earlier have been identified as Denisovan.

However, the total number of fossils that have been identified is still very small. In total there are fragments from five distinct individuals which have been found, and those don’t amount to much.

There has been only one other piece of Denisovan bone that has been found outside of the cave. That was part of a mandible that was discovered back in 2000 in a cave in the Tibetan Plateau in China.

For most very ancient fossils, there is no possibility of DNA analysis. You are limited to doing skeletal analysis and a study of the comparative anatomy of fossils.

Because the fragments which have been found are so recent, geologically speaking, and given the conditions under which they were preserved, we did have DNA and from that, we have been able to learn more than you would from just the bone itself.

First, we know from DNA that Denisovans mixed with both Neanderthals and Homo Sapiens. We have found DNA fragments from each group in the genetic makeup of the others.

Second, via the genetic profiles of current humans, we can estimate where the Denisovans lived. They are believed to have lived mostly across Siberia and East Asia.

However, the modern humans with the highest percentage of Denisovan DNA are in Papua New Guinea and Aboriginal people in Australia. They might have migrated into this region when it was connected to Asia by land when sea levels were lower.

If so, they were probably the first hominid group to cross the Wallace line, which is a line that extends through Indonesia where most life forms on one side are from Asia, and on the other side are from Australia. I’ll be doing a future episode on this subject.

However, they also probably weren’t only in Asia. Another group with a large amount of Denisovan DNA is people from Iceland. That means there might have been a population of them in Europe.

Also, you probably have some Denisovan DNA in you, as well as some Neanderthal DNA as well.

Another theory is that all three of the recent hominid species, Neanderthal, Denosovians, and Humans, descended from an earlier species, Homo Heidelbergensis, about 600,000 years ago in Africa. Some groups left Africa and spread into different groups becoming the various hominid species.

There is still an awful lot we don’t know, and many of these theories are just that. It is a best guess based on the scant evidence we have that conforms to the facts that we know so far.

We can’t know based on the bone fragments we have on how big they were or their skeletal structure. We know that Neanderthals were rather stocky with pronounced brows, but we have no idea if the Denisovans were the same.

It is entirely possible that there are Denisovan bones sitting in a museum somewhere that were found decades ago, but no one knew what they were. Or, now that we know what to look for, there might be more attempts at trying to find Denisovan remains in other places around the world.

There is still a lot more we have to learn and discover about the Denisovans and I’m sure there are more discoveries to be had in the future. At least we can be thankful that they were able to give us the finger.