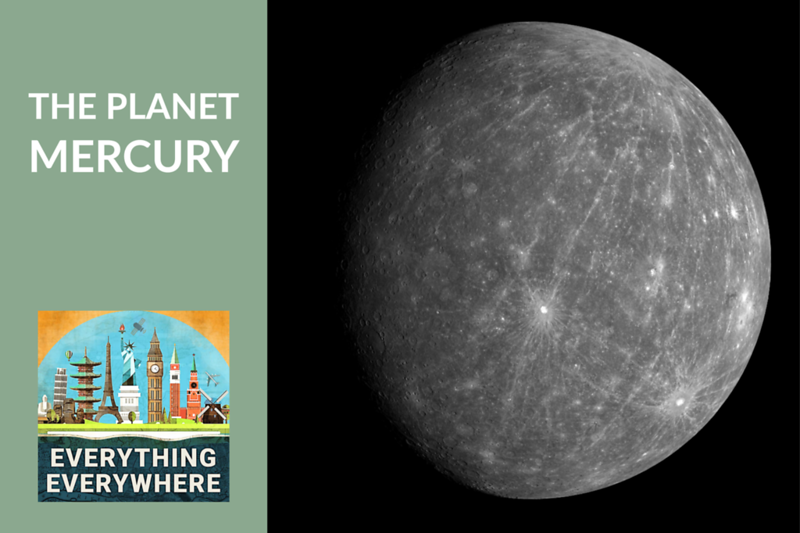 The planet Mercury is the smallest, fastest, and most pot-marked planet in our solar system. It is in many ways, unlike any other planet.

However, there is more to this overlooked planet than meets the eye. It isn’t just a scarred, hot rock near the sun. There are some things about it that I’m quite sure will astonish you.

Learn more about Mercury, the first planet, on this episode of Everything Everywhere Daily.

My audiobook recommendation today is The Planets by Dava Sobel.

In The Planets, Dava Sobel brings her full talents to bear on what is perhaps her most ambitious subject to date: the planets of our solar system.

The sun’s family of planets become a familiar place in this personal account of the lives of other worlds. Sobel explores the planets’ origins and oddities through the lens of popular culture, from astrology, mythology, and science fiction to art, music, poetry, biography, and history. Whether revealing what lies behind Venus’ cocoon of acid clouds or capturing firsthand the excitement at the Jet Propulsion Laboratory when pictures from Cassini at Saturn are beamed to Earth, this intimate account is filled with fascination, beauty, and surprise.

Of all the planets I could do episodes on, why did I choose to do one on Mercury?

I’ll admit it isn’t the sexiest planet. There is no atmosphere like Venus. It isn’t an object of exploration like Mars. It isn’t big like Jupiter and it doesn’t have the rings of Saturn.

I’m guessing most of you haven’t really given two thoughts about Mercury, and I’m reasonably confident in saying that because most space agencies and astronomers don’t really think about Mercury.

More on that in a bit. First, I should probably do a quick tale of the tape for Mercury.

The mass of Mercury is approximately 38% that of Earth. The planet has no discernable atmosphere which makes it more like the moon than any other body in the solar system.

Mercury is the second hottest planet in the solar system behind Venus. The only reason why Venus is hotter is that it has an incredibly thick atmosphere that traps heat. Mercury has no atmosphere.

Mercury was known to ancient people, but they didn’t really know much. Because of how close it is to the sun, it would only appear just before sunrise on the Eastern horizon or just after sunset on the western horizon.

The name Mercury came from the Roman god Mercury who was the messenger of the gods. In ancient China, it was known as the Hour Star, and in modern  Chinese, Korean, Japanese, and Vietnamese it is literally known as the “water star”.

The Maya people associated Mercury with an owl and thought it was the messenger to the underworld.

When telescopes were finally developed, our knowledge of Mercury didn’t really change much. Galileo was the first to observe Mercury through a telescope, and he found that like Venus, the planet went through phases.

The fact was, due to its proximity to the sun, Mercury was just difficult to observe. You have a very limited amount of time to observe it, and when you can, the sky is never totally dark.

One of the interesting things that astronomers calculated was the transit of Mercury. This is when Mercury can be observed crossing the sun. This is an uncommon occurrence, but not totally rare. It happens approximately 13 times every decade.

What is extremely rare is the occultation of Venus and Mercury. This is when Venus literally passes in front of Mercury as seen from Earth. This only happens every few centuries. It last occurred in 1737 and it will next occur in 2133.

When the space age finally arrived, Mercury wasn’t a high priority for exploration. There were two reasons for this.

The first was that it just wasn’t considered as interesting as other planets.

The second, larger reason, is that Mercury is really hard to get to.

If you remember back to my episode on how satellites work, tossing something into the sun is really hard to do. It is easier to leave the solar system than it is to fly into the sun.

Mercury is almost as difficult to get to as the sun, and the reason has to do with velocity. As you get close to the sun, its gravity increases the acceleration of a spacecraft. To get into the orbit of Mercury, you have to slow down. The problem is that because Mercury has no atmosphere, you can’t use it to slow down to reduce speed.

…and on top of that, it is just really hot near Mercury.

The first probe ever sent to Mercury was Mariner 10 which was launched in November of 1973.

The probe was designed to be a low-cost effort and it only cost $98 million dollars.

Because of the difficulty of getting into Mercury’s orbit, the mission was only a fly-by mission. The probe was sent to Venus for a gravitational assist and was then put in orbit around the sun such that it flew by Mercury.

It went into orbit around the sun in such a way that it was able to fly by Mercury a total of three times. Unfortunately, due to the way the orbits and rotation of the planet worked out, during each flyby Mercury was facing the same way each time.

The result was the first images of Mercury, but we were only able to get photos of about 45% of the surface.

Nonetheless, we learned a lot about the planet.

The big discovery was that Mercury had a magnetic field. It is only 1% of the strength of the Earth, but it is still there. It implied that Mercury probably has a liquid core just like Earth.

The other discovery was that Mercury might be shrinking. One of the surface features it found was called scarps. These are wrinkles on the planet. They weren’t like surface features seen anywhere else. Because Mercury has no tectonic activity, the conclusion was that as the interior of the planet is cooling, the surface contracted causing these features.

In 2004, the second, and most recent mission to Mercury was launched. It was known as MESSENGER which stood for Mercury Surface, Space Environment, Geochemistry, and Ranging. It was also a non to the god Mercury as well.

MESSENGER did manage to get into orbit around Mercury, but it was really difficult. It took six years to adjust its speed enough by flying past Earth and Venus before it was possible.

It finally entered orbit in 2011 and managed to map the entire surface of the planet before its mission ended and it crashed into the surface.

As of today, these are the only two missions ever sent to Mercury. There is another mission jointly run by the  European Space Agency and the Japan Aerospace Exploration Agency called BepiColombo. It was launched in 2018 and it is scheduled to reach Mercury orbit in 2025.

There are a couple of other things about Mercury that might surprise you.

One is that Mercury is high on the list of places in the solar system that people think could be colonized. Yes, the surface of the planet is hot enough to melt lead, but near the poles, the temperature is more moderate and it is suspected that like the moon, there might be patches of water deep in the craters of the polar region.

There also might be metallic ores on the surface which would also be another resource that could be used by people who landed there.

The other thing is an interesting fact that you might need to think about for a while before it makes sense.

However, this isn’t exactly how it works. The planets are always moving, and sometimes they are on the other side of the sun from each other. The planet which is the closest to any other planet changes over time.

If you were to ask what planet is closest to Earth, on average, most people would say Venus. At its closest point, Venus is closer than any other planet, but it’s moving, and when it is on the other side of the sun, Mercury is closer.

It turns out, if you average everything, that Mercury is more often closer to Earth than any other planet, simply due to how fast it travels around the sun.

The real head spinner is that Mercury is the closest planet to every planet in the solar system for this same reason. If this doesn’t make sense to you, there are some animations online that demonstrate why this is true.

As I stated at the start, Mercury isn’t the sexiest planet. It is a very hot rock whizzing around the sun which is very difficult to reach.

However, if you manage to go outside before sunrise or after sunset on the right day, you might be able to catch a glimpse of the Earth’s smallest and closest neighbor.