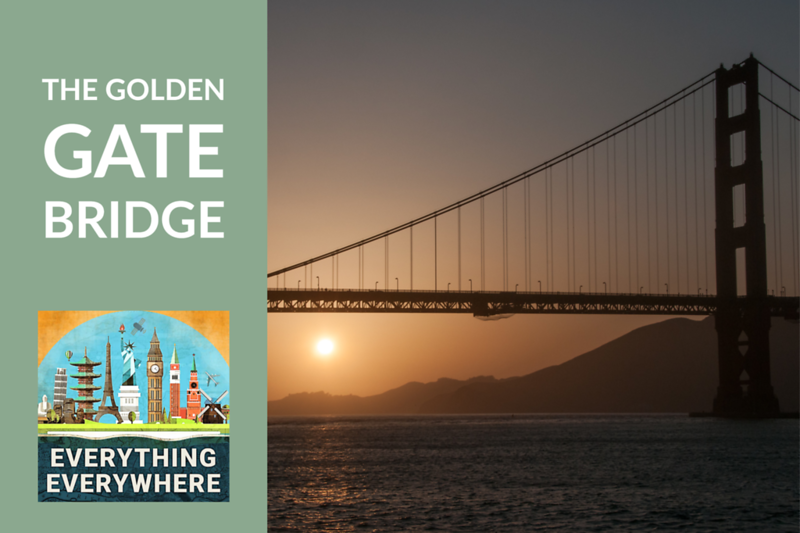 San Francisco Bay is one of the largest and best natural harbors in the world. The entrance to the harbor is a one-mile, 1.6 kilometer, wide straight called the Golden Gate.

Historically, getting from one side of the Golden Gate to the other was a time-consuming task. During the Great Depression, the problem was solved once and for all, by building the biggest bridge the world had ever seen.

Learn more about the Golden Gate Bridge on this episode of Everything Everywhere Daily.

San Francisco Bay is by far the best natural harbor on the west coast of North America from Puget Sound all the way down to Cabo San Lucas at the bottom of Baja California.

Even though native Ohlone people knew about the bay for millennia, it didn’t really come to the attention of Europeans until 1769. This is actually shockingly late considering that the Spanish had missions in California for centuries by this point.

It wasn’t as if Europeans hadn’t sailed ships up the coast of California before 1769. The most likely reason why no one ever sailed into the San Francisco Bay was simply that the entrance was fogged over.

The first recorded instance of someone seeing the entrance to the bay was Gaspar de Portolá, but he didn’t sail in.

It wasn’t until August 5, 1775, when Juan de Ayala became the first known person to sail through the Golden Gate.

The land was claimed by Spain, but the truth is they never really did anything with it. By the end of the 18th century, Spain had a very well-developed empire going all the way down to the southern tip of South America. As good of a harbor as it was, it just wasn’t important to the rest of Spain.

The area eventually became American territory after the Mexican-American War and the Treaty of Guadalupe Hidalgo.

It was under the United States that San Francisco really took off. It became the de facto capital of the west coast, especially considering its importance as the hub of the California Gold rush in the 1840s.

As important as San Francisco Bay was for shipping and the growth of California, it was also extremely frustrating for locals who lived in communities around the bay.

One service which started in 1867 was the Sausalito Land and Ferry Company which eventually became known as the Golden Gate Ferry Company.

By 1920, it was the busiest ferry service in the world servicing railroad cars and newly popular automobiles. Even though San Franciso wasn’t an island, its primary connection to the rest of the world, and the communities on the San Francisco Bay, was by ferry.

There had been talk about the creation of a bridge to directly connect San Francisco and Marin County by spanning the Golden Gate since the 19th century. This talk of a bridge was encouraged by the construction of the Brooklyn Bridge in 1883 which made the idea of such a bridge at least plausible.

The first real serious discussion took place in 1916. The San Francisco City engineer took a stab at estimating the cost of such a bridge. He came up with a price of $100 million dollars, in 1916 dollars. He, however, wasn’t a bridge designer, so he sent out his estimate to bridge architects to see if they could improve on it.

One of the only people who responded was a bridge designer named Joseph Strauss. Strauss’s original idea was for a giant bridge with two cantilevers, connected by a massive tower in the middle. His estimate for the project was only $17 million dollars.

Strauss’s design was rejected, but he was approved to be the lead designer for the bridge. It would consume the next 20 years of his life and would become his legacy.

The next 10 years were mostly fighting for approval and support, and battling the forces who didn’t want a bridge constructed.

The biggest opponents were the Southern Pacific Railroad, which owned the biggest ferry service, and the Department of the Navy. The railroad just didn’t want competition, and the navy was afraid of a ship hitting the bridge and sinking, blocking access to the bay.

Eventually, these objections were taken care of and federal land on either end of the Golden Gate was donated to make the project happen. In 1923, the California legislature passed the Golden Gate Bridge and Highway District Act which would be the legal entity that would construct and operate the bridge.

The name Golden Gate Bridge was the working name from the very beginning when Strauss was first in talks with the City of San Francisco.

A suspension bridge design was eventually settled upon, as advances in metallurgy made it possible to build a much longer bridge without the masonry towers that the Brooklyn Bridge in New York and the Roebling Bridge in Cincinnati have.

Joseph Strauss was the chief engineer, but he wasn’t responsible for everything. The art deco design of the towers was created by Irving Morrow, who actually designed homes. He also layout the lighting for the bridge and picked the orange color that it was painted.

The navy had originally suggested that it be pained black with yellow stripes.

Another engineer, Charles Alton Ellis, created the bridge within a bridge on the southern section. This is an arch that goes over the historic Fort Point. This was created specifically to protect the fort from demolition.

Funding for the bridge hit a major snag when the Great Depression started in 1929. The project was basically put on hold for several years until 1932 when the San Francisco based Bank of American purchased the entire $30 million dollar bond issue in an attempt to help the local economy.

Construction of the bridge began on January 5, 1933.

One of the innovations used on the bridge, and designed by Strauss, was movable safety netting. Bridges were notoriously dangerous. The safety netting managed to save the lives of 19 construction workers.

The 19 ironworkers who fell and were saved by the net created the Half Way to Hell Club.

11 men did die in the construction of the bridge, and 10 of those deaths occurred in a single accident. A scaffolding collapsed on February 17, 1937, and the safety nets couldn’t support all of the weight.

The bridge finally opened to the public on May 27, 1937. At its opening, it was the tallest and longest bridge in the world. A distinction it held until the 1964 opening of the Verazzano-Narrows Bridge in New York.

Perhaps even more impressive is that the bridge came in under budget and ahead of schedule.

Today the bridge is listed as part of US Highway 101, also known as the Pacific Coast Highway. However, technically, it is not. Legally, highway 101 ends just before the bridge and then starts again just on the other side of the bridge. This is mainly a legal jurisdictional issue and most native San Franciscans aren’t even aware of this fact.

The bridge is continuously being painted. The paint is the primary protection of the metal from the salt which is carried by fog and mist.

One of the biggest upgrades to the bridge occurred from 1982 to 1986. The original deck of the bridge was made out of concrete. However, after almost 50 years, the rebar in the concrete was starting to corrode from salt. Over a period of 401 evenings, without ever closing down the bridge, the entire deck was replaced with a steel Orthotropic deck that was 40% lighter and stronger than the original.

There is an average of 112,000 vehicles that pass over the bridge every day. The toll to cross the bridge for a passenger vehicle ranges from $8.05 to $9.05 depending on how you pay. Tolls are only collected on southbound cars. People escaping San Francisco can do so free of charge.

Today the Golden Gate Bridge has become an icon and one of the most well-known structures in the world. The American Institute of Architects listed it 5th on their list of America’s Favorite Architecture.

The bridge is perhaps the best-known and most photographed bridge in the world.

It has become a symbol not just of San Francisco, but of California, and of the entire United States.