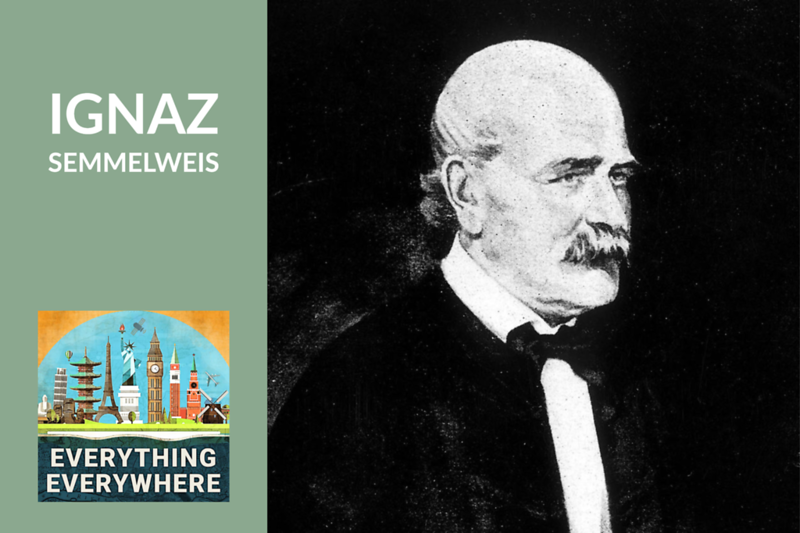 In the mid-19th century, a Hungarian physician advocated for an incredibly simple technique that would go on to save millions of lives.

However, when he first proposed it, his idea wasn’t just ignored, it was vehemently rejected by the very people who could have used it to save lives. Not only was the idea rejected, but he was ridiculed to a point that might have led to his early death.

Learn more about Ignaz Semmelweis and how no good deed goes unpunished, on this episode of Everything Everywhere Daily.

If you are a regular listener to this podcast, you definitely are a person who is intellectually curious. If that describes you, then you need to get a subscription to CuriosityStream.

CuriosityStream has documentaries on a wide variety of subjects covering almost everything you might have an interest in. You’ll find dozens of shows on economics, history, biology, technology, physics, culture, and philosophy.

Plus, they have tons of original programming which is being released on a regular basis.

Ignaz Semmelweis was born in 1818 in the town of Buda, Hungary, which is today part of the city of Budapest.

His family was ethnically German and his father was a well-off businessman.

As a young man, he attended the University of Vienna and intended to study law and after a year switched to medicine.

He received his medical degree in 1844 with an intent to specialize in internal medicine.

However, he was rejected at the clinic where he wanted a position and instead took a position at the Obstetrical Clinic at the Vienna General Hospital in 1846.

Before I go further, I need to explain the state of medicine at this point in history.

The mid-19th century didn’t have anything close to what we would consider modern medicine. The germ theory of infection still didn’t exist and many medical professionals still believed in things like miasmas and humors and would prescribe things like bloodletting to patients.

Also, at this time, the mortality rate for women in childbirth was significantly higher than what it is today. The primary cause of death was something called puerperal fever, also known as childbed fever.

It was a disease that would strike women within days of giving birth and it would often lead to raging fevers, putrid pus emanating from the birth canal, open sores in the abdomen, and finally sepsis and death.

The maternity wards at hospitals at this time in Europe were primarily for lower-class women and often prostitutes. The deal was that women who came to the hospital could receive free care, but their care would usually be overseen by students as it was a training hospital.

When Semmelweis arrived at Vienna General, it had two separate maternity wards that were run quite differently. One ward was run by male doctors and the other ward was run by female midwives.

However, the outcomes in the two wards were radically different. The ward with the doctors had a mortality rate that was five times that of the ward with midwives.

This condition of high maternity hospital mortality rates was the case all over Europe.

Semmelweis wanted to figure out why one ward had rates so much higher than the other. He tried to isolate a variable in what the midwives did that the doctors weren’t doing or vice versa. The two wards had operations that were mostly the same, but clearly, something was different.

Then he noticed that when a woman died of childbed fever, a priest ringing a bell would walk through the ward. He thought that this might have increased stress levels, so he got that to change….and again nothing happened.

The problem also couldn’t have been overcrowding, because the midwife ward always had more women than the doctor’s ward.

The breakthrough he was looking for came when one of his close friends died. He had been doing an autopsy on a woman who died from puerperal fever when a student accidentally nicked him with a scalpel. Several days later, he died with symptoms very similar to childbed fever.

What Semmelweis realized was that performing autopsies and handling corpses was something that the doctors did that the midwives didn’t do.

There was something on the cadavers that were passing the illness to the women. He did know what it was so he called them cadaverous particles.

His radical solution to this problem is one that revolutionized medicine. His instructions to the doctors in the hospital were to……..wash your hands.

Yep. That was his solution and the idea which changed medicine.

It doesn’t sound like a big deal to us because the idea of germs and cleanliness are so ingrained. However, back then, this really was a radical idea.

He didn’t just suggest that the doctors wash their hands, however. He recommended they wash their hands with chlorinated lime. The only reason he suggested this was because it was so effective at removing the horrible smell from cadaver tissue. He didn’t know how effective chlorine was as a disinfectant.

When the doctors implemented this handwashing regimen, mortality quickly dropped to levels on a par with the midwife ward.

Eventually, this was extended to washing all medical instruments, and childbed fever was all but eliminated in the hospital.

These results were circulated to other hospitals in Europe, but Semmelweis himself didn’t write anything.

If these results seem like very strong evidence in support of hand washing, it is. However, Semmelweis’s call for other doctors to start washing their hands was loudly rejected.

For starters, Semmelweis’s theory flew in the face of the way medicine was taught at the time and so there was a great deal of resistance to it. Semmelweis had no scientific explanation as to why it worked, he just knew that it worked.

Secondly, many doctors interpreted his findings to think that they were personally responsible for the deaths of their patients, which was something they resisted.

Finally, he was kind of the jerk about it. Rather than trying to persuade other doctors about his finding, it would often insult and berate them in public, making him enemies along the way.

In 1848, Semmelweis lost his job in Vienna, which may have been partially due to his personality, and partly due to the Hungarian revolution and the fact he was from Hungary.

He moved back to Budapest and in 1851 took an unpaid position at the obstetric ward of a small hospital. There too he managed all but eliminate childbed fever.

In 1855, he was appointed the head of the maternity ward at the University of Pest, and once again brought the mortality rate down to under 1% almost immediately.

Eventually, Semmelweis became absent-minded, suffered from depression, and began drinking. He published a book in 1861 and attacked his critics. He couldn’t hold a conversation with anyone without talking about childbed fever.

His behavior eventually became an embarrassment to his family and his colleagues.

He was committed to a mental institution where he died two weeks later at the age of 47, from an infection he received struggling with the guards.

It is believed that he may have had dementia, or could have suffered from syphilis, which many doctors who worked at free maternity wards often contracted.

After his death, mortality rates at the Pest University maternity clinic increased sixfold when the handwashing protocols were stopped.

Over time, of course, Ignaz Semmelweis was proven right. In the decades after his death, researchers like Louis Pasteur came up with the germ theory to explain why handwashing worked. Eventually, the actual bacteria that caused childbed fever was identified: Group A hemolytic streptococcus.

Believe it or not, handwashing is still an issue in some hospitals today. There are over 80,000 people who die each year in just the United States from hospital-acquired infections, and many of those could be prevented from improved handwashing protocols.

Today, Semmelweis is used as a case study in philosophy of science courses.

The Semmelweis Reflex is a name given to the tendency to reject new evidence or new knowledge because it contradicts established norms, beliefs, or paradigms.

Today, his work in developing antiseptic techniques has been acknowledged and celebrated. There is a Semmelweis University in Budapest, a Semmelweis Klinik for women in Vienna, and the Semmelweis Prize is the highest medical prize awarded in Hungary. He has been on stamps, coins, and there is even a minor planet named after him.

A film titled, “That Mothers Might Live”, won the Academy Award in 1938 for best short film. It is a 10-minute film that is available for free on YouTube.

What Ignaz Semmelweis did was science in its purest form. He identified a problem, tested different variables, hypothesized a solution, and then tested it several times.

Yet, his ideas were rejected because they flew in the face of what people believed.

The lesson of  Ignaz Semmelweis is that you have to trust the data, even if it flies in the face of conventional wisdom, and even if it is about something as simple as washing your hands.