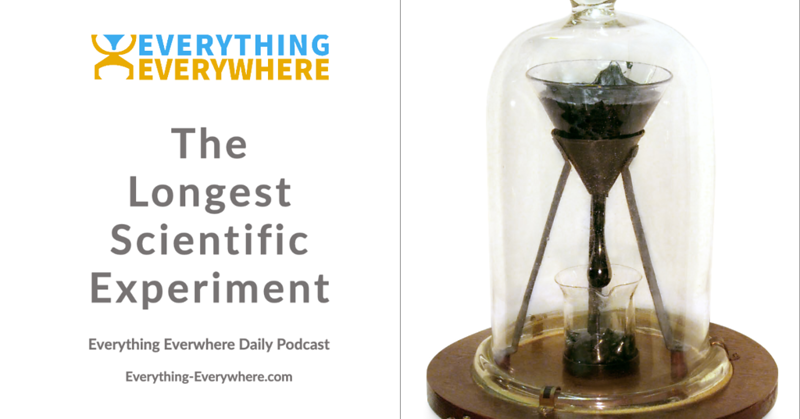 In 1927, Professor Thomas Parnell of the University of Queensland in Brisbane, Australia created an experiment to demonstrate to his students the concept of viscosity and how some substances which appear to be solids are actually liquids.

Learn more about the Pitch Drop Experiment, the world’s longest continuously running scientific experiment on this episode of Everything Everywhere Daily.

The concept of viscosity is one which mostly concerns physicist who are interested in fluid dynamics, but also one which can be easily comprehended from everyday experience.

Basically, the longer it takes something to pour, the higher its viscosity.

Viscosity can get much higher than something like ketchup. Things like peanut butter and toothpaste are technically fluids with very high viscosities. They are very resistant to flowing, but given enough time, they will flow.

At the very top of the viscosity scale, is pitch. Also known as bitumen and asphalt, it is an organic substance with an extremely high viscosity. If you were to pick it up, it would look and feel like a rock. Pitch is both naturally occurring and manufactured. On the island of Trinidad, there is a natural lake made out of pitch. You can actually walk on the Pitch Lake and you can feel yourself sinking in extremely slow motion. I know this because I’ve been there and actually done it. It’s a pretty cool experience.

This brings us to Professor Thomas Parnell which I mentioned in the intro.

Back in 1927, he wanted to conduct an experiment to show his students how certain substances that seem like solids are actually highly viscous fluids.

What he did was take a sample of pitch and heated it. When you heat pitch, it becomes much less viscous and pours more easily. He then filled a glass funnel that was sealed at the bottom with the pitch and let it settle for three years.

In 1930, after the pitch had settled, he broke the seal at the neck of the funnel to let the pitch start flowing. The funnel filled with pitch was then placed under a glass dome and put in a displace case outside the lecture hall.

The pitch began flowing out of the open end of the funnel……very……slowly.

Eight years after the glass was broken to allow the pitch to flow, the first drop of pitch fell from the funnel. It took eight years for a single drop to flow out.

Since 1930, the experiment has remained intact and the funnel still sits outside the lecture hall with pitch slowly flowing through it.

In 90 years, exactly 9 drops have fallen.

The average time for the first seven drops was approximately 8 years. However, sometime after the seventh drop in July 1988, the time between drops increased. The eighth drop occurred in November 2000, 12.3 years after the previous drop, and the ninth drop occurred in April 2014, 13.4 years later.

What had happened was that air conditioning was installed in the building, which lowered the average temperature the pitch was exposed to, increasing the viscosity.

The last drop actually occurred when the apparatus was moved to clean out the previously dropped pitch below, and the current hanging drop broke off.

The next, and tenth drop, is expected to occur sometime later this decade. It is estimated there is enough pitch in the funnel to last about another 100 years.

No one has ever actually seen any of the 9 drops take place. They have happened in the middle of the night, or at times when no one was looking.

In 2005, the experiment was awarded the Ig Nobel Prize in physics, which is a parody of the Nobel Prize.

The Guinness Book of World Records has also awarded it the record for ‘world’s longest continuously running laboratory experiment’.

Today, there is a webcam hooked up so you can actually watch the pitch drop in real-time. I would say it is like watching grass grow or paint dry, but both of those things are actually much much faster than flowing pitch.

After the 8th drop of the pitch in November 2000, they were finally able to calculate its viscosity. The value they came up with was that it was 230 BILLION times more viscous than water.

It should be noted that the University of Queensland is not the only long term pitch experiment in the world.

In October 1944 a similar pitch experiment was started at Trinity College in Dublin. No one is sure who started the experiment, and it was forgotten for decades with dust accumulating and no one paying attention to the pitch drops.

In April 2013, they noticed a drop forming, so they moved the apparatus and set up a webcam, and at 5:00 pm on July 11, 2013, the camera captured the first-ever pitch drop. They calculated their pitch was 30 billion times more viscous than water.

There are a few other long terms scientific instruments still in operation.

The most notable is the Oxford Electric Bell. It is a battery that is connected to a clapper which alternates between two charged bells. When it touches one bell, the charge switches and it moves to the other bell. The battery was set up in 1840 and it has been running for 170 years straight. It has been estimated that the bell has produced 10 billion rings since it started. Eventually, the battery will run out, but each movement of the clapper is extremely small, as is the amount of charge involved.

The tubes have been left alone for 148 years. Renovations to the room have built a walled-off compartment for the tubes and no one has touched it. It isn’t really an active experiment as there is no custodian and no one is taking measurements, but the liquids are still diffusing.

There is one more pitch drop experiment that was rediscovered at Aberystwyth (Aber-ist-with) University in Wales. This experiment actually dates to 1913, before the Queensland experiment, but was completely forgotten for a century. The pitch in this experiment hasn’t budged in over a century. It has only moved a few millimeters and hasn’t even gone out the funnel yet.

It is estimated it might take 1,300 years for the first drop to fall.