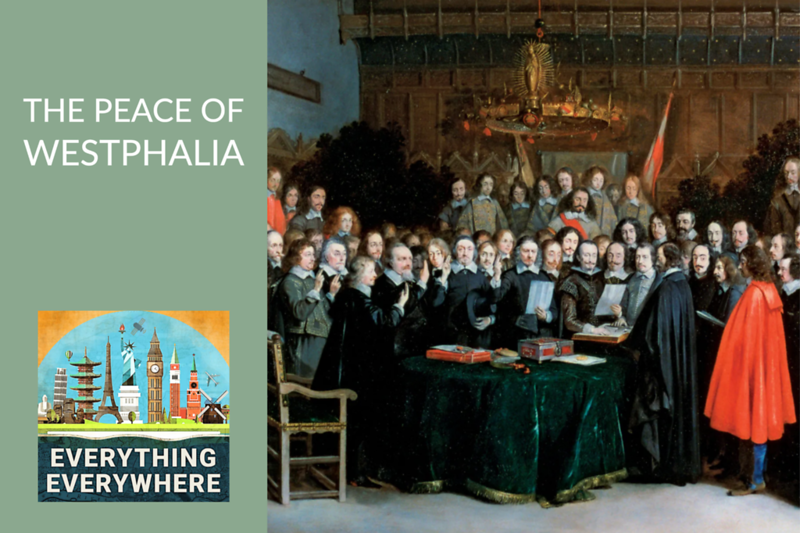 In 1648, Europe saw the end of two of the most horrific wars that had ever been seen on the continent up until that point.

The treaties which ended these conflicts established an international order which overturned the system which had existed for centuries and established a new order which in many respects, still exists today.

Learn more about the Peace of Westphalia and how its legacy can still be felt 350 years later, on this episode of Everything Everywhere Daily.

To understand how the Peace of Westphalia came about, we first have to understand the wars which necessitated the peace.

If you aren’t a student of medieval European history, many of the wars can get really confusing.

There were tons of kingdoms, principalities, and dutchies, many of which no longer exist anymore.

There are tons of kings, often with the same few names, Henry, Louis, Charles, and the wars were named based on how long they were.

The two particular wars in question were the Thiry Years War and the Eighty Years War.

The Eighty Years War is also known as the War of Dutch Independence.

The modern-day countries of the Netherlands, Belgium, and Luxembourg fought against the Hapsburg Spanish monarchy which controlled the region.

This war was a combination of a distant monarch who was far away in Spain, and primarily one of religion. Spain was staunchly Catholic, and various Protestant denominations had taken hold in the lowlands countries.

Over the years the war took probably around 200,000 lives on both sides.

The other war which was ravaging the continent, and which was much more devastating, was the Thirty Years War.

If you aren’t familiar with the Thirty Years War, it was probably the most costly war in Europe before the 20th century, even surpassing the Napoleonic Wars of the 19th century.

This too involved the Hapsburgs and the Holy Roman Empire, but it also involved an alliance of kingdoms and realms which spanned from Hungary to Sweden to the Netherlands and France. Pretty much all of Germany was involved on one side of the conflict or the other.

The main issue here was religion, with various rulers declaring themselves, and all of their subjects, as either Catholic or Protestant.

It is estimated that as many as 8,000,000 might have died in the conflict, with 30% of the entire population of Germany having perished.

Both of these conflicts are worthy of their own episodes, and I have them both on my big list of future episodes.

Suffice it to say that they were very long wars that killed a lot of people at a time when the population of Europe wasn’t that large, and it had a whole lot to do with religion, but not totally to do with religion. I’m massively oversimplifying, but that is the elevator pitch version of the wars.

By the time 1648 rolled around, everyone was exhausted and just wanted to put an end to the fighting.

Given the animosity which had built up, there were actually two different treaties that were signed and negotiated in two different cities, because the sides couldn’t agree on a single location to hold the talks.

One city was the Catholic city of Munster and the other was the Lutheran city of Osnabrück.  They are about 50 kilometers away from each other and they are both located in the region of Westphalia in northwestern Germany, not far from the modern border with the Netherlands.

Both cities were considered neutral territory for the duration of the negotiations.

The talks involved 109 delegates from all the various warring parties and took five years ago hammer out.

In the end, the three separate treaties were signed.

The Peace of Münster ended the Eighty Years War between Spain and the now recognized and independent Dutch Republic. This was signed on January 30, 1648.

These were The Treaty of Münster between the Holy Roman Empire, France, and the Dutch Republic.

The second was the Treaty of Osnabrück which ended the Thirty Years War. The primary signatories of this treaty were the Holy Roman Empire and Sweden, with other smaller allied states.

Many leading intellectuals of the time such as Gottfried Leibniz, Jean-Jacques Rousseau, Emmanuel Kant, and Friedrich Schiller felt that the Peace of Westphalia, which is the term used to collectively describe all three agreements, was a first step towards universal peace.

However, this episode really isn’t about everything I just described. The history of the wars and the signing of the treaty is really just a background for the real topic of this episode: Westphalian Sovereignty.

If you haven’t come across this phrase before, I wouldn’t worry about it too much. It is usually only used by political scientists or diplomats. It basically describes the currently legal international order with nation-states.

In fact, many have gone so far to say that the Peace of Westphalia basically created the modern notion of the nation-state.

To explain what that means, let me describe the state of affairs before the Peace of Westphalia and how the treaties changed that.

Prior to Westphalia, sovereignty was a very messy subject. There were overlapping rights to land, based on hereditary rule. The idea of sovereignty was, for the most part, based on individuals who claimed the right to rule from God.

How could the king be both an equal, and yet a vassal?

There were all sorts of these conflicting claims of sovereignty and loyalty all over Europe. A lord might owe allegiance to two different kings. Or, one king might have to pay taxes to some other king for some bit of land they inherited a century ago because of some marriage.

But who really held sovereignty over a region?

Was it a far away emperor, or some other ruler who actually lived there and managed the affairs of his land?

Did sovereignty and power lie in the larger, most abstract ruler, or in the more particular local ruler?

This all came to a head during the Protestant Reformation when some rulers became protestant and made their subjects join them.

On top of all this, there was the supernational institution of the Catholic Church. The pope claimed the right to appoint, or at least approve, monarchs anywhere in Christendom.

The Peace of Westphalia basically did away with most of that.

It established the idea that there are countries with borders, and how each country is run or administered within those borders is up to that country. No other country, emperor, or pope could dictate what that country did.

It also established that all countries were, at least in an international legal sense, equal. It didn’t matter if a country was run by a king, a prince, or a duke, or even if it was a republic. A country was a country.

There were still kings and emperors and princes to be sure, but now it just made everyone’s space on the map its own thing.

Of course, some people violently objected to the Peace of Westphalia, in particular, Pope Innocent X who issued a papal bull on the subject called Zelo Domus Dei. In it, he said it was “null, void, invalid, iniquitous, unjust, damnable, reprobate, inane, empty of meaning and effect for all time”.

Pretty much everyone in Europe ignored the papal bull, and it marked the start of the decline of the papacy as a political force.

If this sounds sort of common sense, and the way the world just works, it wasn’t necessarily at the time.

The idea of Westphalian Sovereignty wasn’t created out of some philosophical treatise, it was really just a reflection of the reality on the ground.

The idea of Westphalian Sovereignty also isn’t explicitly listed in any of the treaties, it was just the system that resulted from the Peace of Westphalia.

The idea wasn’t fully formed after the signing of the treaties, but it grew and evolved over time. It didn’t stop countries from going to war, but it did change the nature of those conflicts and the nature of how states interacted with each other.

Probably the biggest exception to Westphalian Sovereignty was the colonial system, where colonies were not legally equal to their colonizing country.

Even then, if you look at almost every colony which was established by a European power, the way they were administered was very different from how vassal states were run before Westphalia.

Colonies, whether they were British, French, Spanish, or Dutch, were all centrally administered, and usually weren’t set up with local dukes, princes, and barons.

In fact, the entire history of decolonization, when looking at it through the lens of Westphalian Sovereignty, was simply former colonies trying to achieve legal and diplomatic equality with their former overlords in a Westphalian framework.

There is probably no greater expression of Westphalian Sovereignty than the Charter of the United Nations which explicitly states that all members are equal and that “nothing … shall authorize the United Nations to intervene in matters which are essentially within the domestic jurisdiction of any state.”

….unless you are talking about the Security Council, in which case some countries are more equal than others.

If you think back on the history of the world over the last 120 years, there have been many horrendous things that have happened. The biggest almost always stemmed from some country invading some other sovereign country.

Civil wars and conflicts within countries usually don’t receive the same level of world attention, unless some other power tries to interfere.

Since the end of World War II, open warfare between sovereign countries has become much rarer than it was beforehand.

My thinkers on the subject have claimed that we have either gone past Westphalian Sovereignty, or we should.  To be sure, there are institutions like the UN, the International Criminal Court, and other multinational organizations, but they are all voluntary.

Other than trying to physically or financially coerce another country, there really isn’t anything you can do.

So, when you are watching the news or hear a story about relations between countries, realize that the system of international relations all stems from a system that was developed to 1648 to stop one of the worst wars in history at that time.

I have some more Bootagrams to share with you. Remember, a boostagram is sending me satoshis via a modern podcasting app you can find at newpodcastapps.com

Thanks, Dave. I think, especially for Americans, the first world war really gets overlooked, yet it was just as important for shaping how the 20th century unfolded as the second world war, and there are clear lines linking the two wars together.

New listener Dreb Scott send me a massive 11,111 sats from my episode on Roman Naming Convents. He wrote: Enjoyed this. Found you from your Boostagram to the Podcasting 2.0 podcast. I have subscribed and will definitely be hitting up your back catalog.

He then sent another boost of 3222 sats from the episode on Joseph Bonaparte: The King of New Jersey. He added I’m really enjoying this podcast.

Thanks, Dreb. In addition to asking for listeners to send in boostagrams, I also support the podcasts I enjoy listing to as well.

If any of you are curious how you can send me a Boostagram, just do a search on “podcasting boostagram” and you can easily find information on how to do it. There are currently almost 5,000 podcasts set up to receive Boostagrams from listeners.