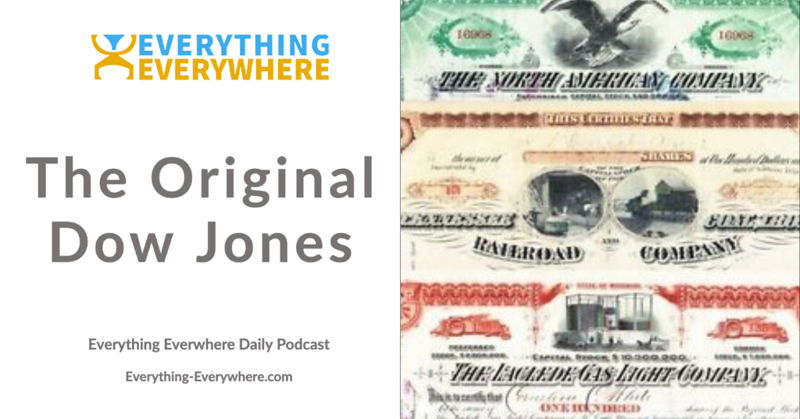 The index was created in 1896 and back then there were only 12 stocks in the index, and most of them are no longer household names.

Learn more about the original companies which made up the Dow Jones Industrial Average and what happened to them over the last 125 years on this episode of Everything Everywhere Daily.

If you ever see a report on how the stock market is doing in the United States, it will probably be quoting the value of the Dow Jones Industrial Average.

The Dow Jones is an index of the stock prices of 30 large American companies. While it is used to reflect the relative health of the economy, it was never really designed to do that.

The index isn’t weighted by market cap, so the price of the stocks of all 30 companies is treated equally, even though the companies may be of vastly different sizes.

Likewise, the index isn’t adjusted for inflation, and poorly performing companies are removed and replaced ever few years.

First calculated on May 26, 1896, it is the second oldest stock index in the United States. The oldest being the Dow Jones Transportation Index, which dates back to 1884 and was created to show the health of the railroad industry.

The industrial index was created by Charles Dow, who was the editor of the Wall Street Journal, and Edward Jones, who was a statistician.

In the first 1896 iteration, there were only 12 stocks listed. The stocks are mostly ones you haven’t heard of, but were representative of the economy at the time.

Each of the 12 stocks has a really interesting story, and 11 of the 12 companies actually still sort of exist in some shape or form.

So, here are all 12 of the original Dow Jones Industrial Average companies from 1896 and what became of them.

American Cotton Oil –  In the 19th century, cotton mill owners began consolidating and they eventually created a trust which dominated 80% of the industry. The fortunes of the company started going south and was acquired by Best Foods in 1931. Best Foods merged with Corn Products Company in 1958, which later split into Ingredion and Bestfoods in 1997. Bestfoods was then purchased by Unilever in 2000.

American Sugar Refining Company  – The company was created in 1891 when the Sugar Refineries Company, also known as the Sugar Trust, was broken up by the Sherman Anti Trust Act of 1890. In 1900 they changed their name to Domino Sugar, which is still a brand that exists today, and there is still a famous landmark sign for Domino Sugar in Brooklyn. In 1970 the company changed its name to AmStar, and in 1983 it was purchased in a leveraged buyout by KKR, who then turned around in 1986 and sold it to Merill Lynch, who then sold it to Tate & Lynch, a British company, who then sold Domino Sugar to a cooperative of Florida sugar producers who now run the company under the name ASR Group, which stands for American Sugar Refining, the exact same name it had back in 1896.

American Tobacco – If you want to put things like ethics and morals aside, then having a monopoly in an addictive substance has to be one of the best economic models in the world. This is exactly what American Tobacco was in 1896. In 1907, the company was found to be in violation of the Sherman Act and was broken up and split into several different tobacco companies, one of which kept the original name. The company returned to the Dow Jones index from 1924 to 1930 and again from 1932 to 1985.

In 1990 the tobacco assets were purchased by British American Tobacco, who merged the major brands into their Brown & Williamson division who merged with R.J. Reynolds in 2004.

The non-tobacco parts of the business now operate under the name  Fortune Brands,

Chicago Gas Company – They didn’t last long as they were absorbed by Peoples Gas Light & Coke Company in 1898. Peoples lasted quite a while and were purchased by Integrys Energy Group in 2007, who was then purchased by WEC Energy Group in 2015. Despite acquisitions and mergers, the company still basically does the exact same thing it did in 1896.

Distilling & Cattle Feeding Company –  Known as the Spirits Trust, this company was the creation of many of the largest distilling companies. At one point they were responsible for 90% of alcohol consumption in the United States. Soon after being listed, they changed their name to American Spirits Manufacturing and later National Distillers. During and after prohibition, they got involved in more chemical manufacturing and in 1957 changed their name to National Distillers and Chemical Corporation, 1987 they spun off their alcohol business into Jim Beam Distilling, and renamed the company Quantum Chemical. Quantum Chemical was then purchased, spun off, and eventually, remnants are now in the hands of German company HeidelbergCement.

General Electric – If there is one company from the original 1896 list that you’ve heard of, its General Electric. GE is still around today, the same company from 125 years ago. Since its original founding by Thomas Edison, it has become a massive conglomerate covering many different businesses. They were only removed from the Dow Jones in 2018, and in 2020 sold off their light bulb business, which was their original reason the company was founded.

Laclede Gas – A natural gas company operating out of Missouri, it wasn’t on the list very long. It began buying and merging with a series of local gas companies in Missouri, never changing the name of the business. In 2001 it became the Laclede Group, and in 2017 changed its name to Spire. Despite the name changes, it is the exact same company and it is one of the longest continuously traded stocks in the country.

National Lead – Originally part of the Lead Trust which was broken up in 1891, National Lead came out of it as the largest lead company in the US. They created the popular brand of paint Dutch Boy in 1907. They changed the name of the company to NL Industries in 1971, which they still operate under today. Their paint business was sold to Sherwin Williams in 1980.

North American Company – This very generically named company was a holding company for industrialist Henry Villard and only lasted 3 months on the original index. The company amassed a collection of utility companies around the country and was eventually broken up by the Securities and Exchange Commission in 1946. Many utility companies that exist today can trace their roots back to the North American Company, including Pacific Gas & Electric and Wisconsin Energy Group.

Tennessee Coal Iron and Railroad – The company, based in Tennessee as you can guess from its name, stayed on the list until 1907 when the economic crisis of that year allowed it to be purchased by J.P. Morgan and U.S. Steel. US Steel changed its name to USX in 1986. There is a factory originally built by the original company which is still operating in Fairfield, Alabama.

United States Rubber – It was created in 1892 after the merger of nine rubber companies in Naugatuck, Connecticut. In addition to tires, they also produced the first sneaker back in 1916 under the brand Keds, as well as other rubber products. They merged with Uniroyal in 1961, and then with B.F. Goodrich in 1986. The French company Michelin purchased them in 1990, and that is where the assets exist to this day.

So as you can see, most of these companies have led very circuitous lives since they were put on the Dow Jones Industrial Average in 1896.

One question which is often raised is, how much an investment in the specific companies on the index in 1896 would be worth today? The answer really can’t be calculated. Some of the stocks are rather easy to track, but some are impossible to figure out because they diversified, spun-off units, or were taken private.

Suffice it to say that an investment back then would have paid off handsomely, and any such investment would have led to substantial stakes in some of the largest companies in the world today.