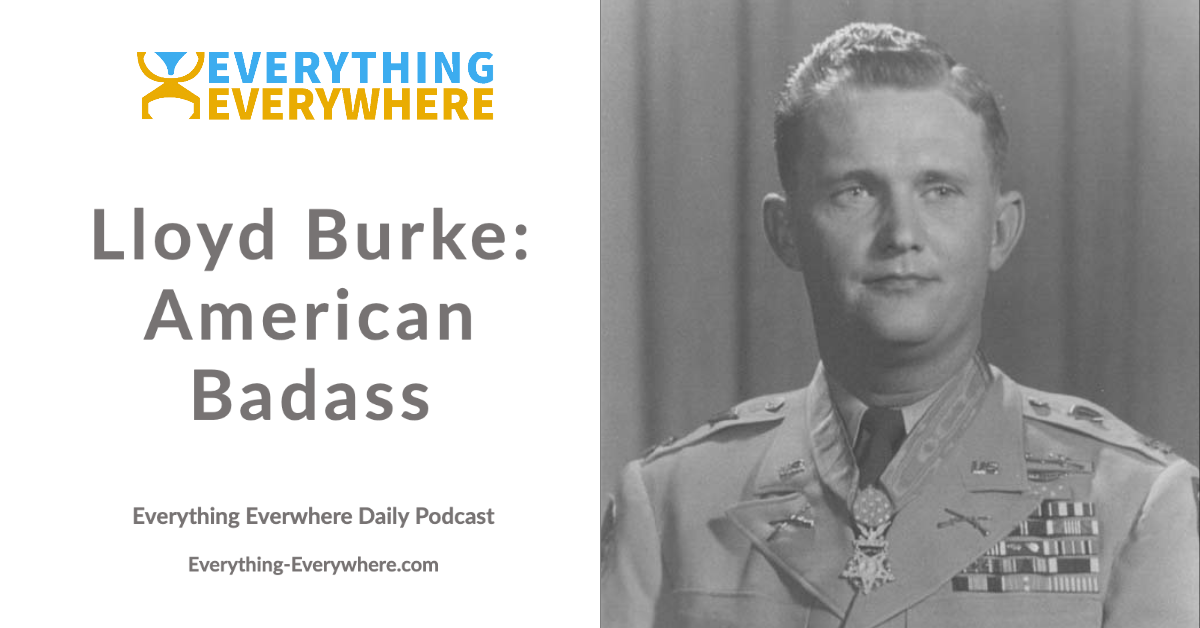 The highest and most prestigious award in the United States military is the Medal of Honor. It is awarded for only acts of extreme valor and bravery. Established during the Civil War in 1863, it has been awarded 3,506 times.

If you read through the list of Medal of Honor recipients, you will read stories of heroism, honor, and sacrifice.

Of all of the Medal of Honor winners, there was one recipient’s story which really stood out to me. It went beyond bravery and valor to just genuine badassery.

This is the story of Lloyd Burke, an otherwise mild mannered man who in one five and a half hour period became superman. Learn about his story on this episode of Everything Everywhere Daily.

Lloyd Burke was a mild mannered 1st Lieutenant from Arkansas. Having served in WWII with an engineering corps in Italy, he returned home to attend college and the ROTC at Henderson State University.

After graduating, he accepted his officer commission and was sent to Korea in 1950. During his tour of duty, he earned the Distinguished Service Cross, two Bronze Stars, and two Purple Hearts.

However, this story surrounds the events of October 28, 1951. On this day, Lloyd Burke became Captain America. It is almost hard to believe what he did because it reads like the script from an action movie.

I’m going to be reading directly from a public domain retelling of Burke’s actions that day, because I don’t think I can necessarily tell it better.

Burke’s tour of duty was almost over in October 1951. At the time, Burke was found at the rear of his regiment. He had a plane ticket in his pocket and was eager to see his wife and infant son. 2 miles (3.2 km) away, Burke’s company was attempting to cross the Yokkok-chon River. The company was hindered by a large and well-entrenched Chinese force on Hill 200. The battle raged for days, with the 2nd Battalion’s attacks being constantly repulsed. At first, Lieutenant Burke kept up with the reports. Eventually, he could no longer remain on the sidelines. As he himself stated, “I couldn’t see leaving my guys up there without trying to do something.”

When Burke was at the base of Hill 200, he was shocked to witness his company’s strength reduced to 35 traumatized survivors. Burke described the condition of his company:

These men were completely beat. They lay huddled in foxholes, unable to move. They all had the thousand-yard stare of men who’d seen too much fighting, too much death.

Burke dragged up a 57 mm recoilless rifle and shot three rounds at the closest enemy bunker. The bunker itself was a wooden-fronted structure covering a cave, which was dug into the overall hillside. The Chinese attacked American troops by hurling grenades from their trenches. Burke aimed his M1 rifle at the trench line and shot at every Chinese soldier who rose to throw a grenade. Unfortunately, the grenades were still being thrown. After firing an eight-round clip, Burke decided to take more drastic measures. As he recalled, “I considered myself a pretty fair shot, but this was getting ridiculous. I had to do something.”

After laying down his rifle, Burke took a grenade and ran approximately 30 yards (27 m) to the Chinese trench line. He avoided enemy fire by hurling himself at the base of a dirt berm that was 2 feet (0.61 m) high. When the Chinese momentarily stopped firing, Burke jumped into one of the trenches with a pistol in one hand and a grenade in the other. He shot five or six Chinese soldiers in the forehead. Burke also fired at two Chinese soldiers from further down the trench. Afterwards, he threw his grenade in their direction, jumped out of the trench, and placed himself against the dirt berm. The Chinese were aware of Burke’s location and began throwing grenades at his position. Most of the grenades thrown rolled down the hill and harmlessly exploded. Some of the grenades, however, did explode near Burke. He managed to catch three of them and toss them back at the Chinese. At the same time, troops from Burke’s company threw grenades. However, some of those grenades exploded near Burke.

Burke abandoned the dirt berm by crawling off to the side, where he found cover in a gully. The gully itself ended further up Hill 200 at a Korean burial mound. After edging his way up the hill, Burke peeked over the top of the burial mound. He saw the main Chinese trench, which was approximately 100 yards (100 m) away. The trench was covered in enfilade, was curved around the hill and contained many Chinese troops. Surprisingly, the Chinese were relaxing, with some of them talking, sitting, and laughing, while others were throwing grenades and firing mortars. Burke went down the gully to Company G’s position and told Sergeant Arthur Foster, the senior NCO, “Get’em ready to attack when I give you the signal!” Burke then dragged the last functioning Browning model 1919 machine gun and three cans of ammunition back up the hill. On top of the burial mound, he mounted the machine gun, set the screw to free traverse, and prepared his 250-round ammunition box. He began firing at the nearest part of the Chinese trench where the mortars were located. After Burke shot at all of the Chinese mortar squads, he then fired upon a machine gun emplacement. Afterwards, Burke fired up and down the trench at Chinese soldiers too shocked to react. Eventually, the Chinese fled down the trench in a panic. Burke continued to fire until his Browning jammed. While he attempted to clear his weapon, an enemy soldier started throwing grenades at him. Burke not only ignored this, he also ignored the grenade fragments that tore open the back of his hand. Eventually, Burke was able to clear his weapon and kill the Chinese grenadier.

Meanwhile, Sergeant Foster led a small group to Burke’s location and was told by Burke to provide extra firepower. Burke and the others were convinced that they were under siege from a full-sized force instead of a few adamant skirmishers. As the Chinese retreated, Burke wrapped his field jacket around the Browning’s hot barrel sleeve and tore the 31-pound weapon off its tripod. He then wrapped the ammunition belt around his body, walked towards the trench, and fired upon retreating units. Foster and his men followed. When Burke ran out of Browning ammunition, he used his .45 automatic and grenades in order to clear out bunkers. At Hill 200, Burke killed over 100 men and decimated two mortar emplacements and three machine-gun nests. For his actions, he was awarded the Medal of Honor at a White House ceremony on April 11, 1952.

It is almost hard to believe that this happened. Expert marksmanship, catching and returning live grenades, grabbing a machine gun like Rambo, and throwing himself very much in harm’s way.

I’m shocked that a movie has never been made about this. The script writes itself.

Lloyd Burke went on to serve in Vietnam leading  regiment of Army Rangers. After he was shot down in a helicopter, he suffered a long hospital stay and after which he served as the Army’s liaison to the United States Congress. He retired at the rank of full colonel in 1978.

Burke passed away in 1999 at the age of 74 and was buried with full military honors at Arlington National Cemetery.