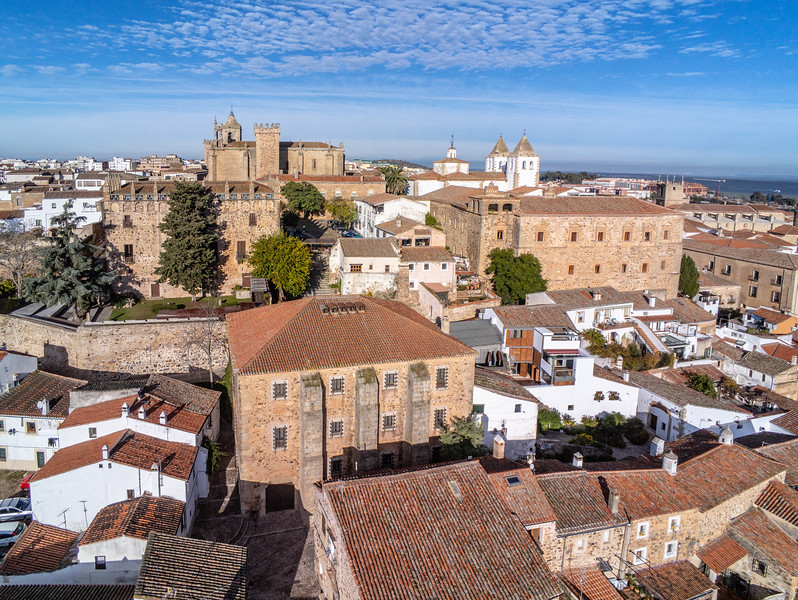 From the Old Town of Cáceres World Heritage inscription:

The Old Town of Cáceres is an urban ensemble of 9 hectares surrounded by a wall of 1,174m, located in the Autonomous Community of Extremadura in the southwest of the Iberian Peninsula.

Cáceres has been a trade route city and a political center of the local nobles for many centuries. Since prehistoric times, people from different cultures have gathered in Cáceres and have shaped its strong historical roots. Pre-Roman settlements occupied the original plot followed by the Roman, Arab, Jewish and Christian people.

The influence and remains of these cultures can be observed and studied in the walled ensemble of Cáceres, with a wide typological and constructive variety ranging from popular architecture to palace-houses, with their characteristic sobriety and towers of the nobility of Gothic and Renaissance times. The city’s history of battles between Moors and Christians is also reflected in the architecture, which is a blend of Roman, Islamic, Northern Gothic, and Italian Renaissance styles. This property also includes noteworthy religious buildings such as churches, hermitages and convents.

I visited Cáceres in late 2018 and spent several days in the old section of the town visiting the historic sites, walking the city walls and learning about its heritage.

Cáceres doesn’t get the attention which other historic cities in Spain such as Madrid, Barcelona, or Seville get, but it probably should be considered in the same league.

The history of the city of Cáceres dates back to prehistoric times. There is evidence of cave paintings in the area from early humans. However, most of the structures which exist in the city today are Italian Renaissance style buildings which date back to the 15th Century.

Elements of the Islamic period can be found if you look closely, however. There are inscriptions in Arabic on the city walls, and the giant water cisterns under the town also date back to the Moorish occupation of the town.

Almost all of the attractions in Cáceres are historical in nature and focus on the history and cultures of the people who lived in the city.

The Palacio de Golfines de Abajo is a palatial home of one of the foremost families in the city of Cáceres and was built immediately after the reconquest of the city from the Moors. The family owned the building from the 16th Century until the 21st Century. It was where the Catholic monarchs of Spain stayed when they were in Cáceres. The palace was turned into a museum when the last surviving member of the family died without any heirs. Today it is a museum showing many of the artifacts, artwork, and furnishing which were owned by the family.

All visits to the palace are guided tours. General admission is €2.5, with admission for seniors €1.50, and children under 8 free.

The palace is closed Mondays. Check the website for the times which the guided tours start. They have different times in the summer vs the winter, with a special schedule on Sundays.

Prior to the expulsion of Jews from Spain in 1492, Cáceres had a vibrant Jewish community. The homes occupied by Jewish residents were abandoned and taken over by Christians. Today the Jewish Quarter is preserved to commemorate the Jews who lived in Cáceres. There is a small museum in the old synagogue and if you look closely, you can see where the mezuzahs were located on many of the front doors of the houses.

While not the cathedral or the most significant church in Cáceres, the church of-of Iglesia de San Francisco Javier is probably the most notable as it overlooks the Plaza de San Jorge. You can enter the church and climb its towers for only €1.00.

The signature feature of the Cáceres cathedral is the massive wooden altarpiece. The entire work extends up the back wall of the church and almost reaches the ceiling. There is also an exquisite carving of a Black Christ in a side chapel in the church. Entrance to the cathedral is €1.00 if you are not attending a church service.

You can get a lot of good photos by just wandering around the streets of the old town. I’d suggest going to the city walls at sunset to catch the light on the tops of the buildings. Also, leaving the old part of town and crossing the small stream outside of the walls gives you a great view of the entire old town plus its walls. It is a short walk and can easily be done on foot.

Atrio is probably the best restaurant in Cáceres. It is a Michelin two-star restaurant and is associated with the five-star hotel (see below). The incredible part about Atrio is its wine cellar which is one of the best in the world. They have one of the world’s oldest bottles of wine in their cellar which is over 200 years old. It can be yours for the low price of only €600,000.

Hotels in Atrio Restaurante Hotel
The Atrio Hotel is a 5-star hotel and is associated with the Michelin Star Atrio Restaurant. It has modern decor and is centrally located in the old town. It is also the most upscale hotel in the city.

Hotels in Parador de Cáceres
This is where I stayed in Cáceres. It is right in the middle of the old part of town, and the Parador is a chain of hotels in Spain which mostly are located in historic buildings. There is limited parking available behind the hotel near the rear entrance. Everything in the world heritage area of Cáceres is within easy walking distance of the Parador.

NH Collection Cáceres Palacio de Oquendo
This is the most affordable of the hotel options in the old town of Cáceres. I did a site inspection of the hotel and had lunch on the property. Everything is clean and affordable and probably where I would stay if I were to return. It is also located right on the Plaza Mayor and near the walls of the Old Town.

The closest international airports to Cáceres are in Madrid, Seville, and Lisbon. Driving time from each airport is approximately 3-4 hours.

The closest domestic airport would be in the city of Badajoz which is 90km away.

Cáceres is connected to the rest of Spain by major highways and it is easy to reach by car. Drive times from international airports are as follows:

Busses go from Madrid to Caceres daily from the Estación del Sur in Madrid.

Cáceres has a moderate climate and it will seldom snow in the winter.

Average temperatures range from 50F/10C in January to 79F/26C in August.