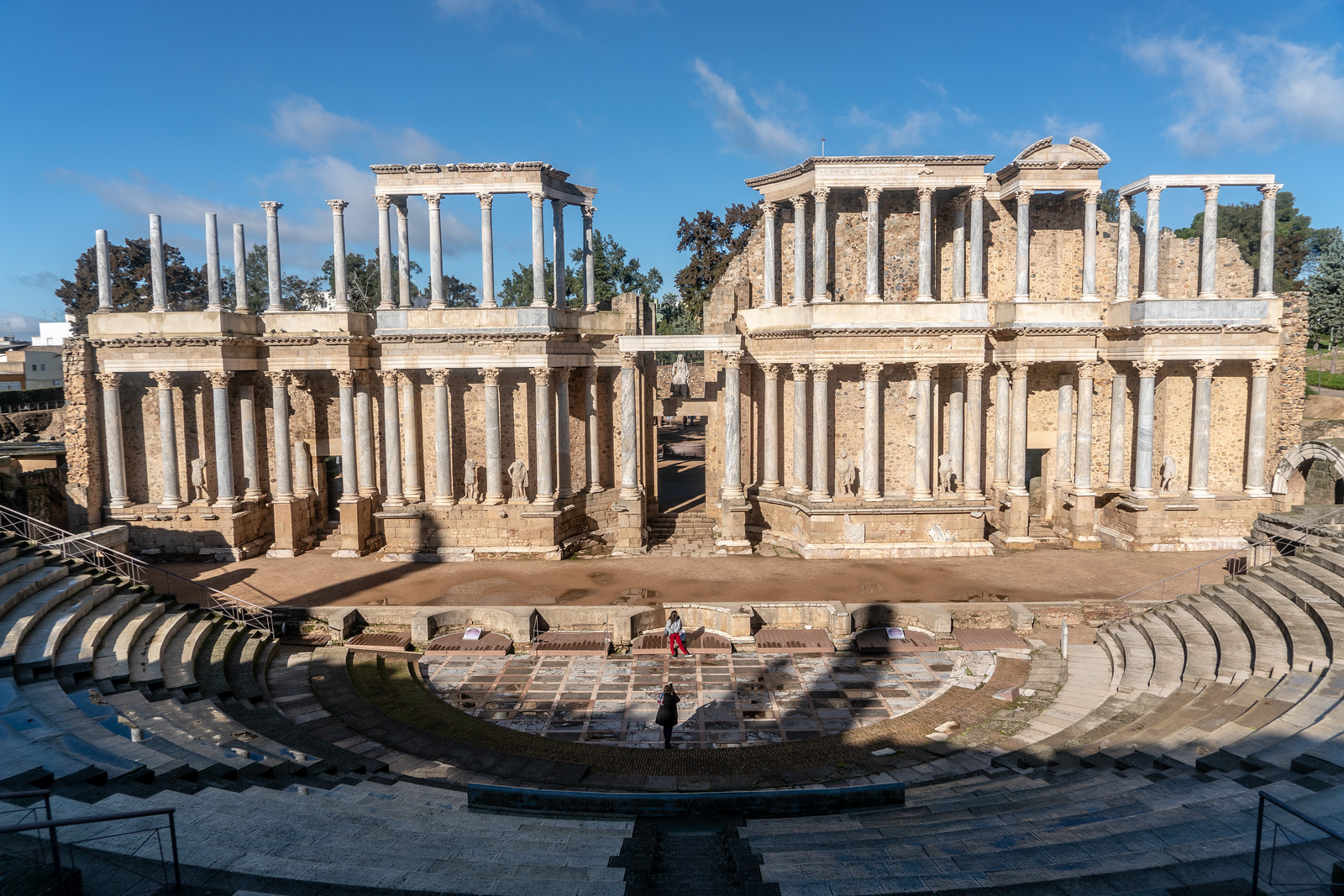 From the Archaeological Ensemble of Mérida World Heritage inscription:

Mérida is a city in the Extremadura region of Spain with a population of 60,000. The city was originally founded as a Roman colony and it is best known of its Roman ruins.

The Roman ruins in the city are probably the best in the entire Iberian peninsula and among the best in the world. In addition to the signature Roman theater (see above), there is also a well-preserved aqueduct, one of the longest Roman bridges in the world, an amphitheater, arches, and a circus. The museum of Roman artifacts is one of the best museums of its kind that I have ever seen in the world.

Mérida should easily be on any list of top places in the world to visit to see Roman ruins and artifacts.

The modern-day city of Mérida was founded as the Roman town of Emerita Augusta in 25 BCE. “Emerita” is Latin for “veteran” and it is the root word for the modern English word “emeritus”. Augusta comes from Emperor Augustus who founded the city. This was the city for the veterans who served under Emperor Augustus who were promised land as a reward for their service to Rome. The modern name of Mérida is derived from the Latin name for the city, Emerita.

The modern city of Mérida is laid out on top of the ancient Roman city and follows much of the same layout that the Romans created. While the city is much larger today, evidence of the Romans can be seen all over town.

There are several notable Roman ruins and attraction which should be seen on any visit to Mérida. Most of them could probably be seen in one full day, but two days would be optimal to make sure you see everything.

The amphitheater is not as large as what you will find in places such as Rome, Verona, or Arles, but it served the same purpose. It was a place for gladiatorial games where men and animals would fight each other. The amphitheater is located adjacent to the Roman Theater and they are both included in the same entrance fee.

The theater is one of the best preserved Roman theaters in the world. This is due to the fact that it was buried for centuries on the orders of a local bishop. When it was excavated, much of the columns and artwork was in pristine condition. There are still events which are held at the theater and if you are there on the right day you can attend a concert.

The museum isn’t just a fantastic collection of Roman art and artifacts, the museum building itself is a great work of architecture. Viewing the collection can easily take half a day if you try to see everything. In addition to the collection, there are ruins which can be found below the museum. You should make sure not to miss this as it is easily be forgotten as you are viewing all the art.

The temple is located in the middle of town and it can easily be visited on foot from the theater and amphitheater. The temple has a Rennisance era villa inside of it which was built as a palace for the Duke of Corbos in the 16th Century. Even though the villa is not from the Roman period, it was decided to leave it as it is part of the history of the location.

The Casa del Mitreo is one of several Roman homes which are located below the municipal building in Mérida. It is located along the river, not far from the Roman bridge. The Casa del Mitreo itself has well-preserved floor mosaic as well as the outlines of many of the walls.

A single entrance is €6 or it is included in the €15 all-access pass.

The circus is where chariot races were held. It was the Roman version of a race car track. The circus is located outside of the old, Roman part of town but surrounded by what is today a residential neighborhood. The outline of the circus is still visible and there is a monument located in the middle of the track.

The Roman bridge is the longest existing Roman bridge in the world. The bridge was the original reason why the city was founded at this location. The city was designed to protect the bridge over the Guadiana river, and one of the end points on the Vía de la Plata.

The aqueduct brought water to the city of Emerita Augusta. It has long since ceased functioning, but the original structure brought water from the hills over 20 miles away. The largest part of the aqueduct is outside of the old town and is in a public park. There is no fee to visit and walk around the ruins.

The Arch of Trajan is one of the smaller structures in Mérida, but one of the most impressive. It is located in the middle of town. The arch itself is pretty well preserved and extends over the modern day street of Calle Trajano.

The Roman baths are located in the town of Alange, which is approximately 30km outside of Mérida. The baths were built on a hot spring and were originally built by the Romans. It still functions as a spa today and there are parts of the original Roman structure which can be seen. As it is a separate facility, the fees to enter are separate from any of the other attractions. The fee for the spa circuit is €35 which takes about 2 hours. A cheaper tour of the facility where you don’t enter the water is also available. Note: there was almost no English spoken by any of the staff and the tours are only offered in Spanish.

There is a lot to see in Media, and much of it is surrounded by modern buildings. I’d suggest getting up in the morning to photograph the places which don’t have an entrance fee or entrance times. This would include the Aqueduct, the circus, the Temple of Diana, and the bridge.

Then go to the Roman Theater and the amphitheater when it opens at 9am. This will give you the best light for both places, especially the theater, which is the showpiece of Mérida.

Go to the museum and the Casa del Mitreo when the sun is highest and in the mid-afternoon. Both are either indoors or are covered and do not get direct sunlight. Remember that lunch is eaten very late in Spain, usually at least at 2pm.

The closest international airports to Mérida are in Madrid, Seville, and Lisbon. Driving time from each airport is approximately 3-4 hours.

The closest domestic airport would be in the city of Badajoz which is 70km away.

Mérida is connected to the rest of Spain by major highways and it is easy to reach by car. Drive times from international airports are as follows:

There are 6 daily buses which go from Madrid to Mérida each day. Ticket prices are approximately $35 one-way. There are also buses available on a daily basis from Lisbon and Seville.

Mérida has a moderate climate and it will seldom snow in the winter.

Average temperatures range from 50F/10C in January to 79F/26C in August.