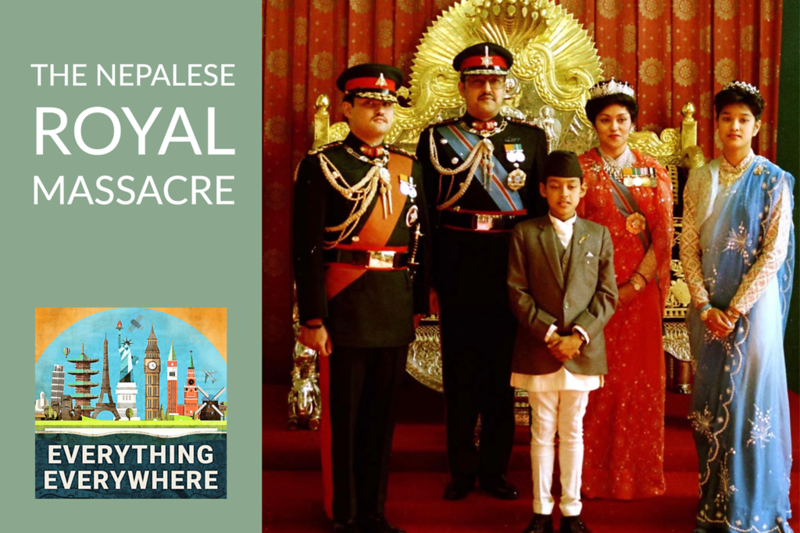 On June 1, 2001, the nation of Nepal was shocked at the announcement that 10 members of the Nepalese Royal Family were killed in a massacre inside the royal palace.

It wasn’t just a case of homicide, it was a case of regicide, patricide, matricide, fratricide, sororicide, parricide, and suicide.

It was a moment that changed the course of modern Nepal.

Learn more about the Nepalese Royal Massacre, on this episode of Everything Everywhere Daily.

To understand the events of June 1, 2001, it is necessary to get a brief background on the Nepalese monarchy.

The Kingdom of Nepal dates back to 1768 when Prithvi Narayan Shah united several kingdoms of the Himalayas under the kingdom of Nepal.

He was the first ruler of the Shah dynasty, which was the only dynasty that ever ruled Nepal.

For most of this time, it was an absolute monarchy. From 1846 to 1951, the king was mostly a figurehead. The country was run by a series of hereditary prime ministers, called the Rana Dynasty.

A revolution in 1951 was led by Nepalese who had fought for independence in India.

In the aftermath of the revolution, political parties were banned and the country returned to being an absolute monarchy.

In 1972, the Crown Prince Birendra Bir Bikram Shah Dev ascended to the throne at the age of 27 to become King Birendra.

Birendra was educated at Eton in the United Kingdom and later attended Harvard. Before he became king he explored Nepal on foot, staying in local homes without the trappings of royalty.

Under Birendra, in 1990, Nepal once again became a democracy and the monarchy went from being absolute to being a constitutional monarchy.

Six years later, a civil war began in Nepal when Maoist communist forces set out to overthrow the monarchy and establish a people’s republic aligned with China.

By all accounts in the year 2001, King Birendra was a popular monarch.

The immediate royal family at this point consisted of the King, Queen Aishwarya, their three children including the Crown Prince Dipendra, and the king’s five siblings.

The events which unfolded on June 1, 2001, are still not totally understood. The details of what happened are largely understood, although there is still some doubt, the reason why it happened is still a mystery.

The royal family was having their monthly dinner where everyone got together. It took place inside a smaller building on the palace grounds and as it was a private family affair, there were no security guards inside the dining room.

When the family assembled, Crown Prince Dipendra arrived extremely intoxicated. Reports were that he had difficulty speaking and began arguing with those in attendance.

The Crown Prince was then escorted to his private quarters by his cousin Prince Paras and his younger brother Prince Nirajan.

The family retired to a drawing room and broke into small groups to talk.

His first target was his father, the king. He shot him in the neck and in the stomach.

The Crown Prince left after killing his father, only to soon return to the room where he began shooting again.

The King’s brother Prince Dhirendra tried to stop him, but he was shot in the chest.

He then walked through the room shooting everyone he came across. He went into the adjacent garden where he found his younger brother and mother and shot them both.

The entire shooting spree, according to witnesses, only lasted about a minute to a minute and a half.

When the Crown Prince was done, he stood on a footbridge in the garden and shot himself in the head, although he didn’t die.

He killed nine members of the royal family.

Almost the entire line of succession of the Nepalese House of Shah had been killed.

As I mentioned, Crown Prince Dipendra didn’t die immediately. He was in a coma for the next 30 hours.

Oddly enough, despite killing his father, he became King Dipendra. He spent his entire reign in a coma before dying on June 4.

When Dipendra died, the crown was passed to King Birendra’s brother, Gyanendra who was not in attendance at the family dinner. Gyanendra had previously been king for two months when he was three years old from November 1950 to January 1951.

The monarchy was dissolved in 2008 and King Gyanendra is still alive today at the age of 74. There is still talk about reconstituting the Nepalese monarchy, but to date, nothing has happened.

The big question of course is what happened. Why did Prince Dipendra kill his family and then himself?

As he never came out of his coma, we have no first-hand testimony of his where he tried to explain his actions. However, based on reports of what happened between him and his parents, a plausible scenario had been created which might explain what happened.

Supposedly, Dipendra did have some psychological issues. As a boy he reportedly tortured animals on the palace grounds, which is often a sign of psychopathy.

He also never had a close relationship with his parents as most of his upbringing was outsourced to staff. Like his father, he was shipped off to Eaton in the UK where he went to school.

While in the UK he met a woman who he wanted to marry. A woman who, as his wife, would be the next Queen of Nepal. The woman’s name was Devyani Rana.

Devyani was a member of the Rana Dynasty which, as I mentioned before, used to hold the power in Nepal. On her mother’s side, she is from a minor royal family from Gwalior, India. She is the granddaughter of the last maharaja of Gwalior.

This greatly displeased the king and the queen who felt that Devyani’s family was not of high enough status. The queen especially was upset at his choice and threatened to remove him from the line of succession and to disown him. She wanted him to marry a distant cousin who was a member of the House of Shah.

Some speculate that another reason why his parents were against the marriage was because of Devyani’s Indian background. They felt that marrying an Indian would give too much influence to India in the Nepalese court.

Devyani’s mother was also against the marriage because the Nepalese royal family actually had less money than her own family. She felt she would be decreasing the level of comfort that she was used to living in.

The relationship between Devyani and Prince Dipendra went on for years, with the Prince hoping that his parents would eventually come around.

However, his parents never came around and by 2001, the relationship between the Crown Prince and his parents was at a breaking point.

On the night in question, he got drunk, snaped, and went on a rampage.

That is the conventional explanation for what happened, and at least to a distant observer such as myself, it at least seems reasonable.

However, it is a law of the universe that when things like this happen, there will be conspiracy theories surrounding it. So, it should come as no surprise that with something so momentous for the nation of Nepal, some people don’t find the conventional explanation to be believable.

One issue was that Prince Dipendra was very well-liked, and people just didn’t want to think that he was capable of such an act.

One conspiracy that has been floated was that it was someone else wearing a mask of the prince who committed the crime.

The Maoist Rebels in Nepal quickly placed the blame for the murders on ??India’s Research and Analysis Wing, which is their intelligence service, or the CIA.

Finally, there are facts about the incident which have fueled many of the conspiracy theories.

For starters, the Crown Prince shot himself on the left side of his head, despite being right-handed.

No autopsies were ever conducted, and ballistic evidence was burned along with the bodies.

Finally, the officials who conducted the formal investigation later said they were never charged with trying to assess guilt or to find the culprit. They were only charged with determining what happened, not who did it or why.

The Nepalese Royal Massacre, despite occurring in the 21st century, is one of the greatest massacres of royalty in history. Certainly the greatest since the execution of the Russian Romanov family over 80 years earlier.

It will certainly go down as one of the most significant events in the history of the nation of Nepal.

Today’s review comes from listener Dungeon Slammer over at Apple Podcasts in the United States. They write,

Wish I Could Give 10 Stars

As of writing this, I am one episode away from completing the entire catalogue. This podcast has filled my mind-hole with a wealth of knowledge. Who knew a Packers fan could be so smart…

Thanks, Dungeon Slammer. I assume by now you have listened to your final episode and have now entered the completionist club. I’d like to welcome you and let you know that you will be receiving your onboarding packet in the mail shortly.

Also, with regards to Dez Bryant, “after further review it has been determined that the receiver did not maintain possession of the football.”

So, there you go.  Also, the Packers will be extending their all-time record against the cowboys on November 13th to 21-17.