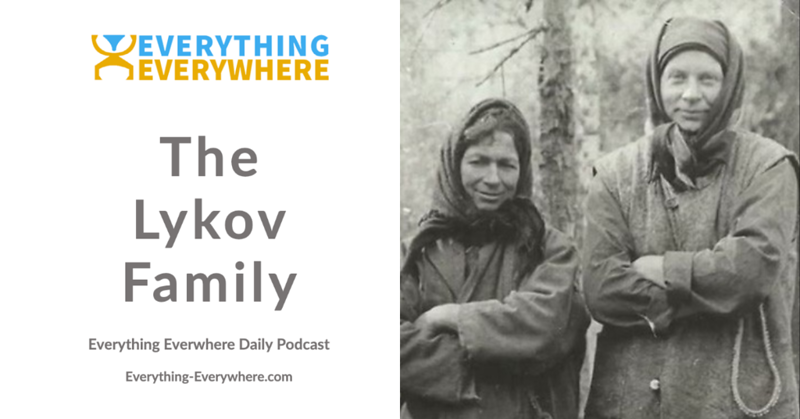 In 1978, a Soviet helicopter pilot flying over the forests of Siberia made an incredible discovery. Not far from the border of Mongolia, up the side of a mountain, he saw a clearing and signs of human habitation.

The location was far removed from any other humans. In fact, it was almost 250 kilometers to the nearest human settlement.

What they found there was astonishing.

Learn more about the incredible Lykov Family on this episode of Everything Everywhere Daily.

CuriosityStream has many original documentaries, including one of their latest, Return of the Wolves, which tells the story of wolves in Isle Royale National Park in Lake Superior, and the delicate balance of predator and prey with moose and wolves.

The story of the Lykov family starts in with the Russian Revolution in 1917.

The Bolsheviks who took power were atheists and the official policy of the Soviet Union was the promotion of atheism. This included the confiscation of church property, arresting clergy, and mocking and harassing devout religious followers.

That group is known as The Old Believers.

Karp and his family were Old Believers, which didn’t sit well with the powers that be in the Soviet Union.

In 1936, his brother was killed by government forces, and Karp got the hint.

Rather than betray his beliefs, Karp took his wife Akulina and two children, Savin and Natalia, and headed for the hills.

…and did they ever head for the hills.

The Lykov family went into the wilderness of Siberia and never returned. As far as Soviet authorities were concerned, they just disappeared.

The Lykov’s wound up in the southern part of the Siberian taiga, about 100 km from the border of Mongolia.

After they fled, they had two more children, Dmitry and Agafia.

These children were born and raised in the middle of one of the most remote and uninhabited places on Earth. They never saw another human outside of their family growing up.

Life in the taiga was rough. The metal pots they brought with them eventually rusted and they were forced to cook with birch bark. Knives and other tools also rusted or broke.

They didn’t even hunt as they had no weapons. When the youngest boy Dimitry grew older, they eventually began to set traps for animals. Dimitry could hunt barefoot in the winter and he was able to go on hunting trips lasting several days, without any shelter and minimal clothing.

Speaking of clothing, they eventually exhausted the clothes they brought with them. However, they did bring a crude spinning wheel with them and managed to create a crude loom out in the wilderness. They created shoes out of birch bark and they created cloth from hemp which they grew from seeds.

The home they lived in was nothing more than a one-room burrow in the hillside which was cobbled together with whatever they could find.

The family lived constantly on the edge of starvation. Animals ate what few crops they planted.

In 1961 it snowed in June and a late freeze destroyed all of their crops. The mother, Akulina, chose to starve herself to death so her children would have enough food to live.

There is one story that the family told which they described as a miracle. After their crops were lost, a single grain of rye sprouted. They zealously guarded that one sprout and from it got 18 grains of rye. From those 18 grains, they managed to rebuild their rye crop over time.

In 1978, a team of geologists prospecting for iron happened upon the Lykov family by accident.

They were in a helicopter looking for a spot to land where they could set up camp. They saw a clearing where one shouldn’t have existed, and the clearing had long trenches dug into the soil.

They landed about 10 miles away and hiked over to where they saw the clearing. As they approached, they saw signs of life. A trail, a log over a stream, and finally a shed.

The geologists documented their first encounter with the Lykov’s as follows:

beside a stream there was a dwelling. Blackened by time and rain, the hut was piled up on all sides with taiga rubbish—bark, poles, planks. If it hadn’t been for a window the size of my backpack pocket, it would have been hard to believe that people lived there. But they did, no doubt about it…. Our arrival had been noticed, as we could see.

The low door creaked, and the figure of a very old man emerged into the light of day, straight out of a fairy tale. Barefoot. Wearing a patched and repatched shirt made of sacking. He wore trousers of the same material, also in patches, and had an uncombed beard. His hair was disheveled. He looked frightened and was very attentive…. We had to say something, so I began: ‘Greetings, grandfather! We’ve come to visit!’

The old man did not reply immediately…. Finally, we heard a soft, uncertain voice: ‘Well, since you have traveled this far, you might as well come in.’

These were the first humans outside of their family which they encountered in fourty two years.

The daughters were terrified at first. When they offered the family food, they refused it. The only gift they accepted during the first meeting was salt, which they couldn’t find on their own.

The two sister’s Russian was barely intelligible to the geologists as they had never spoken to anyone else outside of their family before.

Over several more visits, the geologists got to know the family.

The father, Karp, had figured out that satellites existed because he began to see moving lights in the sky in the late 1950s, and he realized that something must have been invented which caused it.

The children, as it turned out, were literate, although the only book they had was a bible and a prayer book.

Over time, they did accept gifts as they got to know the geologists better. They willingly accepted knives, grain, and even a flashlight.

In 1981, within three years of their first encounter with the outside world, three of the four children died in quick succession.

The last remaining member of the family, Agifia, chose to remain at the family home in the woods.

She is currently 76 years old and is still there today.

One of the geologists actually moved to the valley where they lived and built a cabin about 100m away from the Agifia, but he passed away several years ago.

In 2016, for the only time in her life, she was evacuated to a city for medical treatment for a problem with her leg. She didn’t understand why there were so many cars as they made it hard to breathe.

A few years ago, a team from Vice.com set out to visit Agifia. A surprisingly complicated trip. She only requested that they bring two things with them: a chicken and a goat.